The Forever Date Of Nick Jonas

We all know that global icon Priyanka Chopra Jonas knows how to keep a good work-life balance. While bagging several movies back to back and with a hectic schedule, Priyanka never loses touch with her family and friends. Along with posting pictures from the sets of her movies, world always sees Priyanka and her hubby Nick Jonas standing by each other’s side, supporting and totally in love, giving some serious couple goals.

Earlier, when Jonas Brothers were busy with their ‘Happiness Begins’ tour, Priyanka kept her fans updated with behind the scenes photos, giving a glimpse of her vacay time with J-sisters. Unfortunately, the actress was unable to attend Video Music Award of MTV held at the Stone Pony, Newark, where Jonas Brothers came out as winners in the ‘Best Pop’ category.

When pictures of her hubby standing alone in the crowd from MTV VMA was going viral with people making fun of Nick’s loneliness, Priyanka immediately came to the rescue, showering Nick with love by photoshopping herself in the picture and captioning it, “I’m always with you @nickjonas 😜😍Congratulations @jonasbrothers! I’m so proud of all of you! #sucker”.

I’m always with you @nickjonas 😜😍Congratulations @jonasbrothers! I’m so proud of all of you! #sucker

Now, Priyanka is up with another post with her husband Nick Jonas sending a congratulatory note on his new venture ‘Villaone Tequila’. Entering the spirit game with John Varvatos, menswear designer, Nick now owns his own Tequila brand at the age of twenty six. On the launch event of ‘Villaone’ at Montauk, New York, Priyanka shared a glimpse of her chilling time with Nick along with her family and friends at the bonfire. She also wrote, “So proud. When you own your own tequila at 27! @villaone ❤”, while sharing a picture from their celebration time.

So proud. When you own your own tequila at 27! @villaone ❤

The lovey-dovey post by Priyanka received more appreciation when Nick, chose to ignore his wrong age stated by his wife and wrote, “My beautiful forever date”. 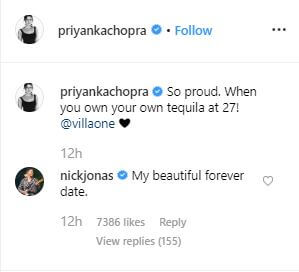 The post not only defied the age difference criticism that the couple  always faces but also showed that the Priyanka and Nick are head over heels in love with each other and these things don’t matter to them.

Meet The New Foodie Of Town!