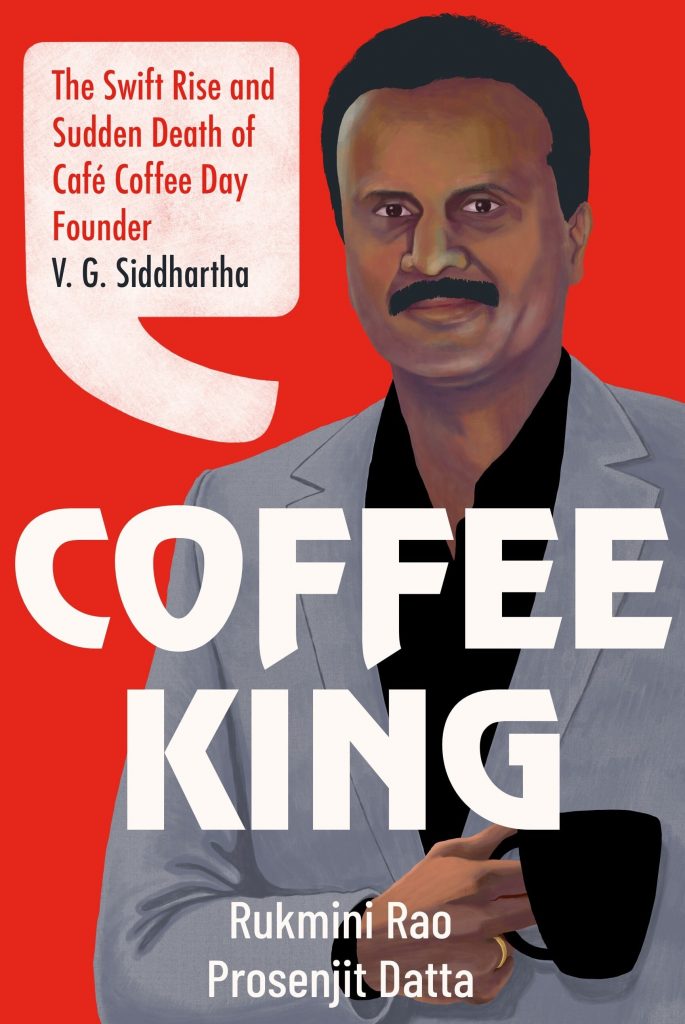 Coffee King is the definitive biography of the late V. G. Siddhartha, the founder of the Café Coffee Day retail chain and several other businesses. Known to be an extremely savvy technology investor,Siddhartha had also backed at a very early stage some of the marquee names in the Indian IT services landscape today. But by 2019, he was highly leveraged on both business and personal fronts and facing a liquidity crisis. In July that year, he died by suicide after jumping into the Netravati river. Siddhartha left behind a grieving and bewildered family, investor community and employee base, and a startled but curious media and public.

Through extensive research, hundreds of interviews and the analysis of thousands of official documents,Rukmini Rao and ProsenjitDatta now piece together the story of V. G. Siddhartha’s dynamic rise as a businessman and also his fall from grace, unravelling the reasons that led to his financial crises and eventually his shocking death.

The book was acquired at auction from Anish Chandy, Founder of the Labyrinth Literary Agency,

Commenting on the acquisition, Rukmini Rao says, ‘V. G. Siddhartha’s biography will offer much more than just the story of the man who created India’s biggest coffee chain. There were many facets to him that remain unknown. This book will bring all those aspects together to present a complex, holistic portrait.’

Prosenjit Datta says, ‘As we proceeded with the research for this book, we realised that the late V. G. Siddhartha had built an organization that was far more complex than what appeared on the surface. So we peeled the onion, layer by layer, in order toproperly understand the business tycoon’s professional and personal avatars and where the two intersected. He was a man of many contradictions, and few can say that they knew the real Siddhartha. We hope to present a more complete picture in Coffee King.’

Anish Chandy says, ‘Rukmini Rao and Prosenjit Datta have drawn a fully accessible portrait of V. G. Siddhartha and his labyrinthine business empire through exacting research, drawing upon their multi-decade investigative journalism experience. Pan Macmillan India has had a very impressive track record of publishing books in this genre in the last few years.’

Teesta Guha Sarkar says, ‘Consummate business journalists Rukmini Rao and Prosenjit Datta’s investigation into the life and death of one of India’s most intriguing business tycoons has culminated in a riveting, finely nuanced character study. The great depth of their research, combined with an empathetic approach, make this undoubtedly the most definitive book there may ever be on India’s coffee king.’

Rukmini Rao is a financial journalist who has reported extensively on Karnataka-based businesses for over a decade for both print and television media. A former lawyer, her journalism career spans over thirteen years, during which time she has worked with Business Today, CNBC TV-18, Bloomberg TV India and Times Now. She is the co-winner of the 2019 Polestar Award for Best Feature in Business Journalism. A coffee aficionado, she has been tracking Café Coffee Day for many years. Rukmini lives in Bengaluru.

Prosenjit Datta is a veteran business journalist with over three and a half decades of experience. He has previously worked with Economic Times and Business Standard and covered financial markets, big corporations, technology trends and the macro economy. He later went on to become Editor of Businessworld and Business Today, where he built award-winning teams that garnered every prize in business journalism in India,as well as several international ones. He is currently a columnist for Business Standard, New Indian Express and moneycontrol.com. Prosenjit lives in Delhi.

Early pre-orders can be placed at this link: https://amzn.to/3pBSGy7

Top Co-ord Sets for Every Occasion