The big 50th year Anniversary! The Legendary Copper Chimney gears up to celebrate a pivotal milestone in its culinary history

Copper Chimney launches a new Limited Edition Autograph Menu as a tribute to its founder Mr JK Kapur, featuring new dishes made with his secret recipes alongside the brand’s best-seller classics over the past 5 decades. 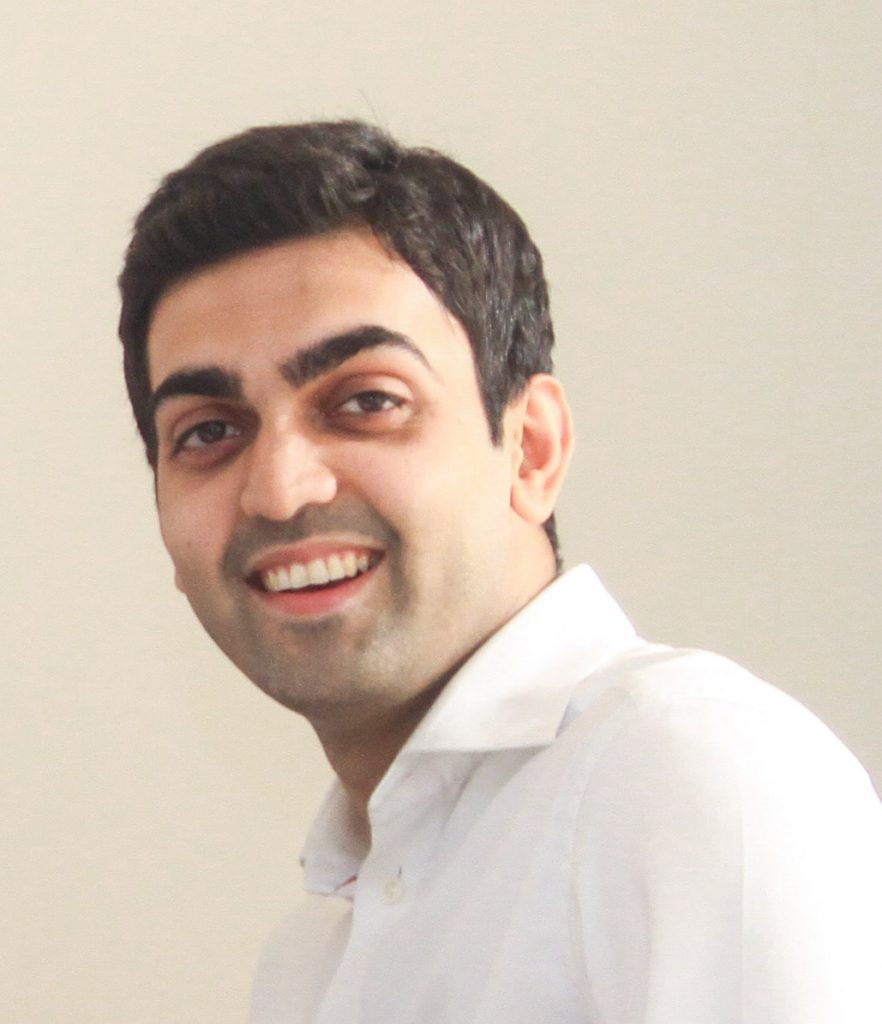 To celebrate the milestone, expect a special 50% discount for the first 50 guests for dinners every day, this entire month of November.

The year of Partition

The year was 1947 – the year of the Partition. Among those migrating across the border from Pakistan to India, was a young man J.K. Kapur, making his way from Lahore to a newly independent India. At the time, little did anyone know that the memories this young man carried across the border with him would lead him to the start of a 50 year strong legacy – of the now legendary Copper Chimney.

As a refugee, leaving his home behind, young J.K. Kapur could carry little with him but a few essentials & memories of the flavours he grew up with.

For 25 years, Mr. Kapur held these food memories of his years growing up close, keeping them intact and undimmed in his heart & mind.  The taste of his mother’s home-made “maa ki dal” cooked overnight on a small home-made “chula” fired with coal, in the backyard of his house, was one of the many dishes from his youth that remained with him throughout his life.

In 1972, Mr. J.K. Kapur put together a team with whom he shared the secret recipes that he had been meticulously perfecting in his home kitchen, recreating the food inspired from his roots down to every detail over the past 25 years.

These Chefs whom he trained to be Masters called Ustads, internalized the secrets and mastered the art of no compromises when it came to ingredients, cooking techniques and flavours inspired from the dishes of an undivided India, from Peshwar to Delhi.

Everything was produced from scratch, each curry was simmered for a precise number of hours, each grill was marinated in its own home-made secret spice mix, saffron scented biryanis were layered with perfection and each bread was skillfully handcrafted.

And thus in November 1972, began an exciting journey – the one of the now legendary Copper Chimney. And the rest, as they say, is history. Today, Copper Chimney is considered a signpost in the nation’s Indian culinary landscape and an iconic brand that has carved a household name over the last 50 years serving four generations of diners, from Bollywood celebrities to India ‘s most prominent families and more. 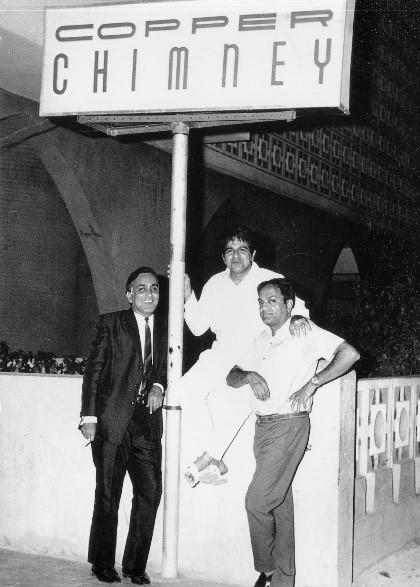 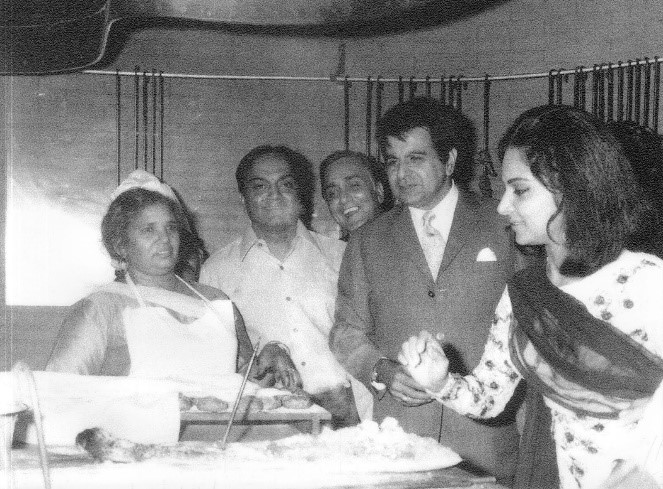 The first Copper Chimney was inaugurated by the legendary actor, the late Shri Dilip Kumar. It was the first restaurant in India to have a show kitchen where the diners could watch the iconic roomali rotis being tossed in the air by the Ustads

The restaurant in the ’70s was helmed by Chef Tari, the first female Chef in an era where female chefs were unheard off; she dished out some of the most memorable tandoori rotis to guests.

Copper Chimney introduced dishes to India such as the legendary Burrah Chops from the Khyber Pakhtunkhwa region, the Iranian-inspired Chelo Kabab and the Smoked White Pepper Chicken Chop delicately flavoured with Baluchi spices. Copper Chimney’s unique version of the black dal, based on JK Kapur’s mother’s signature recipe was introduced and is known as the Dal Maharaja. The Multan-inspired Paneer Tikka, with Copper Chimney’s softest melt-in-your-mouth paneer, is unparalleled and par excellence in the country, and the signature Kadak Roomali, is another Copper Chimney original since 1972.

Many of Copper Chimney’s unique dishes from 1972 have been loved and enjoyed by the likes of Dilip Kumar, Dev Anand and other legendary actors, who have patronized the doors of Copper Chimney over the years.

A tribute to J.K Kapur, featuring new dishes made with his secret recipes alongside the brand’s best-seller classics over the past 5 decades.

During the partition, Mr J.K Kapur migrated from Lahore to a newly Independent India, he would often reminisce his childhood memories of food – dishes he savoured and the rich aroma of the street foods he missed.

The Autograph Menu features new dishes and best-seller classics over the decades capturing the food stories and fond memories of the flavours he grew up with.

Each dish in the menu is a narrative of a rich culinary culture and legacy of an undivided India.

The popular street food made on open pits by the local ‘kababchis’.  The Mutton Kalia and the Parda Chicken Kabab are inspired by street kababs.

The Himalayan Gucchi Pulao in the Autograph menu features the exotic black morels or Gucchi from the foothills of Kashmir. This pulao was made and savoured on special occasions and was considered a dish prized for its distinct earthy and smoky flavour. The essence of Kashmir is also highlighted in the Subz Akhrot ki Seekh which is flavoured with crunchy walnuts and seasoned with authentic spices and an unique dip garnished with Kashmiri Chili Rogan.

The menu brings diversity with influences across the Undivided North of India. Blended with the local flair of the North West Frontier Province, the Raan Peshawari originates from the campfires for the warriors and tribes. Rubbed with Copper Chimney’s signature spices and steeped overnight, it is slowly roasted to perfection. The Autograph Menu also features the popular recipe from the streets of Peshawar, the Pashtuni Chicken Yakhni Pulao which has an aromatic effervescence of a signature Pathani spice mix and is garnished with afghani red berries.

In remembrance of the local bread makers of Peshawar called ‘naanbais’, the Kabuli Naan is a Afghani influenced bread with mildly sweet flavours and garnished with nuts and dried fruits.

Connecting past to the present, the Autograph Menu rekindles nostalgia with dishes that speak of the rich culinary era that was. The Palak Goolar Kofta covered with ‘Varq’ an edible silver leaf, is cooked in a luscious almond cashew gravy. The Royal Chicken Kofta is an inspiration from the Maharajas kitchens in the Punjab Province. The dhoda barfi that originated in 1912 as an energy food for local wrestlers of Undivided Punjab is featured as the Baked Dhoda – Copper Chimney’s version of a chewy, milk fudgy barfi served with a saffron sauce.

Last but not least, the tangy Kashmiri Soda gathers inspiration from the sodas sold by pushcart vendors in the by lanes of Lahore!

Every day for dinner, the first 50 walk-in guests would receive a 50% discount on their entire meal,

For 50 years, Copper Chimney has created exhilarating food experiences arising out of perfected, legacy recipes. Copper Chimney’s essence is it’s taste, the secret recipes are its lineage and its reputation is on your plate.

Copper Chimney is owned by Charcoal Concepts, a platform for specialist Indian food and beverage, founded by K Hospitality Corp. The company has a clear vision to conceptualize, incubate, develop and grow leading brands for Indian food and beverage and has presence across India, the Middle East and the UK. Under its umbrella are some of the leading, award-winning Indian cuisine brands, including Copper Chimney, Bombay Brasserie, Bombay Borough, and Joshh – its latest venture in the Indian QSR space.