Team India Is Set To Lock Horns With England

The Virat Kohli-led Indian team is back on the ground after clearing all the three RT-PCR tests for coronavirus which were conducted at regular intervals and the players were tested negative too.

Ahead of the four match Test series against England, the Men in Blue have started out with their outdoor training session in Chennai. The England team led by Joe Root have also cleared the COVID tests after a six day quarantine and began training at the MA Chidambaram Stadium.

With the Test series starting out from 5 February, Head coach Ravi Shastri welcomed the entire squad by giving a rousing speech and then the entire team hit the nets to prepare for the series. Amidst practice, skipper Virat Kohli also spoke to the boys to boost their confidence and prepare them for the long series against the English team.

#TeamIndia captain @imVkohli speaks to the boys as our preparations begin.💪 #INDvENG pic.twitter.com/yt8wcwROFF

On the first day after quarantine, the Indian team got into a fitness routine where you can see the players run around the ground and be involved in various exercise regimes. BCCI shared pictures of the same, have a look:

Out and about at The Chepauk after 6 days of quarantine.#TeamIndia pic.twitter.com/mt7FShNFrb

Looks like Virat Kohli is happy to be back on the ground after a month long paternity leave. All set to lock horns with England, the Indian batsman shared a collage from the training session on his Instagram story, see: 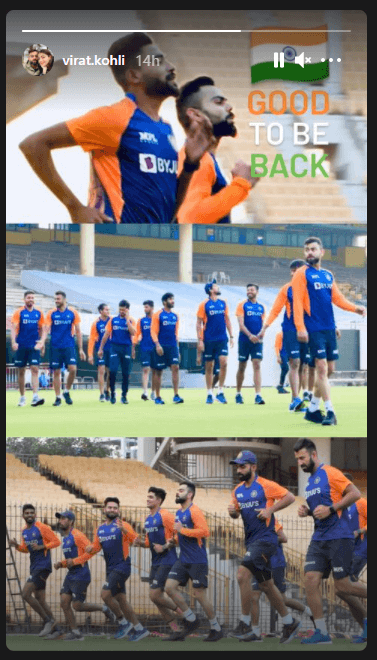 And Filming of ‘Adipurush’ Begins!