Thor Gets A Fan Stuntman

Chris Hemsworth’s South Asia journey for his upcoming Netflix movie ‘Extraction’ has been full of surprises.

Not only had he the chance of roaming around in the streets of Mumbai, Ahmedabad and Dhaka, he also found a new motorbike stuntman for himself.

In a recent video posted by Chris on his social media account, the actor can be seen being followed by one of his fans in Dhaka who is on motorbike waving at Hemsworth for an autograph. And just a few moments later, the guy comes along with a bunch of his friends and starts following Chris Hemsworth once again.

Seeing the persistence of his fan, Chris also jokes by stating, “Persistence pays off – not only did this guy get an autograph, he also does all my motorbike stunts from now on.”

Persistence pays off – not only did this guy get an autograph, he also does all my motorbike stunts from now on.

Well, to be honest that’s the aura of Chris Hemsworth! No doubt why he was the God in Marvel series. And even Rudhraksh Jaiswal who is playing the role of Ovi in the ‘Extraction’ movie agrees with us.

On Hemsworth’s latest Instagram video even he commented praising the actor by writing, “We are your huge fans🤙😇 @chrishemsworth sir

We love your characters and your films

You portray them with such uniqueness❤️❤️ love you! 🔥🔥🔥 miss you” 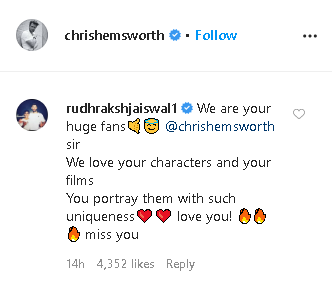 E-Tour To Satisfy Your Traveler Itch