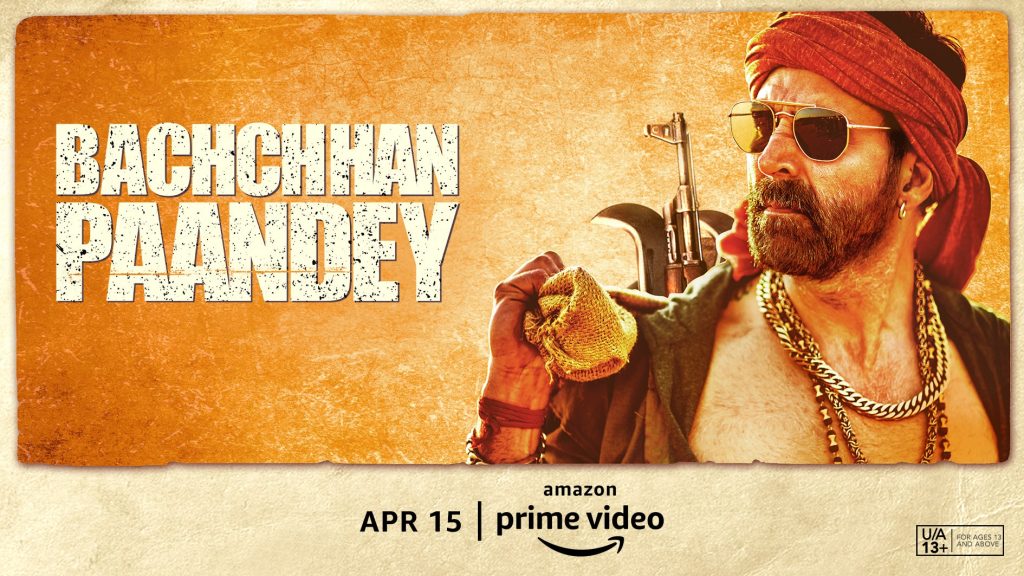 Prime Video today announced the exclusive streaming premiere of Akshay Kumar’s action-comedy Bachchhan Paandey. Directed by Farhad Samji and produced by Sajid Nadiadwala, the film also stars Kriti Sanon, Bobby Deol, Jacqueline Fernandez, Arshad Warsi, Riteish Deshmukh. It is a gripping story that involves a gangster ‘Bachchhan Paandey’ (Akshay Kumar) and an aspiring director, Myra Devekar (Kriti Sanon) who decides to make a biopic on a real-life gangster. Her extensive research leads her to one name, the most menacing, one-eyed ‘Bachchhan Paandey’ of Baghwa. Things take an interesting turn one day when she finally gets the chance to gain an insight into Bachchhan’s life by getting caught by him. Bachchhan Paandey will be available to stream in India and across 240 countries and territories worldwide on the service starting April 15, 2022.
“Bachchhan Paandey is an out and out comedy-entertainer and I am quite excited to bring this film to the audiences who’ve missed out on their dose of entertainment,” said Akshay Kumar. “Filled with a whole lot of action, drama, and comedy, the audiences can enjoy the film from the comfort of their living room premiering on Prime Video on 15th April. I hope you enjoy watching the film as much as we enjoyed filming it!”

Prime members will be able to watch Bachchhan Paandey anywhere and anytime on the Prime Video app for smart TVs, mobile devices, Fire TV, Fire TV stick, Fire tablets, Apple TV, etc. In the Prime Video app, Prime members can download episodes on their mobile devices and tablets and watch anywhere offline at no additional cost. Prime Video is available in India at no extra cost with Prime membership for just ₹1499 annually or ₹179 monthly, new customers can find out more at www.amazon.in/prime and subscribe to a free 30-day trial.

Tips to control sugar intake and manage your gut and skin this Summer.