Hublot and Chelsea FC celebrated their long standing partnership with the launch of a new Classic Fusion Chronograph Chelsea FC limited edition timepiece high above the London skyline at One Blackfriars. Hublot CEO Ricardo Guadalupe and Chelsea FC players (Cesar Azpilicueta, Willy Caballero, Ruben Loftus Cheek, Christian Pulisic, and Antonio Rudiger) arrived by boat from Stamford Bridge having passed several iconic London locations and were greeted by a round of applause from the invited guests.

Guests were treated to a 360° view of the iconic London skyline from the exclusive event space, open to the public for the first time. Chelsea FC’s signature blue colour draped the elegant interiors and a cutting-edge virtual reality experience allowed guests to seamlessly interact with the attending players. A striking blue light-show and drummers marked the reveal of the new Hublot Classic Fusion.

Chronograph Chelsea FC, a tribute to the exquisite watchmaking of Hublot and the victorious spirit of Chelsea FC. The footballers and guests interacted with the timepiece and continued to enjoy the spectacular views of central London, the home of Chelsea FC.

The new limited edition Classic Fusion Chronograph Chelsea FC follows two previous successful editions created in partnership with the celebrated football club. The timepiece showcases Chelsea FC’s signature blue through the innovative use of coloured ceramic. The 45mm case and bezel showcase a deep satin-finished and polished blue ceramic, combined with a blue dial with silver counters. The watch is powered by the HUB1143 self-winding chronograph movement with a 42-hour power reserve and the finishing touch is provided by the lined blue rubber strap and Chelsea FC logo. The timepiece is limited to 100 pieces and engraved with « Limited Edition 100Num » and « Pride of London », perfectly tailored to complement the wardrobe of a dedicated Chelsea FC supporter. 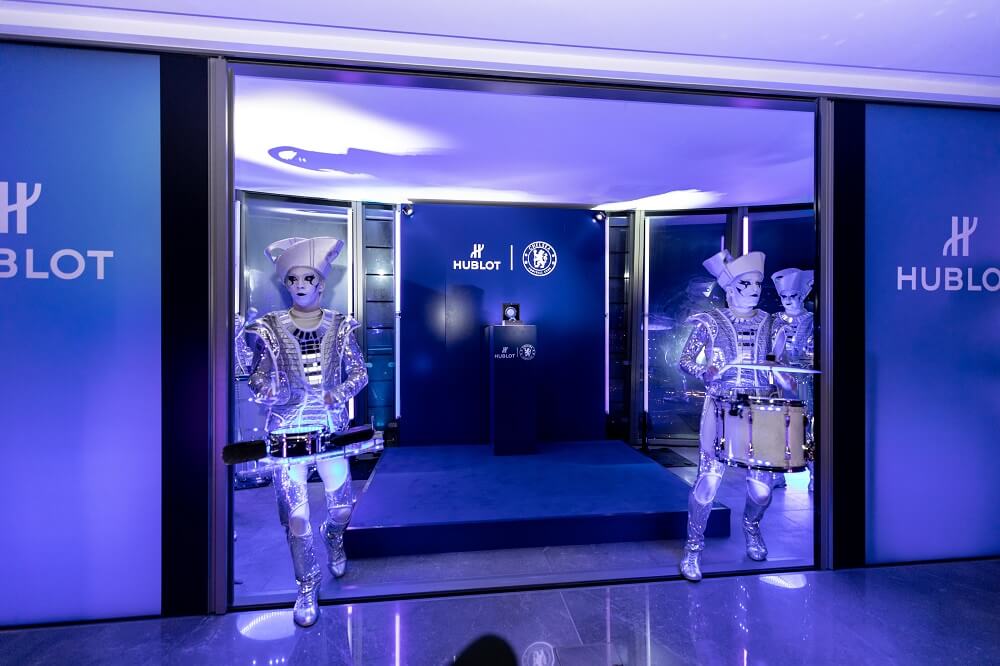 “The partnership between Hublot and Chelsea FC continues to go from strength to strength.

The new Classic Fusion Chronograph Chelsea FC is the third limited edition created in association with the legendary club. The timepiece embodies the vision of Hublot and Chelsea FC to lead the way in their respective fields. The bold watch is a reflection of the style of football Chelsea FC plays and has been created as a piece fans can wear with pride in support of “the Blues”. Hublot has a great partnership with Chelsea FC built over the years and a reflection of our commitment to excellence in football. Next year Hublot will be the Official Timekeeper of the UEFA Euro 2020, an exciting moment for Hublot and European football.”

“We are delighted to be Hublot’s first club partner to launch a third limited edition design. Each limited edition so far has held a unique story for the Club and this piece is no different. The young, bold and vibrant blue design is a great reflection of the style of football we are currently playing. For our fans who are so proud to be a Blue, this design demonstrates that pride perfectly. We’d like to thank Hublot for this special design and their continued partnership.” 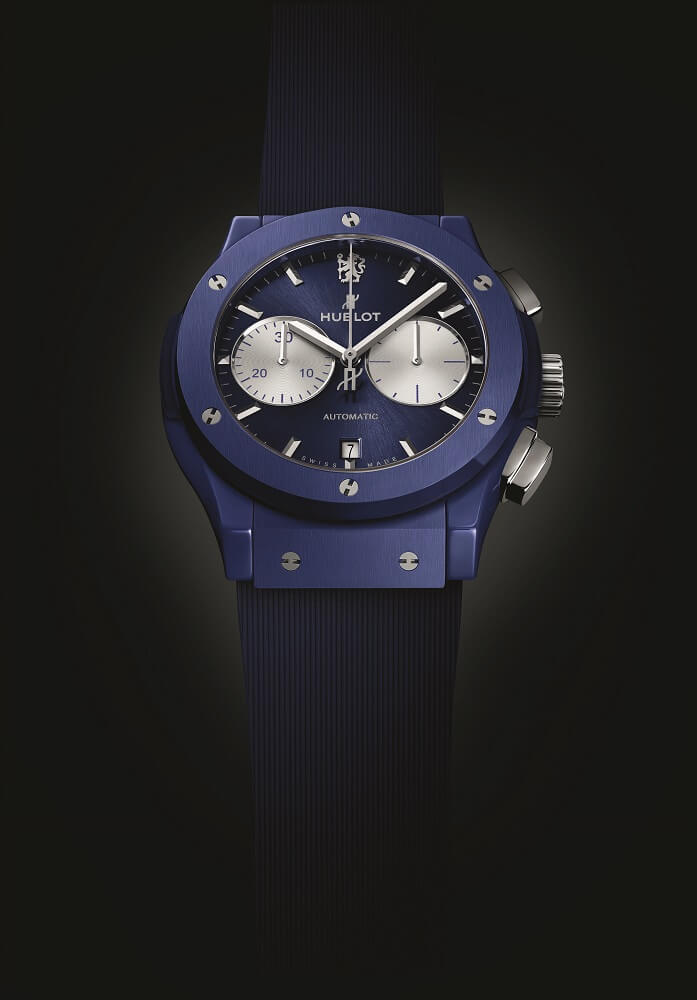 Nicknamed « The Blues » and founded in 1905 Chelsea FC are five-time English Premier League champions and have also won the FA Cup seven times, the Football League Cup five times, the UEFA Cup twice and the UEFA Super Cup as well as the Football League Championship once each. Chelsea FC was the first club to ever hold both the Champions League and Europa League wins at the same time. Their home ground Stamford Bridge is one of London’s most iconic landmarks. The Hublot partnership is a homage the club’s illustrious football legacy, showcasing Hublot’s deep connection to the world of football. Hublot was the first luxury brand to invest in football in 2006, and has a close cooperation with FIFA and UEFA as the Official Timekeeper as well as key European clubs.

The launch of the Classic Fusion Chronograph Chelsea FC was an opportunity to bring together guests and friends from the world of football to celebrate the fruitful and ongoing partnership and Hublot’s love for football.

Hublot, there for every Chelsea FC game and every victory. 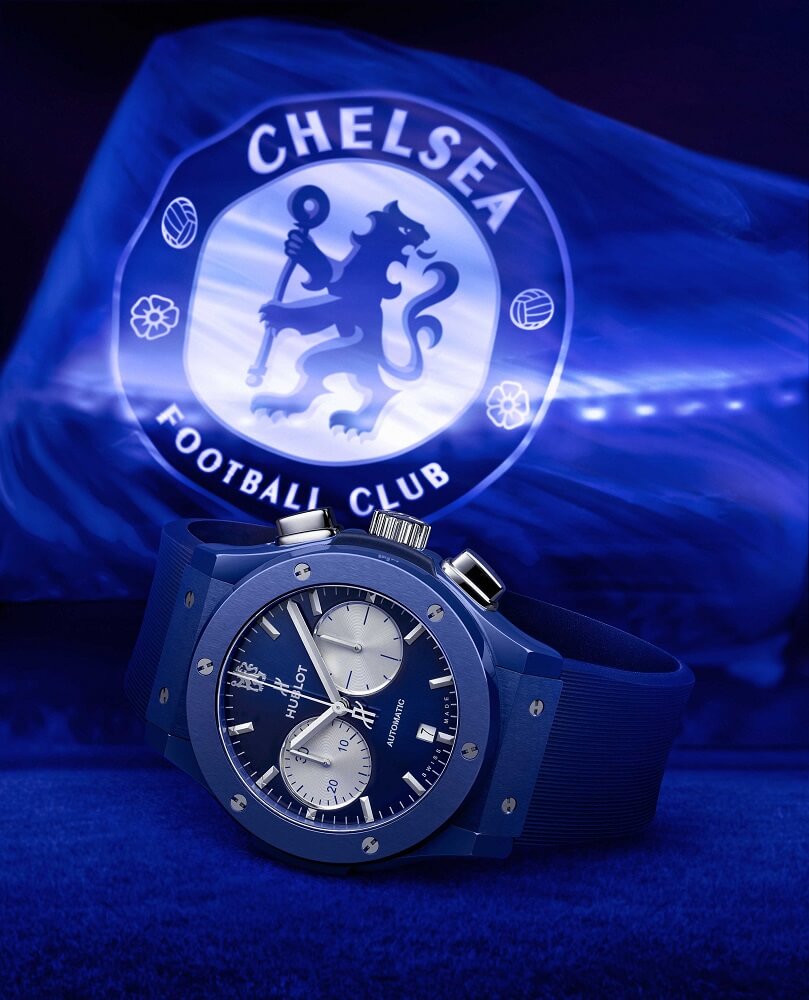