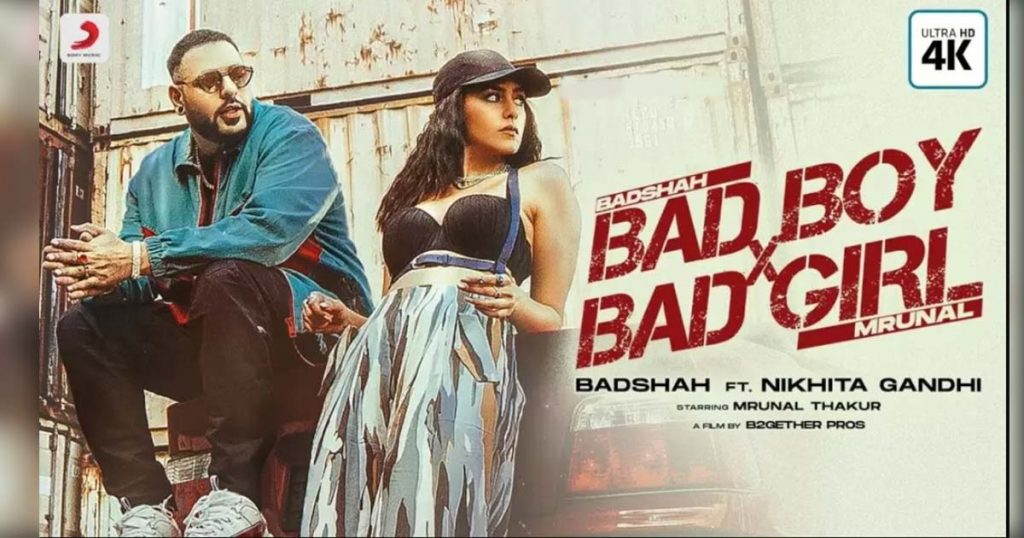 Among the rapper’s last few singles, ‘GendaPhool’ topped music charts with more than 850 million views, and remains an audience favorite to date. Badshah’s signature swagger and relatable lyrics combined with Nikhita’ssensuous vocals and Mrunal’sall-new look & groovy moves make Bad Boy x Bad Girl the ultimate club jam and party starter. The music video has been shot against a stylized industrial set-up which is complimented by never seen before automobile features.

Released on Sony Music, ‘Bad Boy X Bad Girl’, features an unforgettable rap by Badshah. This is the first time Badshah has collaborated with Mrunal Thakur, and their chemistry has set the song on fire!
Kicked about the release, Badshah says, “Bad Boy X Bad Girl’ is a groovy, playful tease that makes you want to let your guard down, break those boundaries, and have some fun! All of us have an un-explored wild side and sometimes it’s great to leave all your worries behind and enjoy the moment. It’s been a pleasure to have Nikhita’s vocals on the song and I had a fantastic time shooting the music video with Mrunal. She looks great! We hope the audiences are ready to #BeBad and enjoy the relatable lyrics and groovy sound on ‘Bad Boy x Bad Girl’ just as much as we have enjoyed creating this for them.”

Sharing her experience of collaborating with Badshah for the song, Mrunal Thakur added, “The moment Badshah made me hear Bad Boy X Bad Girl’, I knew I wanted to do this! It’s such a catchy number and very different from anything that I have done before. My look at the song and my performance is a surprise for my fans and I hope they like it. It was truly a delight to shoot with Badshah and I’m so excited about my first ever music video release. Show some love!”

“I’m excited about my first non-film collaboration with Badshah, hopefully, the first of many! It was a great fit. I sent Badshah the first recording that I did at my home studio, then we met and jammed together and recorded some parts again. And here we are! The song is a sassy dance number right in time for the festive season. The music video looks amazing and I can’t wait for the audiences to hear it.” says Nikhita Gandhi. Nikhita is a versatile playback singer who has worked on popular films including‘Laxmii’, including the title track of “Raabta” and songs from “Jagga Jasoos, “Jab Harry Met Sejal” amongst many more.

Style Meets Sustainability: Introducing all-new collections by Skagen for Him & Her