Riding high on Christmas spirit, Sheraton Grand Bangalore Hotel at Brigade Gateway, Bengaluru, held a traditional cake mixing ceremony to mark the onset of the Christmas season. Around 80 people participated in the event and enjoyed it thoroughly. More excitement was added to it with socialites, bloggers, and influencers, whose camera and gleeful laughs did not stop during the entire event.

As I entered the event, I saw the whole place well set, oozing out the Christmas vibe with a singer crooning the tunes of George Michael’s ‘Careless Whisper’. The entire gallery was buzzing with people greeting each other and eagerly waiting for the mixing ceremony to begin. Two long tables of numerous big black and white bowls were set with over 160 kgs of dry fruits and nuts. Around 70 litres of alcohol was also used in the cake mix. 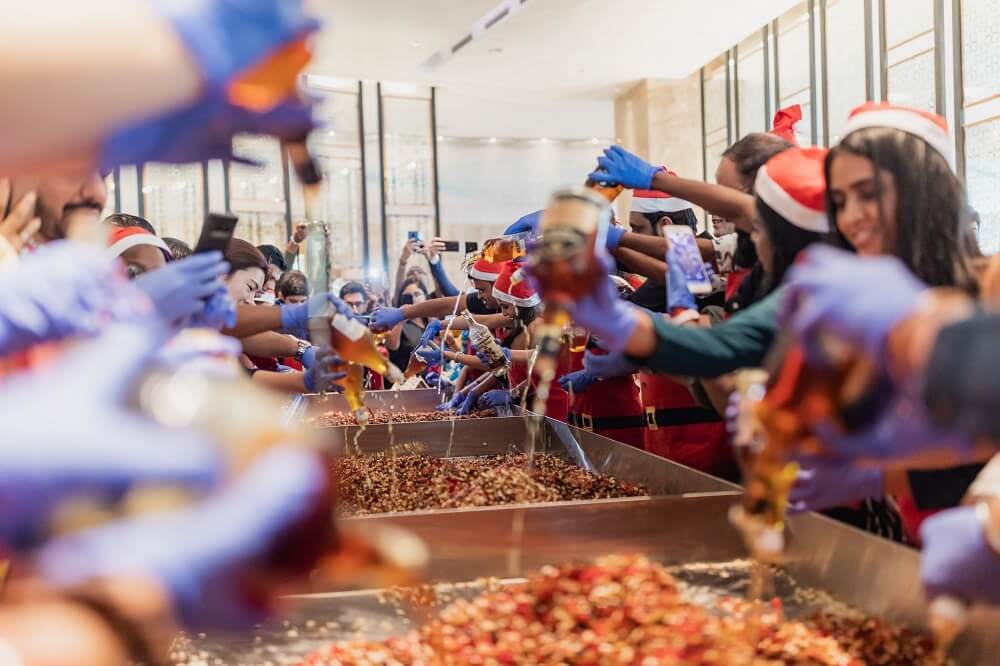 To bring in more helping hands and make it memorable for every age group, two separate mixing counters were curated: one for adults and another one for the children that had various varieties of juices which kids really enjoyed pouring in while mixing the dry fruits.

The event kick-started with a small thanking speech of Mr Rishi Kumar, Director of Operations, who himself dipped his hands in the cake mix. For all the attendees, red aprons and red and white Christmas caps were arranged that gave a Santa vibe to everyone. The entire space was lit up and decorated with lights, small jingle bells and other Christmas decors with an occasional serving of several juices and small bites to the visitors. The whole Christmasy vibe was lifted with ‘Jingle Bell’ chime that garnered more cheer from the people. 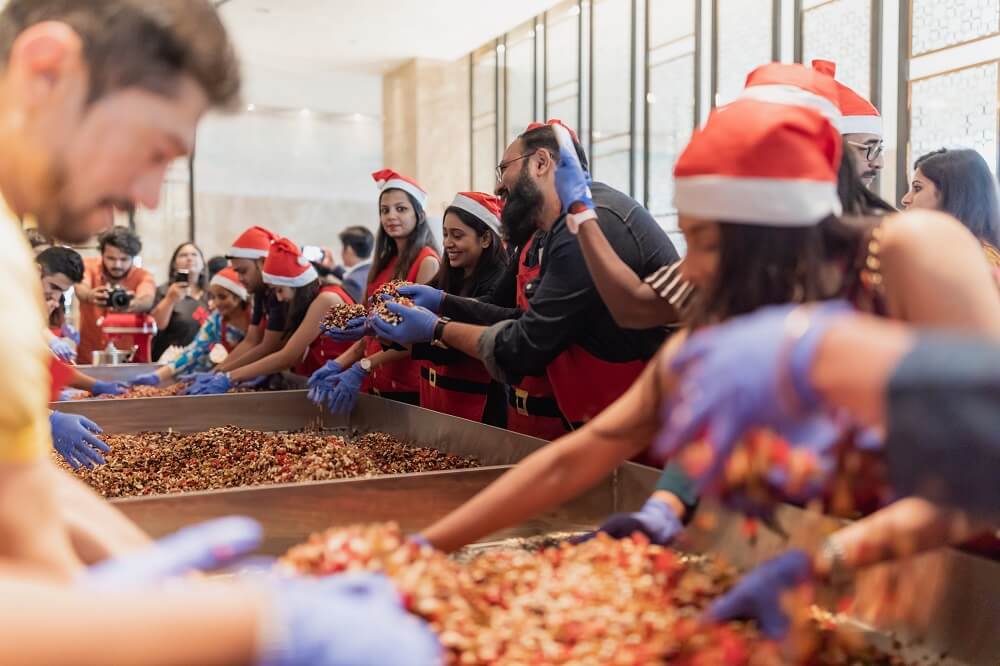 As the mixing ceremony concluded, the ever courteous hotel staff also came in to join the festivity and posed for the cameras.

The Director of Operations at Sheraton Grand, Brigade Gateway also shared his thoughts on the event. With all the enthusiasm, he said, “It was a wonderful event for us, it’s marking the occasion of the festivities that starts. It’s an event that we do annually and invite all our guests and team members. It’s a joyous occasion where all of us mix together and soak the fruits for the upcoming season. We also handover a small memento in the form of a voucher which our guests, who have participated with us, can bring back to collect the wonderful cake baked with the mix.”

He also shared the idea behind the entire event as he said, “We at Marriott, believe that we need to be socially connected and have to be very astute in participating and curating events which mark a lot of celebrations.”

Post cake mixing ceremony, a lunch buffet was arranged by the hotel for all its attendees where visitors indulged in the sinful cuisines from across the world and bloggers got more content for their social media feed.