Tribute to Sridevi – Book’s Cover Is Out!

What better than remembering the legacy of India’s first female superstar Sridevi than through a book dedicated to her?

As a tribute to the late actress on her birth anniversary yesterday, Bollywood actress Vidya Balan shared the cover of the book featuring Sridevi on Instagram, captioned, “I am honoured and delighted to officially launch the Cover of the Penguin book on the iconic SRIDEVI on her 56th birthday today titled, SRIDEVI: GIRL WOMAN SUPERSTAR commemorating the legend’s larger-than-life magic spread over five decades. Congratulations to author @satyarthnayak andthe @penguinindia mavericks @mileeashwarya19 and @chaudhurishantanuray. A big hug Boneyji !! HAPPY BIRTHDAY Sri Ma’am!! 💌

I am honoured and delighted to officially launch the Cover of the Penguin book on the iconic SRIDEVI on her 56th birthday today titled ,SRIDEVI: GIRL WOMAN SUPERSTAR commemorating the legend's larger-than-life magic spread over five decades. Congratulations to author @satyarthnayak and the @penguinindia mavericks @mileeashwarya19 and @chaudhurishantanuray. A big hug Boneyji 🤗!! HAPPY BIRTHDAY Sri Ma’am 💌!! #OneOfAKindStar #TheOne&OnlySridevi #EternalSridevi

The book, ‘Sridevi: Girl Woman Superstar’, will be out in October this year. The author and screenwriter is Satyarth Nayak, published by Penguin Random House India, with the approval of Sridevi’s husband Boney Kapoor.

The book chronicles Sridevi’s journey as an actress, who gained immense popularity by becoming the first female superstar, in a very patriarchal film industry, at a time when women actresses were always the accessory of the leading men, but rarely the stars themselves.

This book not only deals with her legendary innings in Hindi Cinema, but also delves deep into her iconic body of work in Tamil, Telugu, Malayalam and Kannada cinema. It will also give an insight into her second innings in Bollywood, when she made a big comeback with Gauri Shinde’s ‘English Vinglish’ (2012) and about the National Award for the Best Actress category for ‘Mom’ in 2018, her last movie as a lead actress.

Sridevi was the quintessential superstar known for her screen presence, comic timing, versatility and beauty. Till date, she lives in the hearts of millions of her fans and this book is a gift for her fans.

Also, this is Satyarth’s first non-fiction book. His debut novel, ‘The Emperor’s Riddles’, released in 2014 and his short stories have won the British Council Award and appeared in Sudha Murthy’s Penguin anthology ‘Something Happened on the Way to Heaven’.

Sridevi passed away last year on 24 February. On 13 August 2019, many members of the film fraternity remembered the actress and paid homage to her on her birth anniversary.

Today is a bittersweet day as we celebrate you on what would have been your 56th Birthday…We feel the sadness of your loss deeply, but remembering your smile and the joy you brought to all our lives unites us in your memory…We miss you everyday #Sridevi! pic.twitter.com/O8XwPUQGy4

Happy Birthday Jaan, missing you every minute of my life , keep on guiding us , you will remain with us till eternity. #Sridevi pic.twitter.com/pGPhgbmcBN

Here’s remembering the ever gorgeous #Sridevi on her birth anniversary. You’ll always be with us. pic.twitter.com/YCGCkGFHOc

Remembering the glorious lady of Bollywood, who stunned everyone with her beauty, grace & acting – #Sridevi. pic.twitter.com/RhSM3FDgsL 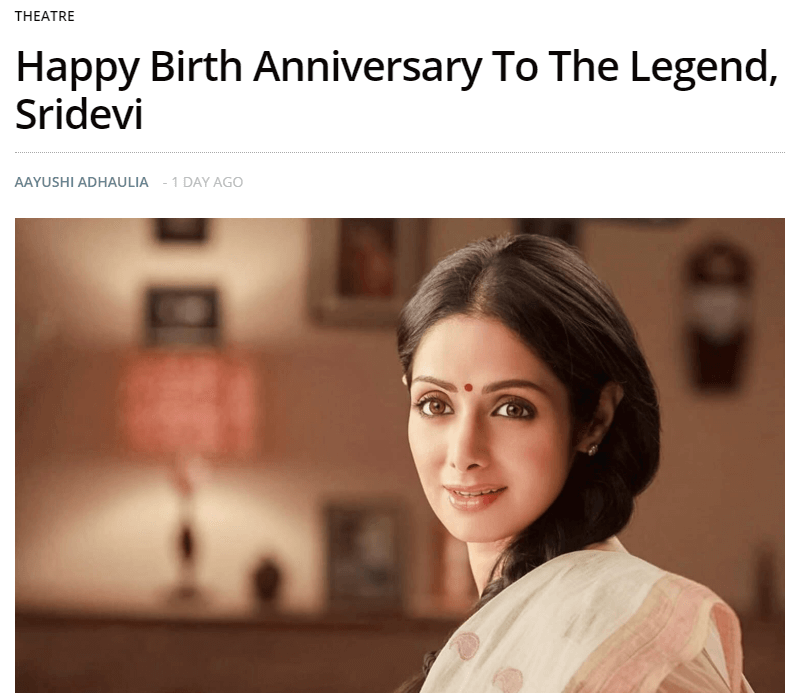