Rainbow Spotting On The Sets Of ‘83’

Ranveer Singh and the entire team of ‘83’, is currently shooting for the film in London. They have been posting a lot of stills and behind-the-scenes pictures on their social handles to keep updating their fans.

Recently, the ‘Gully Boy’ actor shared a beautiful scenic picture from the sets of the film on his Instagram story, giving his fans a view of the site. In the picture, Ranveer is seen standing on the middle of the green ground, spotting a rainbow and enjoying the cloudy weather. He quoted the picture as, “Rainbow spotting #onset @83thefilm.”

Check out the beautiful view here: 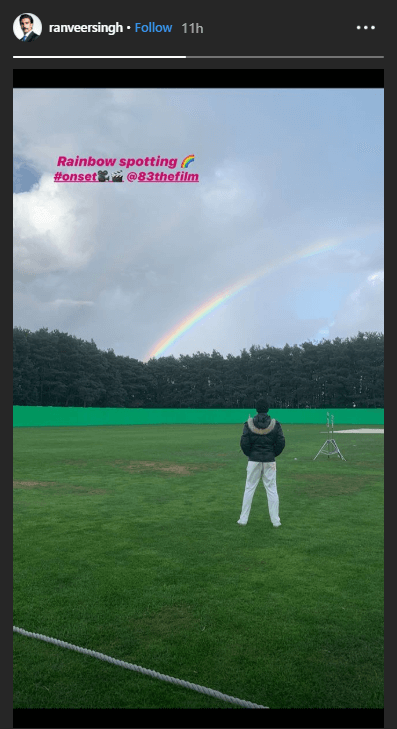 Directed by Kabir Khan, ‘83’ is an upcoming drama-sport film based on the life of Indian cricketer, Kapil Dev and the Indian national cricket team who won 1983 Cricket World Cup. The film will star Ranveer Singh as Kapil Dev and his real and reel-life partner Deepika Padukone as Romi Bhatia (Wife of Kapil Dev).

‘83’ is scheduled to hit the theatres next year on 10 April.