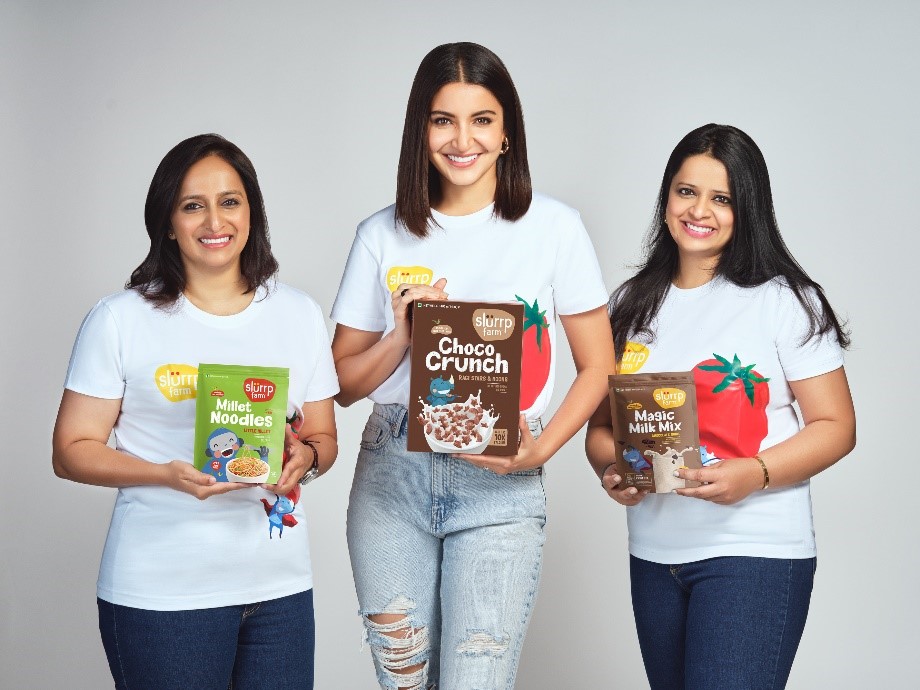 As part of this strategic partnership, Anushka Sharma joins Wholsum Food as an investor, brand ambassador and advocate for flagship brand Slurrp Farm, and all future brands Wholsum Foods will launch as it grows to become a house of brands.

Anushka Sharma is a lifelong advocate of healthy, conscious choices. Now as a new mom herself, her values strongly align with that of Wholsum Foods’ core purpose – developing millet-based products with zero junk ingredients that are better for us and our planet. The investment comes at a time when consumers across the world are rediscovering the wisdom of ancient Indian millets like ragi, jowar, and bajra.

Wholsum Foods was founded in 2016 with the launch of Slurrp Farm, a brand that draws on the power of millets to provide healthy, yummy, and natural snack and mealtime options for young children and their parents. The company was born when co-founders, Meghana Narayan and Shauravi Malik became mothers themselves and realised that there was a dearth of high-quality and nutritious food options for young children.

Speaking about the partnership, Anushka Sharma said, “I’ve always believed you are what you eat – real, wholesome, sustainable food choices go a long way in setting the tone for a healthy and happy life. It’s a realization that hit home even harder after I became a mother – I want my daughter to develop a healthy relationship with food and I have to start her on that journey early on. Wholsum Foods was started by two mothers so their mission to unjunk the plates of kids and families across the world resonates with me strongly. At the heart of this mission are millets, an ancient hardy grain packed with nutrients, making it good for us and good for the planet. Through the partnership, I hope to help nurture India’s rich heritage of millets, and enable today’s generation to leave behind a healthier lifestyle and planet for those to come.”

Meghana Narayan and Shauravi Malik, co-founders and co-CEOs of Wholsum Foods Pvt Ltd said, “Ahead of the International Year of Millets in 2023, we couldn’t have asked for anyone better than Anushka Sharma on board with us as we take millets to the world. The partnership is an important milestone as we build Wholsum Foods into a house of brands that makes food better for us and for the planet. “

Wholsum Foods’ flagship brand Slurrp Farm currently retails in India via www.slurrpfarm.com as well as through leading e-commerce and quick commerce platforms such as Amazon, Big Basket, First Cry, and Swiggy Instamart amongst others. Products are also available across leading modern trade stores in India and the UAE as well as online in the US and UK.

About Wholsum Foods and Slurrp Farm:

Wholsum Foods is the parent company of millet-based children’s food brand Slurrp Farm. Founded by two mums, Meghana Narayan and Shauravi Malik, Slurrp Farm was born in October 2016 to provide healthy, yummy, and natural food options for children. Both Meghana and Shauravi felt they were incredibly short of options that were both healthy and tasty to feed their own children. Upon realizing that parents of other young children felt exactly the same way, the duo decided to launch Slurrp Farm; a trusted brand to make things better and become a force for good. Following their hearts, they dug into recipes from their grandmothers’ kitchens and took ingredients from their own childhoods such as Millet, reinventing them and making them as tasty as can be. What started as an experiment in their own home kitchens has now evolved into a globally loved children’s food brand.

Meghana was an Associate Principal at McKinsey & Company in Delhi where she led the public health practice. She holds an MBA from Harvard Business School, a BA in Computation as a Rhodes Scholar from Oxford University + a BE in Computer Science Engineering from Bangalore University.

Shauravi has worked in the Consumer, Healthcare and Retail Advisory team at J.P. Morgan. She was an Investment Manager at Sir Richard Branson’s Group Holding entity at the Virgin Group in London. She holds a master’s degree in Economics from Cambridge University + BA in Economics from St. Stephen’s College, DU.

START PLANNING YOUR RETIREMENT FROM AN EARLY AGE