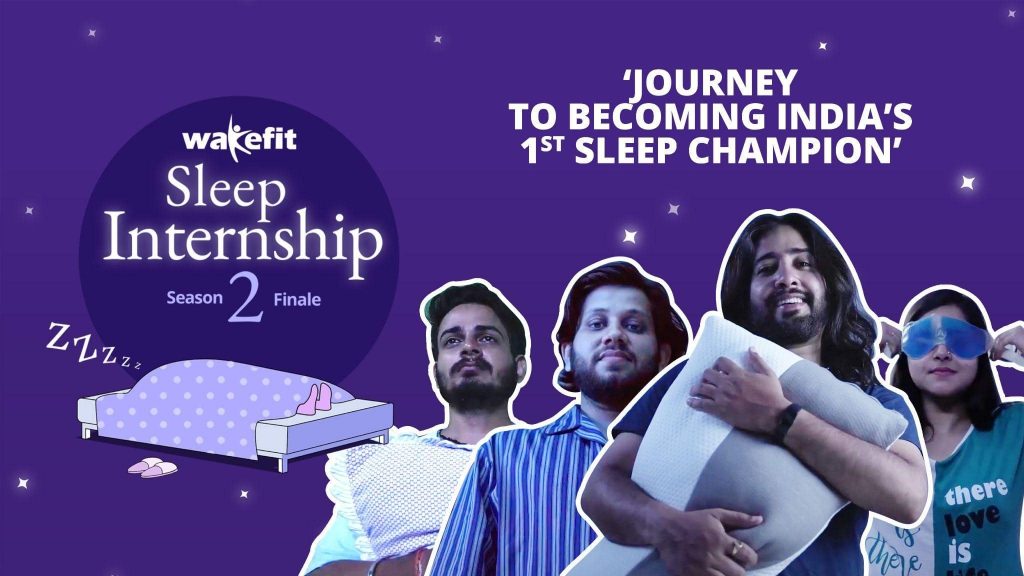 Wakefit.co, one of India’s largest D2C home and sleep solutions companies unveiled the winner of The Wakefit Sleep Internship Season 2 – Batch of 2021. 15 candidates from across the country were selected as sleep interns last year, to applaud their passion for sleep. While the 15 interns after having slept for 100 days have all received their stipend of INR 1 Lakh, Triparna Chakraborty from Kolkata, one of the finalists for the season, was crowned ‘India’s First Sleep Champion’. She took home a grand prize of INR 5 Lakhs. Entries for The Wakefit Sleep Internship Season 3 are now open and interested candidates can fill in their entries here. Set on a larger scale, the winner of Season 3 will get to take home a grand prize of up to INR 10 Lakhs.

After over 6000 hours of sleep among the interns throughout the Sleep Internship, 4 finalists were selected to compete against each other for one last time in a “live sleep-off” to bag the crown. The finalists, namely, Abadur Siddiqi (Kolkata), Kushagra Sharma (Bilaspur), Yogesh Bhatt (Dehradun), and Triparna Chakraborty (Kolkata) were monitored live on camera throughout their night’s sleep and were judged on parameters such as sleep duration, awake time, REM sleep, light sleep and deep sleep to determine their sleep efficiency score. Triparna Chakraborty, who hails from Kolkata – the city that loves its sleep, emerged as the clear winner with a sleep efficiency score of 95%, making her India’s First Ever Sleep Champion. The exciting finale was also captured live on camera and can be viewed here.

As a company that was born with the vision of democratising sleep for all Indians in 2016, The Wakefit Sleep Internship is a by-product of the vision itself. Through the internship, Wakefit.co aims to change the narrative ‘You snooze, you lose’ and educate Indians about the importance of quality sleep.

Speaking about this, Chaitanya Ramalingegowda, Director & Co-founder, Wakefit.co, said, “The Wakefit Sleep Internship’s primary agenda has always been to promote sleep health and change the narrative and myth that “sleep is an enemy of productivity” among other things. We received a rather overwhelming response from candidates across the country for Season 2 and this has encouraged us to up the ante with every upcoming season in order to keep the contestants on their toes. We are thrilled to open up registrations for the next season and encourage sleep enthusiasts from across the country to register, gear up and show their sleep prowess again.”

He also added, “Over the last two seasons, we have had numerous interns that have been a part of The Wakefit Sleep Internship and believe that the internship has made a positive impact on each of them, in different ways. As we progress through each season, we are one step closer to educating more and more Indians about the importance of quality sleep.”

The Wakefit Sleep Internship was one of the most viral campaigns since its launch in 2019. While Season 1 received close to 2 Lakh applications, Season 2 took the internet by storm and garnered an overwhelming response with 5.5 Lakh applicants from across the country. The company now invites people to register for Wakefit Sleep Internship Season 3 and compete for the title of India’s Sleep Champion. The interns will be selected through a rigorous process, and will be provided with a state-of-the-art Wakefit.co mattress and a sophisticated sleep tracker. The interns will also be counselled on ways to improve their sleep health through empowering sessions with sleep specialists, fitness professionals, nutritionists, wellness experts, etc.

Wakefit.co is a research and innovation-driven sleep and home solutions company established in March 2016. It was founded by Ankit Garg and Chaitanya Ramalingegowda, with a vision to become India’s most loved brand in the home and sleep solutions category. With a portfolio that previously included mattresses, pillows, bed frames, mattress protectors, comforters, neck pillows, and back cushions, Wakefit.co has now expanded to include home products such as study tables, bookshelves, shoe racks, TV units, bedside tables, coffee tables, dining tables, towels, wall decor, lighting, floor rugs, and more. It manufactures its products in-house at factories in Bengaluru, Jodhpur, and Delhi. It sells across the country through its own online portal and through other online marketplaces. Wakefit.co prides itself on its customer experience, with over 1 million customers serviced across six years. The company received Series A funding from marquee investor Sequoia Capital India, Series B funding from Verlinvest and Sequoia Capital India, and received Series C funding from US-based SIG, while existing investors Verlinvest and Sequoia Capital India also participated.