Kapoor Bros & Their Masti Side

Shahid Kapoor has revealed something on Instagram and it’s his wife Mira Rajput’s desire!

Through a peculiar post and an open invitation to all, the actor revealed that his wife has some different ideas about the kind of role he should take up.

Posting an Instagram story, Shahid Kapoor wrote that Mira wants him to do fun movies where the actor can show off his too-good-to-be-true dance moves on the silver screen. Committed to this cause and fulfilling his wife’s wish, he stated ‘typecast hero in need’ and asked people to send him stereotypical roles that’ll make Mira happy.

Have a look at his plead: 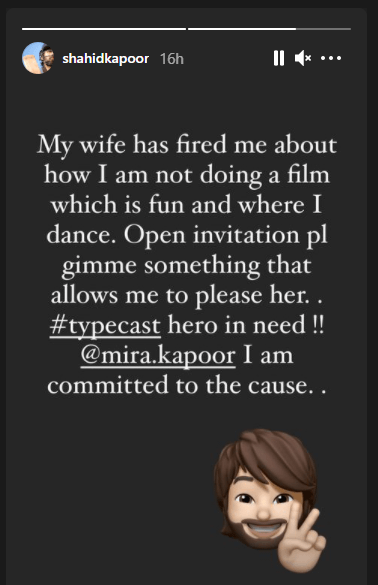 Attending dance classes for the horror comedy film, Ishaan and Siddhant’s friendship has already become famous over the Internet. Sharing a glimpse of their bond, Siddhant posted a picture with his co-actor on the gram where the duo are monkeying around in their class.

Wearing joggers, tees and pairing it with sporty shoes, Ishaan has wrapped his legs around Siddhant hanging from the monkey bar. Keeping up with his caption game, Siddhant wrote, “Call us! 📞 we’re just hanging around 👻 @ishaankhatter @excelmovies @gurmmeetsingh @katrinakaif #PhoneBhoot”.

A Note For Kamala Harris From Priyanka

Upcoming Releases From Vicky And Janhvi