Written and created by Pushkar and Gayatri, Suzhal – The Vortex features Kathir, Aishwarya Rajesh, Sriya Reddy along with Radhakrishnan Parthiban. The series will stream in India and across 240 countries and territories from 17th June

Produced by Wallwatcher Films and directed by Bramma and Anucharan.M, Suzhal – The Vortex is Prime Video’s first Tamil Original series to premiere across languages including Hindi, Kannada, Malayalam, Telugu, and English along with foreign languages like French, German, Italian, Japanese, Polish, Portuguese, Castilian Spanish, Latin Spanish, Arabic and Turkish. The series will also be available with subtitles in additional foreign languages. 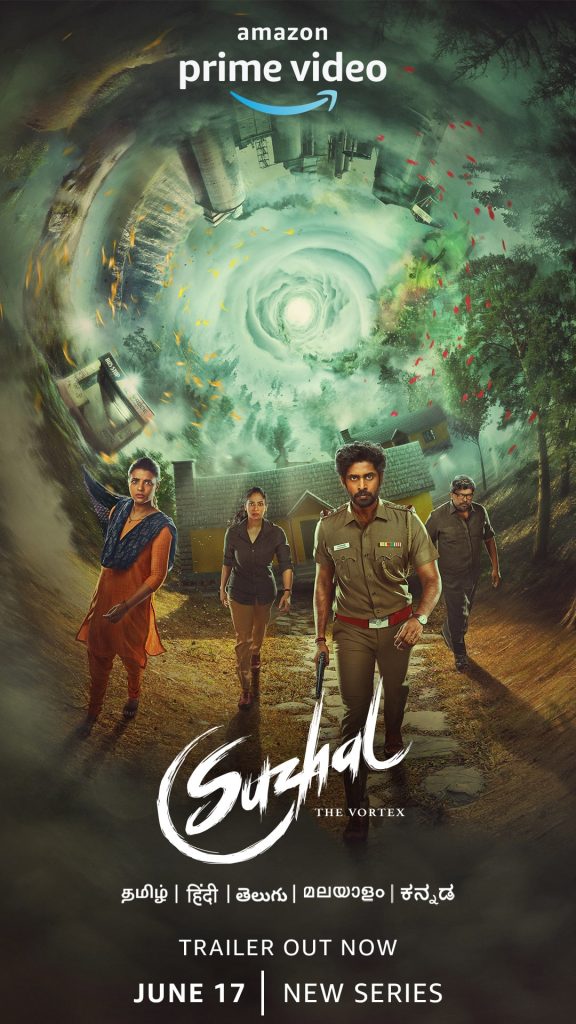 In what looks like a peek into a nerve-wracking drama, Prime Video today unveiled the trailer of its first long-form scripted original series in Tamil, a thriller titled Suzhal – The Vortex. Written and created by the dynamic duo Pushkar and Gayatri and directed by Bramma and Anucharan. M, the 8-episode investigative drama promises to be an intriguing and thrilling ride through events that wreak havoc in a small industrial town following the disappearance of a schoolgirl. Headlined by a prolific ensemble of actors like Kathir, Aishwarya Rajesh, Sriya Reddy along with Radhakrishnan Parthiban, the Tamil original series, Suzhal – The Vortex will premiere across multiple Indian languages including Hindi, Kannada, Malayalam, Telugu, and English, as well as foreign languages like French, German, Italian, Japanese, Polish, Portuguese, Castilian Spanish, Latin Spanish, Arabic, and Turkish. The series will also be available with subtitles in a number of foreign languages including Chinese, Czech, Danish, Dutch, Filipino, Finnish, Greek, Hebrew, Hungarian, Indonesian, Korean, Malay, Norwegian Bokm, Romanian, Russian, Swedish, Thai, Ukranian and Vietnamese. Prime members in India and across 240 countries and territories worldwide will be able to watch Suzhal – The Vortex starting 17th June, 2022.

The Vortex begins with the disappearance of a young girl from a small town in Tamil Nadu. What begins as a mere missing-person investigative drama, soon spirals into a heart-thumping thriller with a twist at every turn and a secret tumbling out of every corner of the story, threatening to tear apart the town and its delicate social fabric. Set against the backdrop of an annual cultural festival, the series spins a masterful web of lies, deceit and suspicious characters with hidden agendas and a rollercoaster of emotions which will keep viewers at the edge of their seats. Replete with a fast-paced screenplay and some stupendous performances, the series promises to immerse audiences into a rabbit hole of mysteries and leave them eager for more.

Bramma, who has directed the first four episodes of the series, said “It is heart-warming to finally have our labour of love reach the audiences. What we have here are some superlative performances and a gripping narrative that will keep everyone guessing through every episode. Suzhal – The Vortex is an effort in differentiated storytelling that’s sure to strike a chord on various levels. With one dark mystery lying at core, the series manoeuvres through a rollercoaster of situations, beliefs and secrets that makes the characters, and the viewers constantly oscillate between what’s true and what’s not. I am delighted to collaborate with Pushkar and Gayatri and share their vision of offering a spectacular viewing experience. They have witnessed immense success for their work so far and we hope to replicate the same with Suzhal – The Vortex. We are really looking forward to the global premiere of the series on Prime Video and reactions to pour in from 240 countries and territories worldwide.”
Anucharan. M, who has directed episodes 5-8 of the series said “When I was approached with Suzhal – The Vortex, I was instantly taken in by the pace and complexity of the narrative. The sequence of events has been created in a way that will leave the audience glued onto their screens, leaving them intrigued at every instance. I am thankful for the faith Pushkar and Gayatri had in me in helming this cracker of a thriller and the entire team has put in humongous efforts to bring to life this story that’s a standout in the thriller genre. We are delighted that Suzhal – The Vortex will be presented across multiple Indian and foreign languages on Prime Video. This enables us to take the story to a huge audience at once and keep them entertained and engaged.” 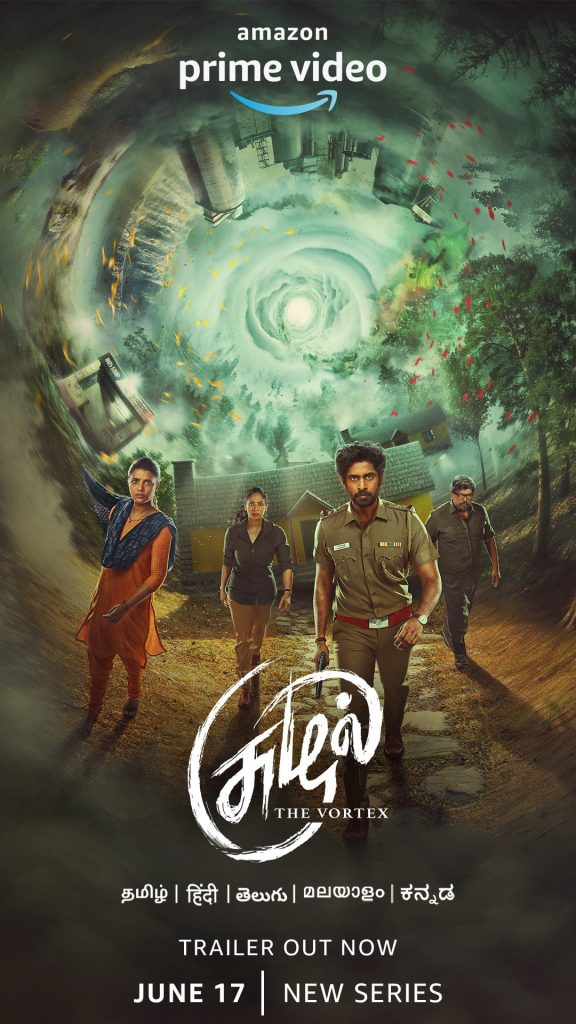 Kathir, who plays sub-inspector Sakkarai in the series said “It feels incredible to be a part of Suzhal – The Vortex and bring to you all a spectacular story that is sure to keep you entertained and at the edge of your seats throughout. While a dark mystery runs at the core, the series keeps steering through sharp twists and turns at every instance, not letting the viewers take sides. As a team, we have put in a lot of effort in bringing to life this authentic, riveting story. I am looking forward to the global premiere of Suzhal – The Vortex on Prime Video across 240 countries and territories.”
Aishwarya Rajesh who is also making her digital debut said, “As an actor, there are stories you aspire to and feel humbled to be a part of. Suzhal – The Vortex was one such experience for me. It has been truly enriching to work with such a talented team and an amazing ensemble of actors. While the series reflects on a small-town case, the story is peppered with elements that shall appeal to an audience worldwide and keep them glued to their screens. This has been one exciting journey and I am delighted that we have been able to deliver a story that is raw, credible, and differentiated. Suzhal – The Vortex will always be special to me not only because it’s an incredible show but also because it’s the first time I’m featuring in a digital series!”

Sriya Reddy who essays the character of Inspector Regina said “Suzhal – The Vortex offers a whirlpool of emotions, thrill, drama, and mystery, all at once that is sure to leave audiences awed and intrigued. Suzhal is refreshing and unique in its intent to go beyond the cliches and formulaic storytelling in the thriller genre. I am thankful to the creators and directors for reposing faith in me to be a part of such a spectacular series and I hope the audience has as much fun watching it as we had while filming this one. One thing I can absolutely promise is that this series will keep everyone guessing till the very last moment. So, get ready for some really good nail-biting, edge-of-the-seat drama!”
Radhakrishnan Parthiban, who plays a pivotal character in the series said, “We have lived and breathed with this story for a long time, and it really feels great to finally let the audiences be a part of a remarkable experience. Pushkar and Gayatri along with the directors Bramma and Anucharan. M have done a tremendous job of delivering a story that will remain etched in the viewers’ minds long after the credits roll. After having spent 40 years in the industry, making my digital debut with a series such as this, with such an incredible set of co-stars and creators is absolutely invigorating. I am looking forward to the global premiere of the series across multiple languages on Amazon Prime Video. Given the universal nature of the story’s core, I am certain it will resonate with audiences across cultures and regions!”

IT’S GIN-O- CLOCK!Celebrate WORLD GIN DAY with some of the exciting cocktails served in Mumbai.