Shruti Samant have recently made an original song called SHATTER on Mental Health Awareness that highlights the importance of Support.

PFB the link of the song with video and lyrics. Plz don’t go by the video which is just for understanding. 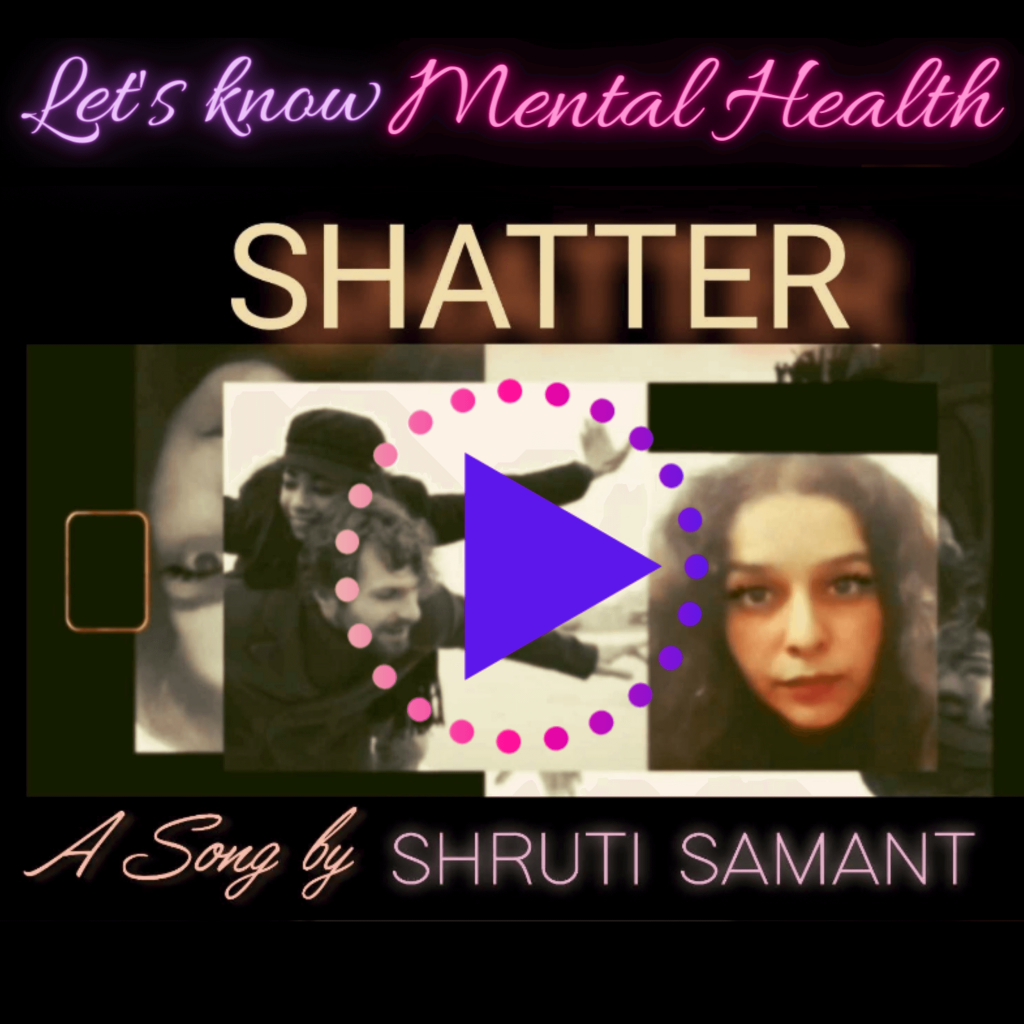 This song is also available on Apple Music/iTunes and soon will be available on all major music streaming platforms including Spotify. Plz search by Artist Shruti Samant and Song called Shatter

When you’re alone I come to you

You don’t want me to

And these webs I spin for you

You go deeper into

(This verse represents the ‘I’ as mental distraught in the form of Anxiety, self doubt, that keeps following us. The more we try to heed anxiety, the more it traps us into.)

Running in the deep end

Waiting for a kind hand

To hold me tell me what to do

Would you plz be my friend

I will do what I can

(This sub-verse represents the ‘I’ as the person undergoing mental distraught, and explains the extreme Vulnerability that they feel. Even when unspoken, through gestures, expressions of feelings – we’re seeking and asking for Support, to simply understand us, be a friend. Coz we already undervalue enough and don’t want to be alone. Not be isolated/mocked. We require Inclusion and Support in its true sense.)

And break it loose

Will make you you

(Support trying to explain the person in mental distraught, to Shatter the reins of limitations we often put ourselves in, encourage to be like the flowing wind and that the person is not alone. Its one step. To remind us of our forgotten value.

Who the person used to be. Playful,  Innocent.)

Give me your hand

I may seem alright

Coz I won’t tell you

Not the same as you

That’s enough to be

(The person in mental distraught asking to be understood, to be felt. Even if they seem alright, doesn’t necessarily mean they are. They might not tell how trapped they feel. Might not have the courage. And they know they’re Different. And it’s ohk.)

Just know its not true

You think its because of you

Coz I want you to

(Tendency of a vulnerable person to self doubt, blame themselves is high. Especially if isolated, ridiculed. With support, they can be assured their value is so much more.)

On a merry go round that goes round and round?

Be it a party or a lounge

(The above verse represents OCD in a subtly)

And then be just so quiet

Feel so empty not even cry?

(The above verse represents Bipolar disorder and Depression subtly)

So, don’t you turn away no more

Accept me as who I am

Trying too hard to blend

(Since its quite common to ignore or avoid a person in mental distraught. In this sub verse, the person is asking for Support and to be Accepted. They’re trying to blend in and not be discriminated against because they might be different than usual. This highlights on being Accepted.)

Its not that easy I know

Deeper than a plateau

Just try to be a friend

(This sub verse explains that its not that easy to understand because these are not superficial symptoms but is much more deep. But the least and simplest step to Support is just to be a friend.)

And break it loose

With someone, can’t be found

(This chorus highlights that its important to be around, support and not leave alone a person in mental distraught who are often not able to find themselves due to feeling down. Try to boost their morale by Support.)

They may seem alright

Coz they won’t tell you

Not the same as you

There’s no need to be

(Most of the Genius and Celebrities (in different fields) have suffered from Mental Health conditions. But them having a mental condition isn’t a fad.

This sub chorus highlights that its alright to be Different. The people who have a mental condition are often labeled Weird or Crazy simply because they’re slightly different from usual. But they’re not weird.

Maybe they’re genius or great at something because they’re different or maybe they’re simply themselves. And that’s alright. There’s no need to pressurize them to be any less weird or crazy (or even label as such). They’re who they’re. So, simply Accept them. Support them.)

So, even if it’s few simple steps that provide tremendous Support – but its the most important aspect of Mental Health Awareness.