Only a few cars can claim to have stood the test of time and one of them has to be the G63 AMG. The G-Class aka the G-Wagen is an icon that needs no introduction but what is worth revisiting is its illustrious past and how it has become one of the most desirable SUVs in the world. Today we are taking this beast for a spin and getting to know the most famous Mercedes a bit better. 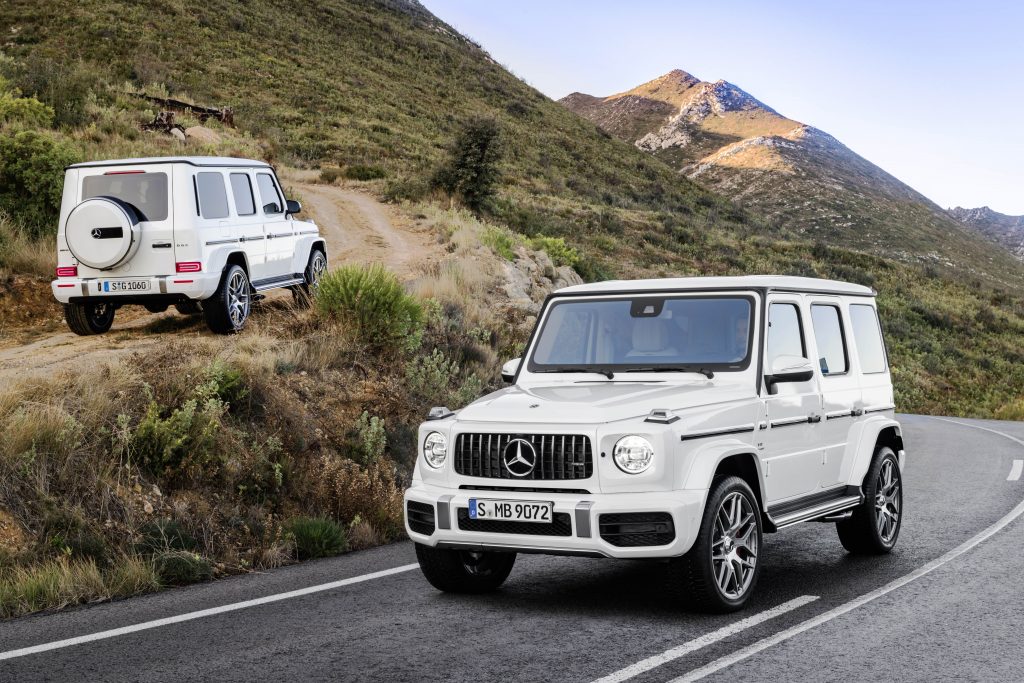 When the G-Class love-affair started

The origins of the G-Class was not as luxurious as the one we see today as in the 1970’s it was first made to be a tough no-nonsense off-roader. For the time, the G-Class proved to be a tough workhorse with an ability to go through nearly any kind of terrain. Thus it was popular and continued production for many decades but it was in 1999 that AMG (Mercedes performance division) took the G-Class and turned into the star that you see today. A simple utilitarian workhorse that slipped into fancier clothes and had a massive engine transplant; that resulted in the G55 AMG- a car loved by film stars and the wealthy.

Our love affair with the G-Class AMG has gone on from that time but in 2018, Mercedes launched the new one in India and that went on to be one of its most successful cars in its high-end performance portfolio. Celebrities, wealthy businessmen and the jet set; all formed an orderly queue for it and one glance explains why. 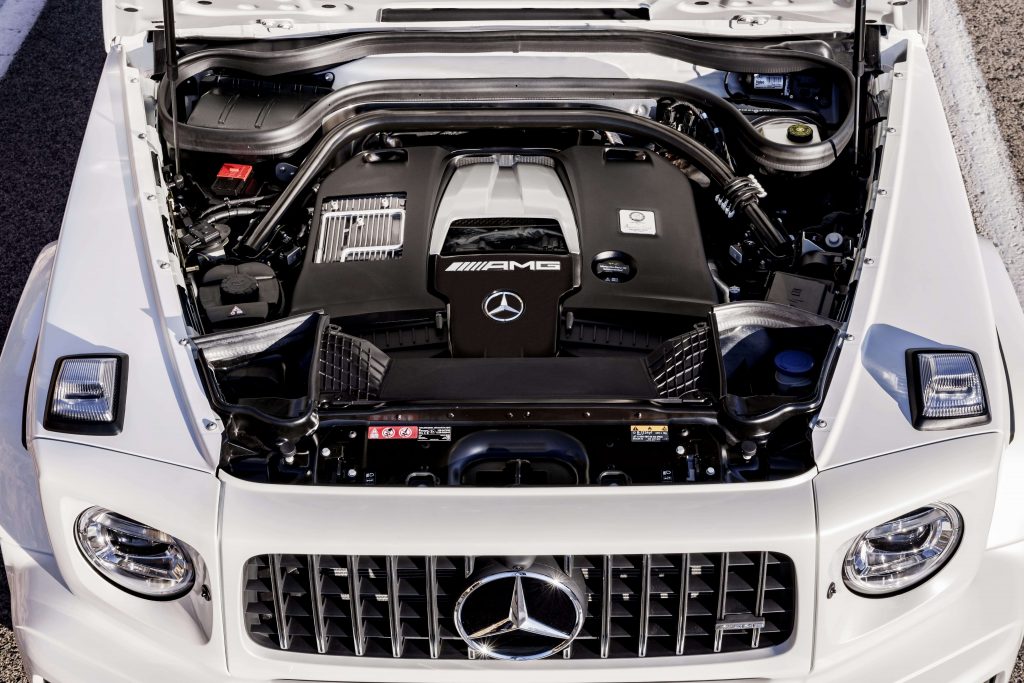 The new G63 looks unlike anything else and knocks it out of the park for sheer automotive presence. There are SUVs and then there is the G63 as everywhere you go in it; jaws drop and camera phones are whipped out in an instant. Stare at it lovingly and you will some classic G-Class touches which have been carried on from its predecessors. The exposed door hinges, side exhausts , boxy proportions and those unique direction indicators- all scream ‘G-Wagen’. It is clear that Mercedes did not alienate its core audience which loves the iconic shape hence it is largely left undisturbed.

Yet it is all new and looks meaner plus it’s also slightly bigger now. The massive AMG grille has grown too while the LED headlamps have a round glow which gives it a piercing stare. Move your gaze to the rear and the classic spare wheel mounted at the back is very much there but there are new LED tail-lamps and subtle changes here too!

The G63 that we drove was the special ‘Edition 1’ and that gets massive 21 inch wheels with red accents plus special interior touches that we will talk about later. Simply put the new G63 AMG is a perfect mix of the old and new with added swagger sprinkled generously on top. Well done Mercedes! 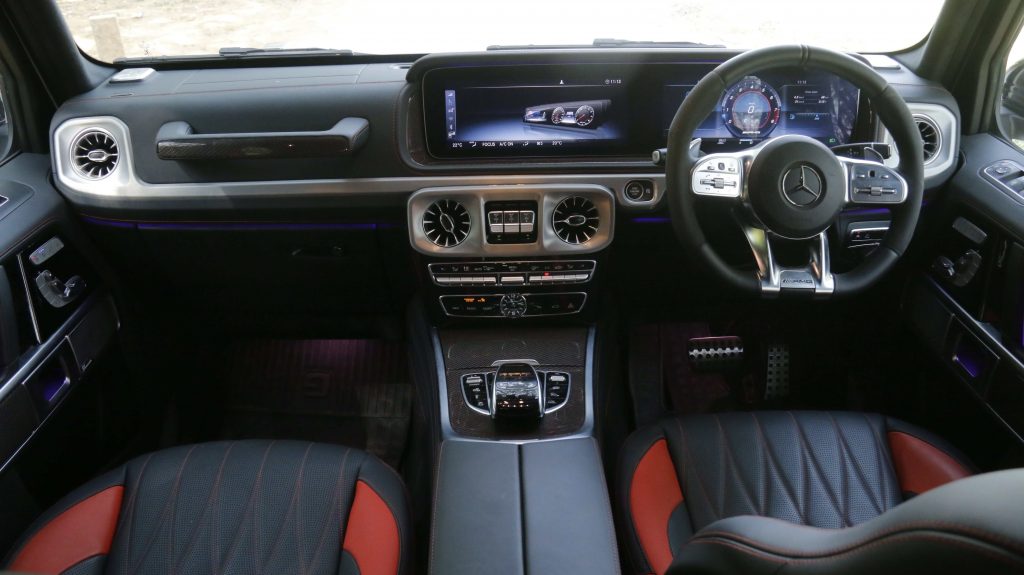 The act of getting in requires more theatre too! You grab the meaty door handles and the sound of opening/closing the door is similar to operating a vault with that same distinct solid ‘thud’. Step inside and here again you feel like sitting in a bank vault- a luxurious one at that. Everywhere you look, sumptuous leather with contrast red stitching plus carbon fibre is carefully draped all over while both the design and quality is faultless. This is where the new G63 scores as the previous one was feeling old and showing its age here. The new one brings all the latest Merc gadgetry on-board and looks the part. Your attention will be dominated by the two massive 12.3 inch displays which occupy the maximum real estate. We loved the display quality and the crispness while even the vast reservoir of information is easily accessible and you do not need to be a rocket scientist to decipher them!

A said earlier the G63 is filled to the brim with features and that is something you might as well expect given the eye-popping sticker price. From the vast equipment list with every safety feature on board, you will be cocooned safely inside this beast plus while driving you can choose to play your favourite tunes via the frankly extraordinary 15-speaker Burmester Audio though we did not bother doing that as we instead preferred to listen to that V8…

To drive the G63 AMG is an event which is to be savoured upon. The driving position is unique as you are sat high up with an impossibly raked windscreen which gives you a unique view out. Push the starter button and the bi-turbo petrol V8 jumps into life with a theatrical flourish. The G63 is loud and the side exhausts are the reason as when provoked they belt out the best V8 music out there. It is near impossible not to fall prey to the lure of the 585 horses. Performance is insane and you are pushed into the horizon with speeds which is frankly impossible for such a big SUV. The G63 goes from 0-100 kmph in under 5 seconds while breaking the speed limit is simply too easy so you have to be careful!

However not just the performance as the way the G63 enters a corner is simply unbelievable. Unlike the earlier G63, this one handles and feels stable when you hustle it. The steering feels direct and gives you enough control too! Yet despite the impressive on-road performance, off-road it feels indestructible with a proper off-road system courtesy three differential locks on the dash!

We could go on and on regarding how much of a heady cocktail the new G63 AMG is. Simply put it might be the most desirable and coolest SUV on sale right now. The way it combines the past with the present effortlessly is laudable and even its outrageous Rs 2.3 cr price does little to dent its appeal. If you have the money, then there is really nothing else like it out there!