Kim Retrogrades In The Evolution Process

According to the science, in the next 100-200 years, human beings will no longer need their toes to walk. As the scientists are trying to prove the process of evolution, Kim Kardashian has already seen to adapt it but only in backward direction. Check it out here:

Kylie’s favorite is the nude bottle, I think mine is the pink! She’s been wearing my perfumes forever so this collab is extra special because I know how much she loves the process. Finding her perfect scent was impossible so we narrowed it down to her three favorites! Kkwfragrance.com Aug 23rd.

Couldn’t see it? Well zoom in the picture and you will find it. The ‘Keeping Up With The Kardashians’ beauty is being accused of a photoshopping blunder as the new promo pic of Kkwfragrance, the latest fragrance collaboration of Kim and Kylie Jenner, seems to show Kim’s foot with an extra toe.

In the picture, both Kim and Kylie are wearing one-legged latex bodysuits flaunting their curves. Both are carrying lip-shaped fragrance bottles, which come in three different versions: red, pink and nude lips. Kim and Kylie are looking ravishing in the picture except Kim’s left foot which is in a clear flip flop heel and she appears to have a sixth pinky toe.

Fans spotted the mistake as soon the post was made and started leaving some hilarious comments on it. 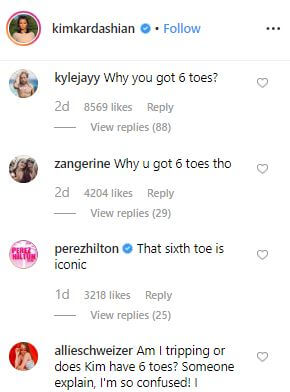 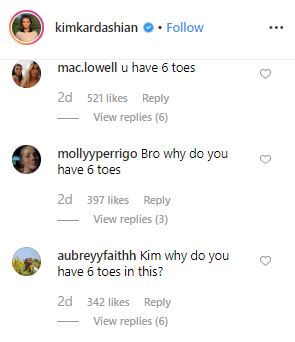 A lot of people were baffled, noticing the sixth toe, wondering if Kim really did have an extra toe or it is just a photoshop failure. By pulling out old pictures of Kim, her fans finally rested that she also has only five toes.

Confirming that the Kardashians are still from our species only.

Face off For A Mission: Netflix Series Ft. New Duo Of B’town!