Diamantaire from Surat to light up 750 Homes of Heroes of India’s 75 Years’ Journey with Free Rooftop Solar electricity.

SRK Knowledge Foundation (SRKKF), the community welfare arm of Shree Ramkrishna Exports Pvt. Ltd (SRK), a leader in the world of diamonds, announced at an Independence Day event held on Monday that they would install residential solar rooftop at the homes of 750 martyred soldiers and unsung heroes across India. 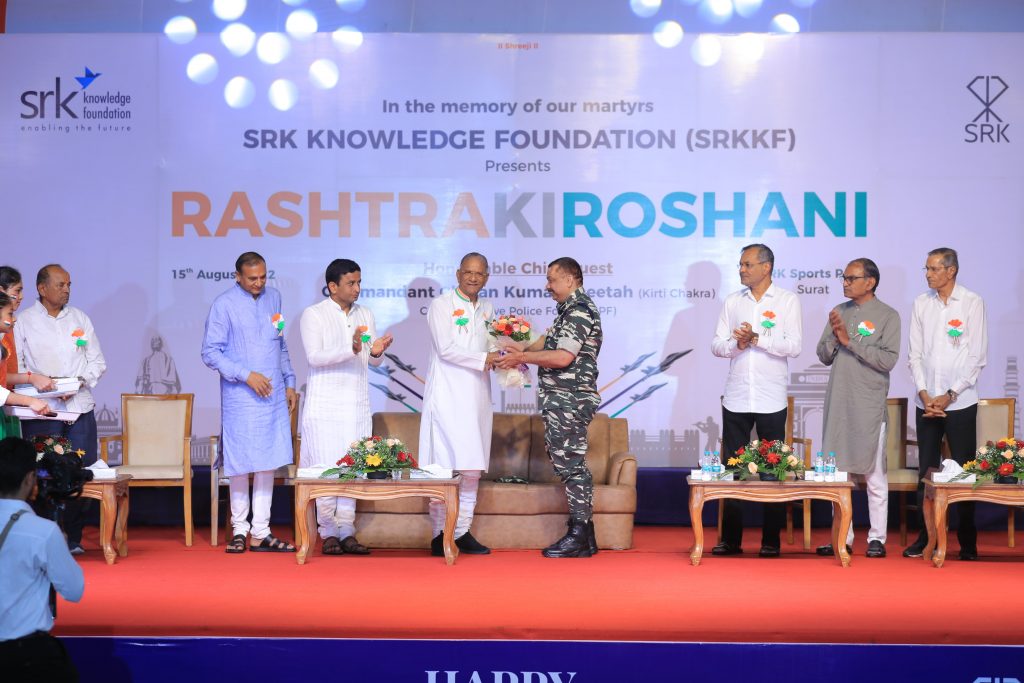 Inspired by Prime Minister Narendra Modi’s initiative of celebrating 75 years of India’s glory with the ‘Azadi ka Amrit Mahotsav’ campaign, SRKKF, during ‘Rashtra ki Roshni’, pledged to continue helping and empowering the affected families of unsung heroes and committed to the installation of residential solar rooftop at their homes. The mentioned initiative is said to impact 3000+ lives while addressing the needs of energy day & night. Once complete, this would be a pioneering initiative by a community welfare organisation.

The 750 KW rooftop solar systems will be used to power 750 homes. With this, the residents will be able to save Rs. 2000 per month over 25 years. SRKKF is accelerating progress towards the Sustainable Development Goals (SDGs), and this initiative is a small step towards a green future among the various other initiatives.

In March this year, Govindkaka had announced to make Dudhala in Amreli district of Gujarat a green village by installing solar panels at all the homes. Earlier in 2016 at Nadabet, SRKKF had organised an event named “Hum Chale toh Hindustan Chale” to felicitate our brave army jawans.

Govindkaka remarked “Our unsung heroes are doing so much for us. We should take inspiration from them to always contribute to the development and growth of our nation. As responsible citizens of India, we, the SRK Family, thought of what should we do for our unsung heroes which could benefit them for a lifetime and came up with the idea of providing solar energy to their homes.”

Driven by Govindkaka’s far-sighted vision and motivated by his entrepreneurial spirit, SRK is well known for crafting diamonds at its world-class green facilities, and for sustainability practices and boasts several achievements and recognition in its growth history in the domestic, as well as international markets.

Till date, over 3,008,160 people have received financial support for various educational scholarships and medical exigencies. Govindkaka instituted the ‘Santokbaa Humanitarian Award’ in 2006 in the fond memory and honour of his late mother, Smt. Santokbaa. The prestigious award till date has been conferred on 13 eminent personalities from distinctive backgrounds.

For six decades, Shree Ramkrishna Exports Pvt. Ltd has been the epitome of sophisticated simplicity, transparency and ethics in the world of diamonds. Its professional ideals have launched them on this journey of forever setting the highest benchmarks in industry standards and customer service. Being the most technologically advanced diamond-crafter in the world, SRK has embraced science and technology to further its quest to blend quality and scale.

SRK has been rapidly growing and, as of July 2022, the firm is a USD 1.8-billion family-run enterprise with 6,000 members in the entire group. It has two crafting facilities—SRK Empire and SRK House in Surat—which are USGBC-Platinum certified green buildings. It is the most compliant company in the industry and holds the highest number of ISO certifications.

Shree Ramkrishna Knowledge Foundation (SRKKF) is committed to creating a better future for humankind by developing effective and socially responsible individuals and organisations. With its continuous and responsible engagement, it keeps expanding its efforts to realize a sustainable future for communities.

SRKKF makes a difference by emphasising the spread of quality education, healthcare and hygiene, skill development, community development, and sustainable livelihood opportunities. These five pillars of social advancement also represent key indicators of the Human Development Index.
In addition to these, SRKKF is sensitive to the greater needs of the nation and supports projects for the conservation of natural resources and disaster relief and rehabilitation, among others.