The evening of the 64th Vimal Filmfare awards was full of glamour with many films and stars taking the Filmfare award home. Amongst the winners, Ranbir Kapoor won the coveted trophy for ‘Best Actor’ for Sanju while Alia Bhatt walked away with the ‘Best Actress Award’ for Raazi.

Although this injustice of Deepika Padukone losing out the award to Alia didn’t go down well with her humongous fan-following, many went ahead to slam the Filmfare for their alleged prejudice against Deepika. 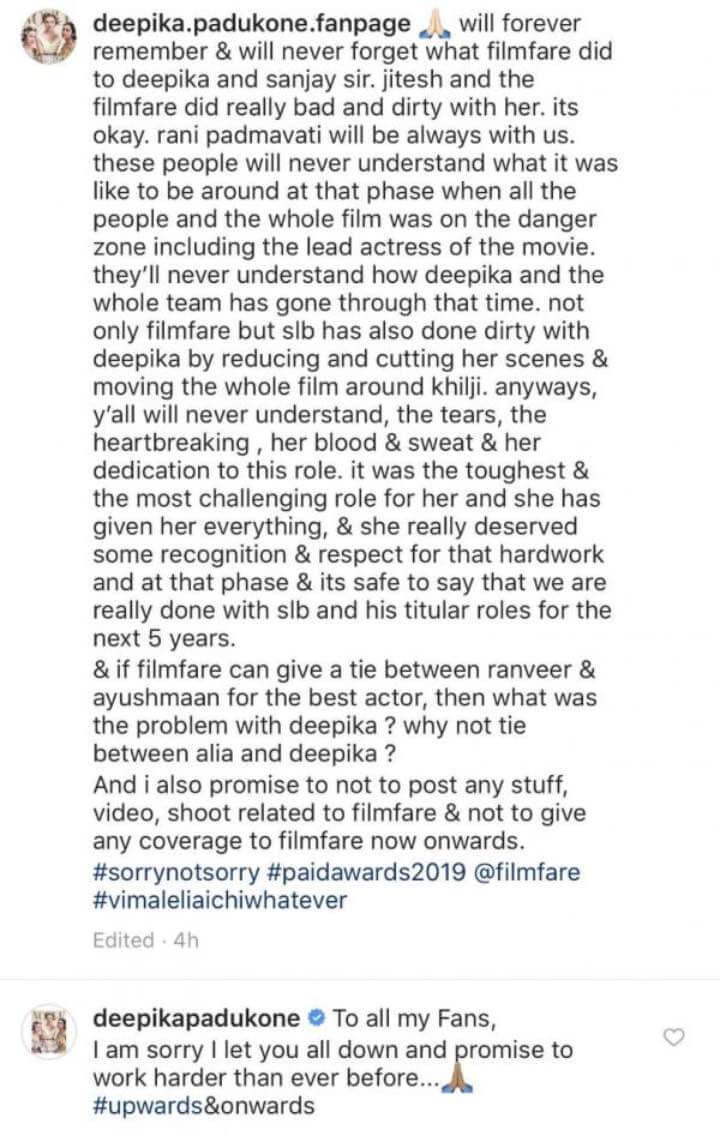 One of the disappointed fan clubs went on a long rant, bashing and boycotting Filmfare. The comment pointed out how it is unfair that Deepika didn’t win the Best Actor award even after delivering a phenomenal performance in Padmaavat. Just like Ayushmann Khurana and Ranveer Singh shared the Critics’ award for Best Actor (male), the fans wanted Alia and Deepika to have shared the award too.

Post this uproar, Deepika took the matter in her own hands and replied saying that she was sorry to let her fans down and she also promised to work even harder in the future, she wrote, ‘To all my Fans, I am sorry I let you all own and promise to work harder than ever before… #upwards&onwards.’ That’s the star we all love, she has always been generous, big-hearted and loving towards her fans.

The actress was awarded the Best Actress Award for her role in Padmaavat at Zee Cine Awards earlier. While on the work-front, Deepika has already started the shooting of Meghan Gulzar’s film Chhapaak and also shared her first look from the biopic. By the look of it, we are completely assured that the actress is up for many more awards.

Kartik And Sara Are Too Cute To Handle