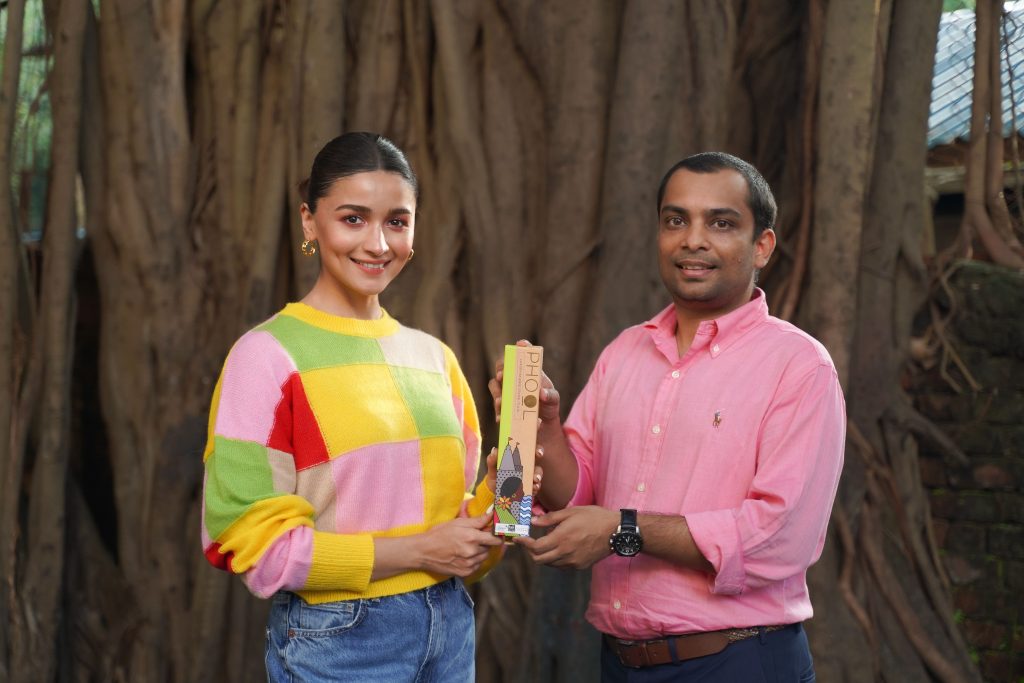 Alia Bhatt has invested in IIT Kanpur-backed startup Phool.co, which has pioneered the flowercycling technologies to upcycle cellulose waste and specializes in manufacturing charcoal-free incense and other wellness products.

Phool.co is India’s first wellness brand to have both Fair for Life- Fairtrade and Ecocert Organic & Natural certifications.

With Deep-tech research, the startup has successfully developed a commercially viable alternative to Animal leather called “Fleather”
Phool.co, an IIT Kanpur-backed D2C wellness startup, today announced that Alia Bhatt is now an investor in the company.
Founded by engineering graduate Ankit Agarwal in July 2017, Phool.co is an innovative startup focused on the circular economy which converts floral waste into Charcoal free Luxury incense products and other wellness products. The startup is also India’s first wellness brand to have Fair for Life- Fairtrade and Ecocert Organic & Natural certifications. With deep-tech research, the startup has also developed“Fleather” leveraging their flowercycling technology. Fleather is a viable alternative to Animal leather which was recently awarded PETA’s best innovation in the Vegan World.
Phool.co has rapidly expanded its operations and has consistently achieved 130% YoY growth for the past two years. Phool.co vision is backed by strong RnD efforts and is based on sustainable development goals focused on creating a circular economy, promoting sustainable consumption, and bringing dignified livelihoods.

Speaking on the latest investment, Alia Bhatt, who is known for her environmental initiatives, said, “Phool incense really stands out for its fine natural fragrances and amazing packaging. I admire the founder’s vision of making incense and bio-leather from recycled flowers that contribute to keeping our rivers clean, creating a humane alternative to leather and providing employment to women in India’s heartland. I’m proud that these products are created in India and wowing the world and I’m thrilled to join the investors who are backing the company.”
Earlier this year, Alia Bhatt had also invested in Nykaa, the omnichannel lifestyle retailer stating the three reasons she chose the company were its Indian roots, its global scale and that it was founded by a woman.

IIT Kanpur had invested in and nurtured the company, while it was at the idea stage. Speaking on the latest development, Dr. Abhay Karandikar, Director IIT Kanpur said “IIT Kanpur is proud to be a partner of PHOOL. I am glad that we could help the company technologically but at the same time, I must acknowledge that PHOOL.co brought a lot of visibility to our incubator and the subsequent stupendous success of SIIC is at least in part due to the success of PHOOL”

Ankit Agarwal, Founder Phool.cosaid ,“At Phool.co we aim to drive systemic change through innovation. Alia’s investment is a validation of our efforts and firmly sets us on a path to build a global success story from a tier 3 city. The investment and support will help us expand our footprint globally and also step up the pace of RnD. I can proudly say, Phool.co is a business built, led and now even invested in by women.”
Speaking on the latest development, Manoj Kumar, Founding Partner, Social Alpha (FISE) said, “Ankit has truly demonstrated how passionate entrepreneurs can solve some of our most complex problems with their disruptive innovations. The team has the rare combination of empathy, audacious goals, extraordinary resilience and flawless execution to build and scale a sustainable business model. Phool.co will only grow bigger with time” 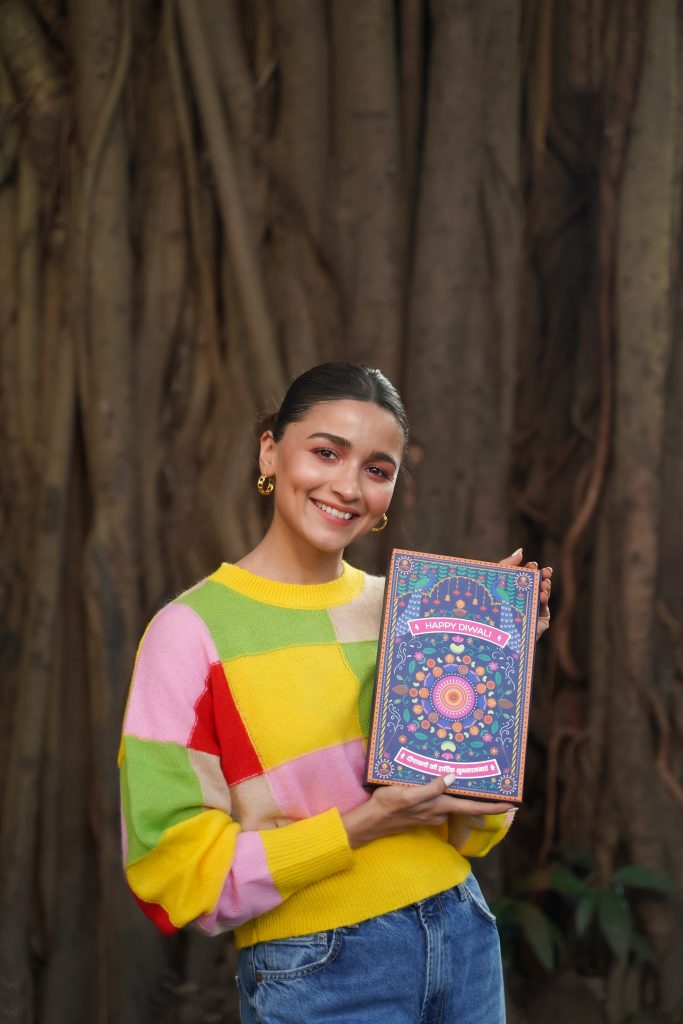 Speaking on the latest development, Padmaja Ruparel, Founding Partner, IAN Fund said, “Innovative solutions for the sustainable development of the community is the need of the hour. Phool.co‘s circular economy model brings triple bottom benefits of environmental, social, and financial sustainability. Ankit is a passionate entrepreneur focused on a large market and value creation for both customers and his team.”
For its endeavors to make innovative and sustainable products, Phool.co has received several international recognitions including the prestigious United Nations Young Leaders Award for Sustainable Development Goals, United Nations Momentum of Change Award at COP, Asia Sustainability Award Hong Kong, Alquity Transforming Lives Awards, London and Breaking the Wall of Science, Berlin
Earlier, Phool.co had raised US $ 2 Million in a seed round from IAN Fund, Social Alpha (FISE) and Draper Richards Kaplan Foundation (San Francisco), and IIT Kanpur.

The IAN Fund, an INR 375 crore fund, is a uniquely differentiated seed/early stage Fund which aims to transform India’s entrepreneurial landscape. The fund invests in innovative companies in sectors including healthcare and medical devices, VR, AI, software as a service, marketplaces, fin-tech, big data, artificial intelligence, agritech and hardware. The Fund leverages and builds upon the strengths and success of IAN, the world’s largest angel investor group, to breed and grow innovative companies.

The fund has Institutional investors like SIDBI’s Fund of Funds for Startups, BIRAC’s ACE Fund, Kerala Startup Mission, IIFL, Wadhwani Foundation, Max Group, Hyundai along with marquee individuals like Kris Gopalakrishnan, Sunil Munjal, RajanAnandan, Kanwal Rekhi, Vikram Gandhi, Jerry Rao amongst many others. This is the first in a series of Funds so that over the next 10 years, the IAN Platform would invest Rs 5000 Cr in ~500 companies, making it the single largest platform for early stage investing.

Social Alpha’s mission is to drive economic growth, social justice and climate action through the power of entrepreneurship and market-creating innovations. Social Alpha is focused on catalysing entrepreneurship for impact and provides critical technology and business incubation support to the mission driven founders through its product innovation labs and venture acceleration framework. Since its inception in 2016, Social Alpha has nurtured 150+ start-ups, making 35+ seed investments and 3 exits.

About IIT Kanpur & its ecosystem for Startups:

IIT Kanpur’s TBI, Foundation for Innovation in Research, Science and Technology (FIRST), is one of the best academic TBIs in the country. It is primarily engaged in hardware-based product development, a rare trait amongst the incubators of India.

Significance of Public-Private Partnerships and NGO’s in building a robust critical healthcare infrastructure, in the post COVID era

Making its Mark in the Live Kitchen Segment, Fusion Factory is Here to Win Hearts with its 'Tasty Twist'