Aishwarya Rai was inactive on Instagram for quite some time. She made her first appearance on Instagram last year, and the actress was quite active sharing her red carpet looks and family photographs with her fans. Her last post was made in May this year, wishing her mom Vrinda Rai on her birthday, after which the actress disappeared.

A post shared by AishwaryaRaiBachchan (@aishwaryaraibachchan_arb) on May 22, 2019 at 8:19pm PDT

After almost two months, Aishwarya took it to her Instagram today to share a picture of her husband, Abhishek Bachchan. In the post, Junior Bachchan is seen cheering his Pro-Kabaddi team ‘The Jaipur Pink Panther’. Photo is taken at the Gachibowli Indoor Stadium, Hyderabad where the Panther squad won against ‘U Mumba team’, on Monday.

A post shared by AishwaryaRaiBachchan (@aishwaryaraibachchan_arb) on Jul 22, 2019 at 9:43pm PDT

Abhishek called Aishwarya as the lucky charm on her recent post. 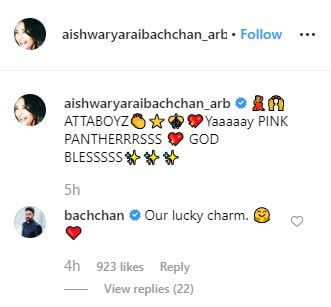 Aishwarya, Abhishek, and Aaradhya were recently in the US for a vacation. They met Rishi Kapoor and his wife Neetu Singh in New York, where the veteran actor is receiving treatment for cancer.

Former Miss World, is rumored to be seen in Mani Ratnam’s historical Tamil movie, called ‘Ponniyin Selvan’. The movie is based on Tamil classic of the same name and tells the story of Arulmozhivarman, one of the kings of the Chola dynasty during the 10 and 11 centuries.