When Karan Johar announced the sequel of his 2008 ‘Dostana’ movie, which showed the love chemistry of our own Desi Girl, Priyanka Chopra with John Abraham and Abhishek Bachchan, all eyes were set on the new star cast. Dharma Production even shared a small clip before the announcement of ‘Dostana 2’ with the typical beat of ‘Maa Da Ladla’ song, asking the viewers to guess the upcoming movie.

Later, the star cast for ‘Dostana 2’ was announced and we saw our own charming Kartik Aaryan and Janhvi Kapoor as the leads with a suitable boy. Writing, “Taking the iconic franchise forward!🔥

@karanjohar @apoorva1972 .”Dharma Production posted a small clip by keeping the identity of the ‘Suitable boy’ a mystery.

Keeping the tease on, Karan let the netizens guess the third lead for quite a long time. Karan, finally, unveiled the name of his ‘Suitable boy’ on Thursday. The producer took to his official social media handle to post a series of pictures of Lakshay, welcoming him on his new production, writing, “Both happy and excited to introduce the new kid on the Dharma block! LAKSHYA will be making his debut with us in #DOSTANA2 and from thereon, we hope to start a solid cinematic journey together! Please welcome @itslakshyaand shower him with all your love and blessings…”.

Both happy and excited to introduce the new kid on the Dharma block! LAKSHYA will be making his debut with us in #DOSTANA2 and from thereon, we hope to start a solid cinematic journey together! Please welcome @itslakshya and shower him with all your love and blessings…

Along with Karan, Dharma Production also welcomed the new actor by sharing his photos and captioning it, “This family just got bigger! Welcoming @itslakshya, the newest member of the #Dharmafamily & the #Dostana2 cast. Buckle up, it’s going to be a beautiful journey ahead!”

Excited and overwhelmed by the news, Lakshya showed his gratitude to the production house and shared a heartfelt note, writing, “Overwhelmed, grateful & down right EXCITED for this wonderful new beginning! Thank you for this welcome into the #Dharma family, can’t wait to get started on #Dostana2! @Dharmamovies”.

Overwhelmed, grateful & down right EXCITED for this wonderful new beginning! Thank you for this welcome into the #Dharma family, can't wait to get started on #Dostana2! @Dharmamovies

Well, we all know Karan is always seen launching star kids and thanks to controversy queen Kangana Ranaut for naming him as the ‘Flagbearer of Nepotism’, people soon started questioning about the parents of the new member of ‘Dostana 2’. 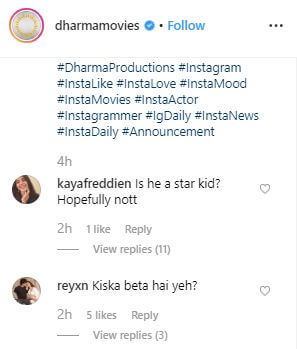 Subduing all the controversies regarding the connection of Lakshya to Bollywood Industry, Karan posted on his Twitter handle about Lakshya’s audition process and how grateful he is to Shanoo Sharma for finding his ‘Suitable boy’.

Yes I woke up to several inquiries asking about his film industry connections!!! He is NOT from the business and went through a legit audition process !! Am grateful to Shanoo Sharma for introducing LAKSHYA to @DharmaMovies https://t.co/47i6k0FSFe

Even though Karan has denied the newbie’s connection to the Industry but we have seen him on the small screen as Parth in MTV India’s Warrior High and several other TV shows. The actor was formerly known by the name ‘Laksh Lalwani’ and also played a small role in Shraddha Kapoor starrer ‘Haseena Parkar’.