Meet The New Superheroes Of MCU

2019 has been quite a year for all the Marvel fans. With the end of a decade old saga, the third chapter of Marvel Cinematic Universe came to its climax. The D23 Expo of Disney at the Anaheim Convention Centre in California gave a glimpse of Disney+, the new streaming service from The Walt Disney Company, set to launch on 12 November.

Marvel Fans got an extra special treat when Marvel Studios’ Kevin Feige took the stage to not only give fans a glimpse of upcoming shows announced but also to surprise fans with announcements of new shows set to release.

Lawyer Jennifer Walters is transformed into a Gamma-powered Super Hero through a blood transfusion thanks to her cousin Bruce Banner, making her imbibe all the powers of Hulk. With sensational strength and power, She Hulk never forgets to fight for justice.

Just announced at #D23Expo, SHE-HULK, an original series from Marvel Studios, only on Disney+ pic.twitter.com/fUrYwfGLOQ

Kamala Khan aka Ms. Marvel is a teenage Pakistani-American Superhero protecting the streets of Jersey City with the ability to change her whole appearance, is soon set to enter the Marvel Cinematic Universe, with Marvel Studios’ ‘Ms. Marvel’ exclusively on Disney+.

Just announced at #D23Expo, MS. MARVEL, an original series from Marvel Studios, only on Disney+ pic.twitter.com/serwRYXsRG

The cloaked Avenger of Marvel Cinematic Universe, Marc Spector aka Moon Knight struggles with multiple personalities and amoral inclinations. A boxer, a Marine, and finally a CIA operative, Marc fights against all odds.

Just announced at #D23Expo, MOON KNIGHT, an original series from Marvel Studios, only on Disney+ pic.twitter.com/iMHyl7BuAQ

To wrap up the Marvel Studios portion of the Disney+ presentation, Kevin Feige unveiled three new upcoming movies with some new characters.

Phase Four of the Marvel Cinematic Universe is going to kicks off with ‘Black Widow’, set to release in 2020. Cate Shortland directorial film will star Scarlett Johansson as Natasha Romanoff/Black Widow, David Harbour as Alexei the Red Guardian, and Florence Pugh, who will play the role of Yelena. 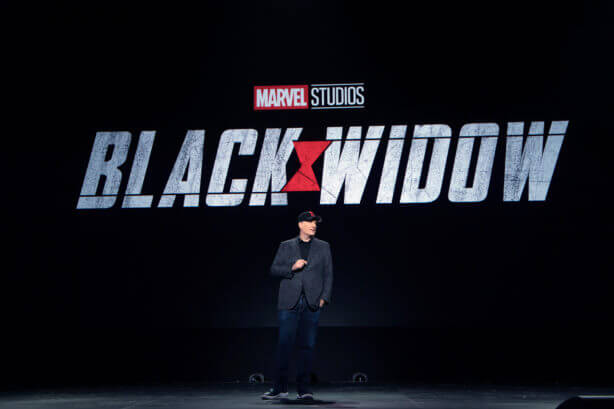 Bringing the cast of ‘The Eternals’ to the stage Feige revealed three new cast members and their characters. Gemma Chan, who is set to play humankind-loving Sersi, Kit Harington, who is casted as non-Eternal Dane Whitman, and Barry Keoghan, who portrays a loner Druig. Chloé Zhao, who helmed the critically acclaimed Sundance film ‘The Rider’, is the director of ‘The Eternals’, which is set to release in November 2020.

A closer look at the cast of Marvel Studios’ THE ETERNALS on stage at the #D23Expo pic.twitter.com/bTSkoXh6xI

Kevin Feige also announced the sequel of ‘Black Panther’ which is set to release in May 2022. Co written and directed by Ryan Coogler, ‘Black Panther II’ will be the part of Phase five of MCU.

So, who is excited?