“I don’t feel like I am the only one anymore. Thank you.” On an internet inhabited by vicious name calling trolls, Indu Harikumar’s social media pages are a safe space where persons across gender and sexual identities, including her, have found a community that heals together.

When Indu started illustrating 100 Indian Tinder Tales it was to give her artistic practice structure and discipline. The project, however, defined her work in the years to come where her community addresses both the beauty of the body and its desires, and the loneliness of the trauma and shame that is inflicted upon both.

Indu’s work manifests itself through illustrating the travails of the body and the person inhabiting it as they seek love and validation. But the conversations that she has with those who choose to share their stories with her are an exercise in empathy and mutual trust.

She talks to us about her projects – Abortion Stories, Identity and Notes to my Lovers – and building an extraordinary space for love on the internet. 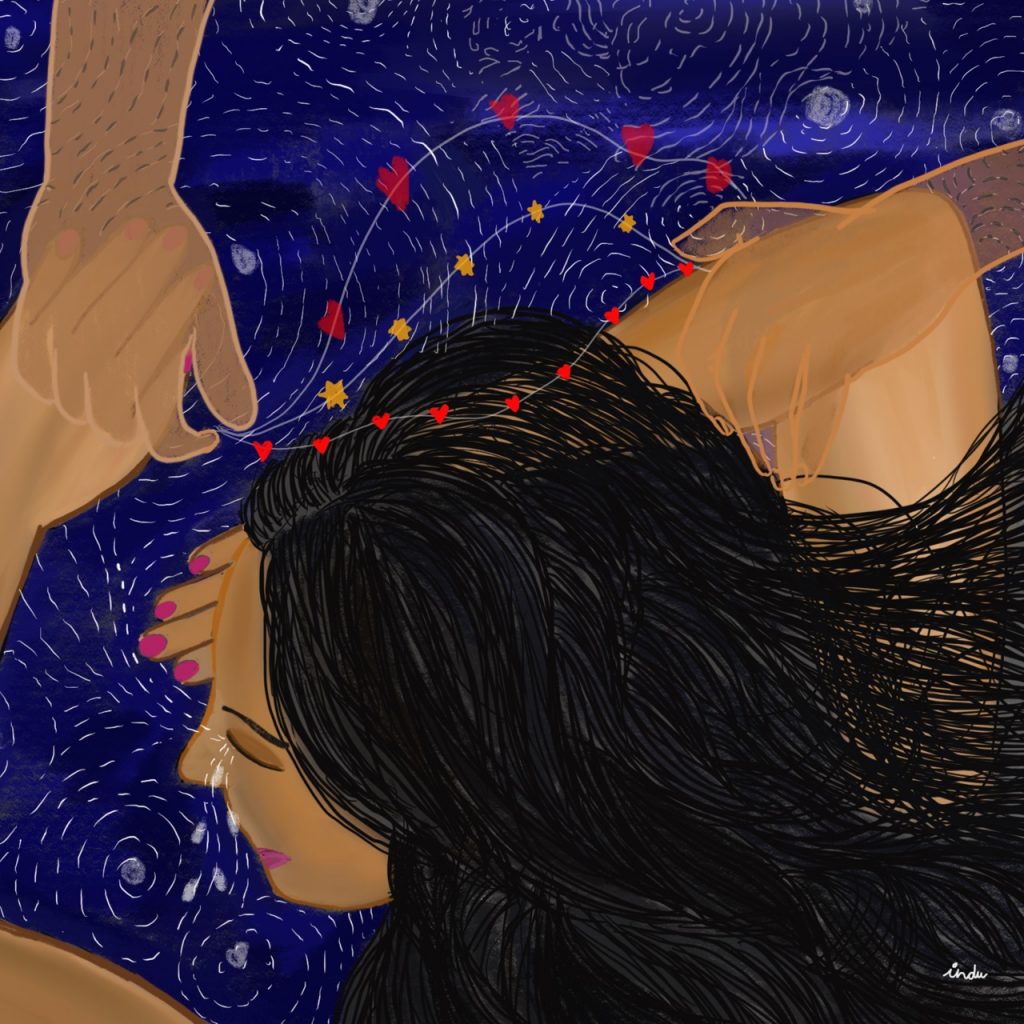 1.From illustrating for children’s books and making art with them, you have switched to illustrating about Identity, sexuality and gender, how did this come about? How has this journey been?

I worked on the web for 7-8 years and one of my jobs was in Chandamama, a children’s magazine. I had access to their archives, which I then started to draw again. After I finished with Chandamama, I went and volunteered for a month with an organisation called Mumbai Mobile Crèche that runs at various construction sites for children. I used to do craft class and we didn’t have money, so I just used to pick up things for the class and started to blog about it. ‘Pratham Books’ found my blog and used to ask ‘what are you going to do next class’, that is how I started to hear from other publishers. So, it was not really a plan. In 2015, I went to Vienna for an art residency of three months. That’s when I felt like I should do more than just children stuff and also wanted to try something new and I had used Tinder in Vienna. Initially it was a bit creepy because I had a lot of stuff online even then, and people would look me up. So, I thought I should ask people what their experiences were. I really didn’t expect anyone to write to me or tell me their experiences, because why should they? It is impossible for me to project how any project will pan out because it is always led by the contributions that come in and it is also very difficult for me to read everything or have a structure because there are just so many stories that come in, so I randomly pick. My work is one place where I don’t try to control, otherwise everywhere I am trying to control my life and (laughs), but it’s very painful for me to do that when it comes to my work because I have no idea what the plan is. 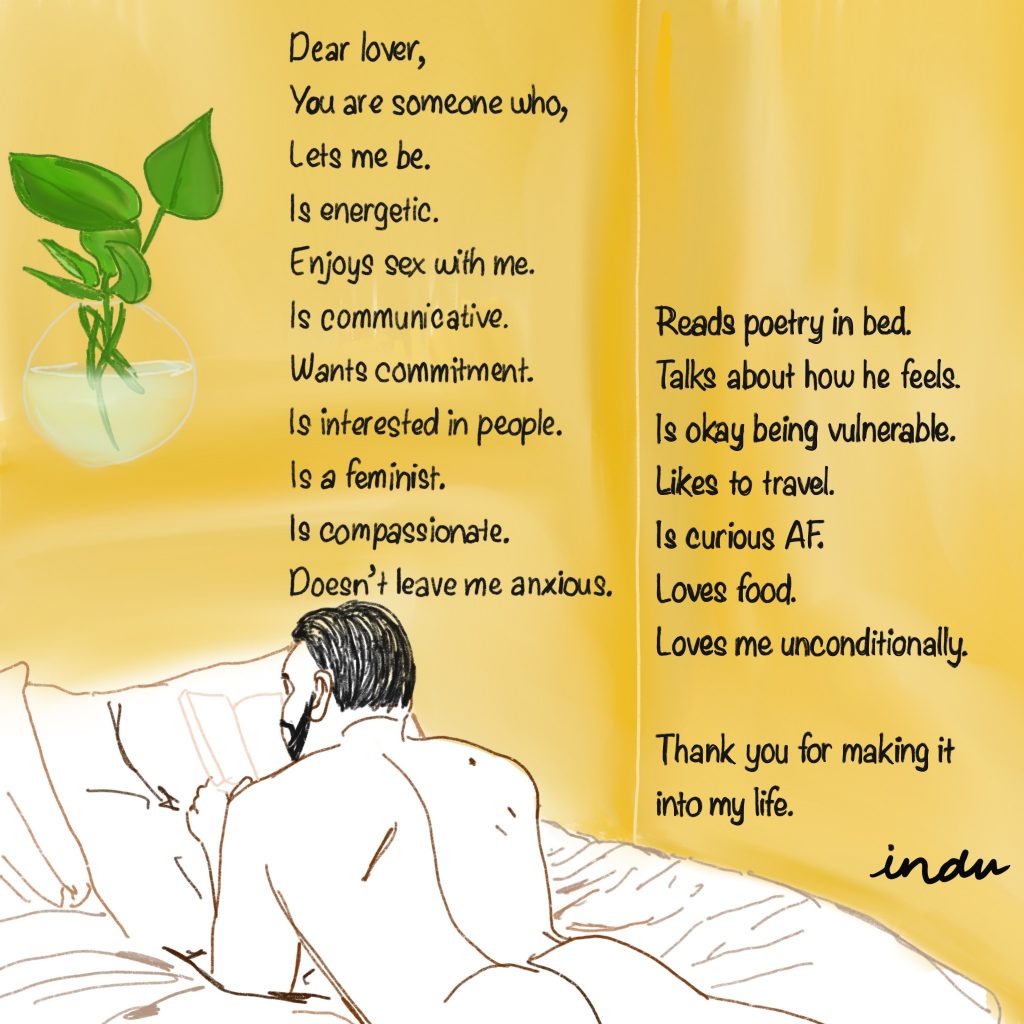 2.All your crowdsourced projects are pretty intense and personal, how does it feel to be bestowed with so much personal information from strangers?

When I initially did #100IndianTinderTales, it was overwhelming. When someone tells you something personal, not everything is happy. Everything has a reaction because we are humans. And when someone tells something bad that might have happened to them, you don’t know what to do. I didn’t know where to draw the line when I did 100IndianTinderTales and it was also very difficult because stories were coming on Facebook messages where they can see that you read their message. I don’t follow back people who follow my work because I don’t want to know more about them. I already have a lot of data. It is also some kind of validation for me, because they have trusted me with that kind of information which they may not trust anyone with. Last year, I did ‘Identity’ and I was always worried about what if someone hacks my account. For me, it is very therapeutic to do the work even though it gets overwhelming from time to time.

3.Tinder Tales, Identity and Notes to My Lovers, all have seen quite a success, what has been your inspiration throughout it all? What keeps you moving?

One is that it’s very engaging, it helps me create new art. I find stories that I get and I learn so much while doing it. I never ever thought that anyone would study my work but things are happening now. People call me now to do projects which also give me the money to do free projects that I do. It’s been possible because one is that, people talk. I find it exciting because it shows so much trust from people and it is not possible to back up from that. It also brings me a lot of information about the world which gives me a lot of inspiration because my vision of what I know of the world is very limited. I ask people how they want to be drawn and I have to look up half of the things people ask for. I do write back to people and ask for context, they end up giving me a part of conversation or something like that and that is a tiny window into somebody’s life and I think it’s a privilege to have that window, it inspires me in many ways.

4.What are artists’ dates?

There is a book called ‘The Artist’s Way’, by Julia Cameron. Two basic things that she says and stays with me are that every day when you get up in the morning write down three pages of whatever that comes in your head. For me it’s a great way to see that ‘oh I am worried about that’. The artist date is that every week I go out to do something that fascinates me, and I have to do it solo. So, it’s kind of going out on a date with yourself but to do something that you are really excited about. A lot of times we don’t pay attention to what we want to do. I think it’s a great way of seeing yourself.

5.Who will you say are the people or artists that inspire you, or what kind of work do you follow?

I don’t follow people who put up personal things other than that I follow a lot of work. I really enjoy embroidery; I am not great at it but there is a lot of embroidery that I look at. I look at a lot of contemporary artists that put up their work on Instagram and I am also trying to bring down the time that I spend online, I don’t look at my ‘explore’, I look at ‘stories’.

6.How will you say your own projects helped you as a person?

One is that they have given me vocabulary. The great thing about stories is that there is no one way to interpret it, you can take whatever message that you want to do and there is a place for you to inhibit those stories. I think it’s very democratic and a great way to learn. I have learnt a lot about feminism through the work that I do. Hearing people’s stories changed my view on so many things. I have started to question. Doing ‘Identity’, meant a lot of acceptance for me. When you start to hear people’s stories, you also see that they are struggling in their own way, and that struggling connects us to each other, that’s what makes us human, the struggle, shame and guilt. I used to feel that I don’t belong, hearing these stories makes me feel like I do. It really changed my worldview and gave me a voice in many ways. I am someone who doesn’t like to be in the periphery and I don’t like the quadra I have made. Doing something like this also means that I have to do all that press and then once you start to do then it becomes alright. 7.In current times, hate is being preached and spread. How do you keep up with trolls and a society that is still not very open to talk about sexuality and is biased when it comes to gender?

I have a lot of support online, which is why I am able to do what I do. On and off, I find people who want to cross the line but I don’t engage. A lot of my work is around shame, so I also try not to name and shame people. Sometimes I do write about them but I will not name them. Mostly if they bother me after a point, I will block them. I mostly have been very lucky. When I was doing Tinder Tales, I was applying for a short course in the US and I put it online and someone wrote to me saying that I write SOPs for a living and I will do yours for free, that just shows the amount of support online communities have for each other.

8.What are the roadblocks that you face while starting any project?

I don’t take any project thinking that this is how it is going to pan out. Mostly, I have been very lucky because I put it out and immediately someone will say ‘oh, I have a story that I want to send it to you.’ There haven’t really been any roadblocks, especially with starting off a project.

9.What can we expect next?

I don’t plan but I am working on a children’s book right now which might be out in March.

10.Any advice to someone starting out, especially as a freelancer?

The one thing that I want to say is that it took me a long time to stand for myself and ask for money. There is no shame in asking for money. If you want to do more work you will need the money to sustain yourself. Don’t do stuff for free, unless you want to do it for free.

Cat mother with a soul of storms. Words are like the wind, a light breeze to soothe the suffering or a tempest to kindle revolutions.