To gel along with today’s generation and be a part of the social media world, Ratan Tata joined Instagram. In just a few months, the former Tata Groups Chairman has one million followers on the platforms.

Breaking the internet each time with his posts, Ratan Tata is loved on the Gram. From putting up adorable pictures of dogs to sharing throwback images from his young days, the businessman has mastered the social media game and kept his followers fully entertained.

A role model and inspiration to millions, netizens always shower their love and respect on him. The 82 year-old posted a picture of himself laughing at the camera while sitting on the floor cross-legged. Along with it, Mr. Tata penned down a thank you note for his followers who made his journey incredible.

I’ve just seen that the number of people on this page has reached a milestone. This wonderful online family is not what I expected when I joined Instagram and I have you to thank for it. I do believe that the quality of connections you make in this age of the internet is far greater than any number. Being a part of your community and learning from you is truly exciting and makes me very happy and I hope our journey together continues.

Winning hearts of his followers, the solo picture went viral and someone commented on his picture and called him ‘chotu’ but netizens backlashed the user. Have a look at how Ratan Tata came out in support of her: 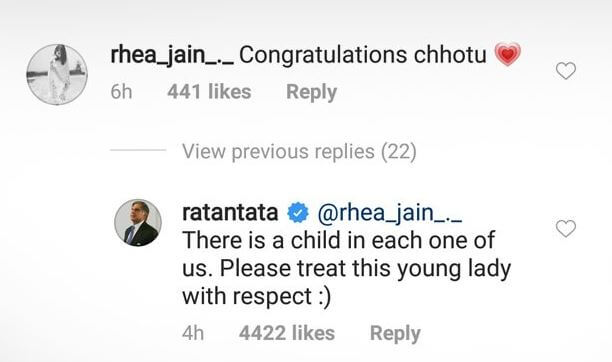 Bliss Of A Perfect Brew At Third Wave Coffee Roasters