• The stories of six nations are captured and expressed through adidas’ innovative Home and Away federation kit designs for the world’s biggest sporting stage.
• With performance and sustainability the top priority, a consistent design approach has been taken across the kits that showcases both creativity and iconic simplicity, enabling players to be the best versions of themselves on the pitch
• Both Home and Away jerseys aim to connect players and fans through shared identity, to create a sense of belonging and confidence throughout the tournament.
• Ahead of the tournament, the kits will be debuted on the pitch by the respective women’s and men’s national teams in the upcoming match windows.
• All the kits are available to purchase exclusively via https://www.adidas.co.in/federations-football and in adidas retail stores until September 12th
Today, adidas reveals the Home and Away federation kits created for the national teams of Argentina, Germany, Japan, Mexico, Spain, Wales, which will be worn on the world’s biggest sporting stage: the FIFA World Cup 2022™. 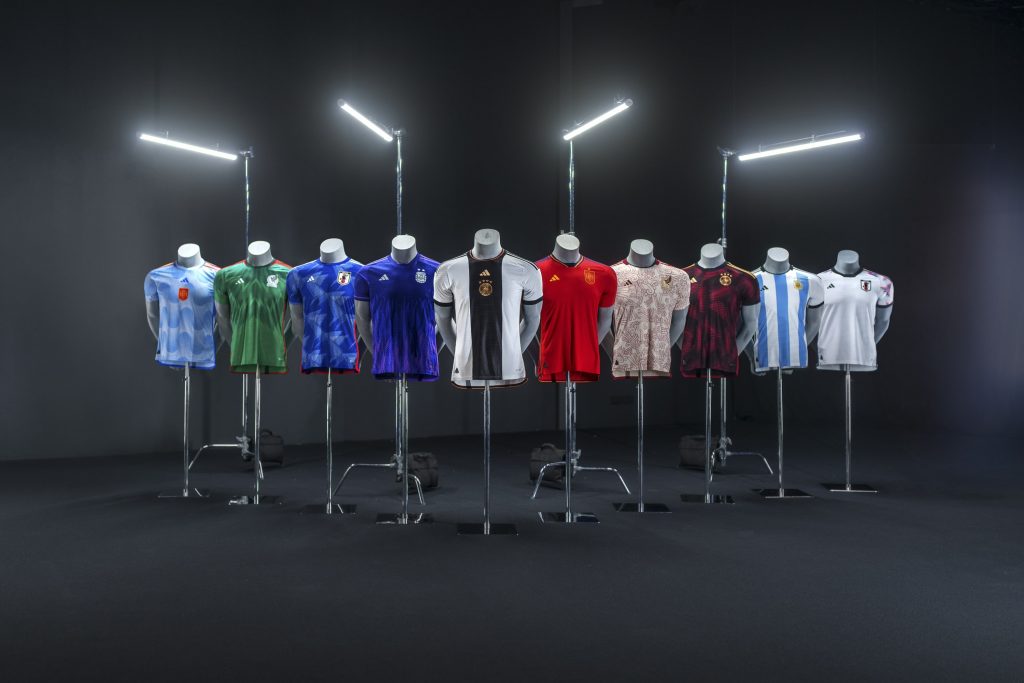 adidas saw each federation kit as a canvas for creativity, and an opportunity to capture and express the spirit of each nation with design features influenced by key cultural touchpoints ranging from the ancient civilizations and Mixtec art of Mexico celebrated in the nation’s away jersey to the origami crow inspiring Japan’s home kit. Dynamic color spectrums represent each unique national identity, with progressive graphics inspired by the future.

“When we design national team kits for tournaments as big as the FIFA World Cup, we always keep in mind that these designs will become a part of legendary footballing history. For us it’s crucial first and foremost to create kits that equip the world’s greatest footballing athletes with performance-led apparel that helps them unlock their highest level of play, while at the same time always featuring unique and unforgettably iconic designs that are bold, eye-catching and create a true sense of excitement amongst fans all across the globe.” said Jürgen Rank, Senior Design Director Football at adidas.

With performance and sustainability the top priority, a consistent design approach has been taken across the kits that showcases both creativity and iconic simplicity, enabling players to be the best versions of themselves on the pitch, with each jersey coming in a slim fit.

Argentina’s away jersey is inspired by the pride of the nation and its quest for a more equitable world. Its vibrant purple hues, representing gender equality, combine with fiery graphics in reference to the national flag’s iconic Sun of May.

Placed over the heart and detailed in gold, a heat-applied team badge takes centre stage on Germany’s home jersey, whilst a bold vertical stripe inspired by the very first Germany shirt, elevates the classic clean aesthetic to new levels. Detailing on the collar and shirt bindings display the iconic colors of the nation’s flag. The away jersey captures the spirit of the team, using the colors of the national flag and blurring the ‘D’ of ‘Deutschland’ to reflect the dynamic football played by the squad.

Representing self-expression, Japan’s home jersey features a bold origami three-legged-crow-inspired design, whilst its away jersey is crafted to reflect the flowing style of Japan’s play: the blurred graphics are also inspired by origami, brought to life through a design that illustrates speed.

Paying homage to its ancient civilisations, adidas infuses Mexico’s away jersey with Mixtec art to summon the fighting spirit of the nation. Amidst the eye-catching all-over design, a sign off on the inside collar displays Quetzal coat’s serpent body – a representation of humankind’s physical abilities.

Constructed from its unique footballing DNA, Spain’s home jersey makes a timeless statement as it’s dominated by the team’s famous deep red color, with color references to the flag across the collar and shirt bindings. The away jersey features an undulating graphic taking dynamic inspiration from the country’s 1982 logo, when Spain last hosted the world’s biggest football tournament.

Created to ignite passionate performances, Wales’s home jersey stays true to its heritage with a vibrant red design inspired by the nation’s fire-breathing symbol, whilst a daffodil under the back collar further instils the pride of the nation. Meanwhile, its away jersey is one for the fans, steeped in the colors of the national flag.

All the kits are available to purchase exclusively via https://www.adidas.co.in/federations-football and in adidas retail stores until September 12th.

adidas is a global leader in the sporting goods industry. Headquartered in Herzogenaurach/ Germany, the company employs more than 61,000 people across the globe and generated sales of €21.2 billion in 2021.

Indulge in the most exquisite High Tea menu only at DELISTIC!