Your guide to amazing views in California 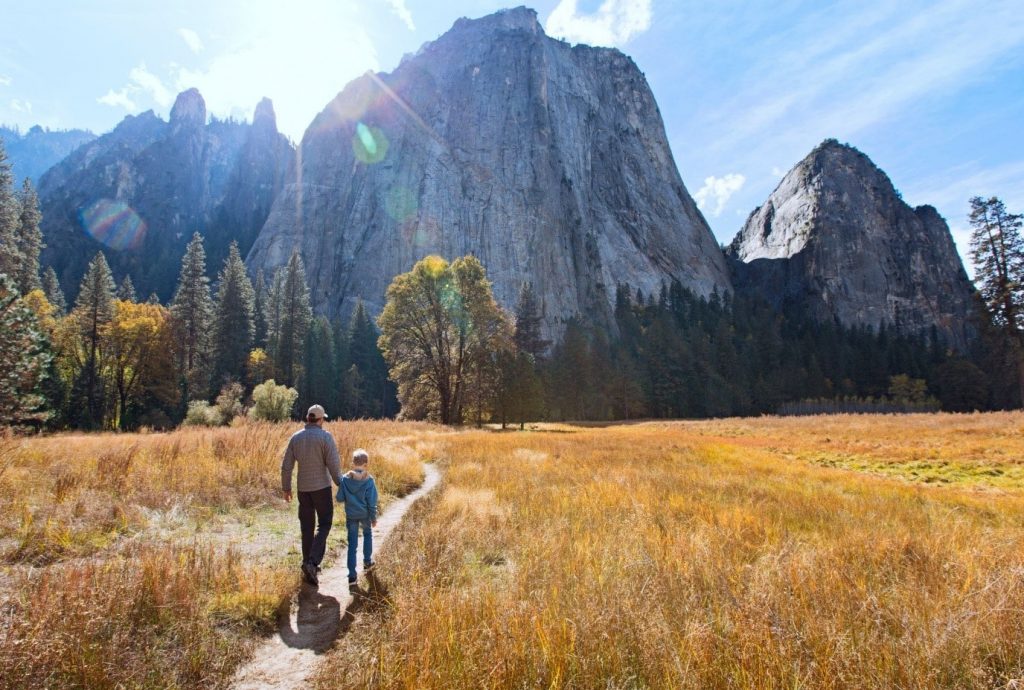 Famous for their giant sequoias, soaring mountains, deep canyons, and roaring rivers, this tandem set of parks have plenty to see. Within the borders of Sequoia & Kings Canyon are Mount Whitney, the highest point in the contiguous United States at 14,494 feet/4,417 meters, and the Kings River Canyon, one of the deepest canyons in North America. Thanks to the General Sherman Tree, the world’s largest living thing, and its gargantuan neighbours, gawking at the big trees is the most popular activity here. The General Sherman Tree measures 103/31-meters around and soars 275 feet/84 meters into the blue Sierra sky—and it’s still growing.

Coming from the east, Yosemite unfolds with high-country beauty, a land of granite crags and alpine meadows, the best known being Tuolumne Meadows, with well marked trails endless scenery. From its tranquil edges, hiking trails lead in all directions—to the alpine lakes set below the spires of Cathedral and Unicorn Peaks, to a series of roaring waterfalls on the Tuolumne River. The meadow’s small visitor center, housed in a historic cabin, features exhibits that focus on the area’s geology, wildflowers, and wildlife. Continuing west you reach the park’s signature site, Yosemite Valley, where shuttle buses can take you to all the key sites.

One of the most photographed regions of Yosemite, Tuolumne Meadows is a wide, grassy expanse bounded by high granite domes and peaks. At elevation 8,600 feet, this pristine meadow extends for more than two miles along the Tuolumne River, making it the largest subalpine meadow in the Sierra Nevada. From its tranquil edges, hiking trails lead in all directions—to the alpine lakes set below the spires of Cathedral and Unicorn Peaks and to a series of roaring waterfalls on the Tuolumne River. The meadow’s small visitor center, housed in a historic cabin, features exhibits that focus on the area’s geology, wildflowers, and wildlife. (Note the access to Tuolumne is limited; roads generally close due to snow mid-November to June.)

At this high-desert preserve, on the eastern side of the towering Sierra, ghostlike tufa towers trim the edges of a one-million-year-old lake.

Get a picture of the natural and human history of the Mono Basin at the interpretive center, just off U.S. 395 north of Lee Vining and Tioga Pass (the only route into Yosemite from this side of the mountains). Decks offer dramatic views—Sierra peaks to the west, chaparral-dotted desert to the east—as well as the lake itself and tiny Wizard Island, a nesting site for Western gulls and other sea birds. Bird walks are offered at 8 a.m. Fridays and Sundays, mid-May through Labor Day.

Look down on the astounding Emerald Bay and you can see why Mark Twain dubbed Lake Tahoe “the fairest picture the whole earth affords.” While the main lake is as blue as a topaz, a color created by Tahoe’s remarkable clarity and depth, this somewhat shallower bay on the lake’s west shore takes on a startling and beautiful blue-green. Pull off Highway 89 and park near Inspiration Point to get one of the best views of the inlet, 600 feet above Lake Tahoe.