Popular singer and painter Soumita Saha took to her social networking page to share images from her intimate engagement ceremony that took place in a popular restaurant in the city of joy. Soumita Saha got engaged to get long time beau Agniv Chatterjee ,now the duo has started preparing for their impending nuptials. 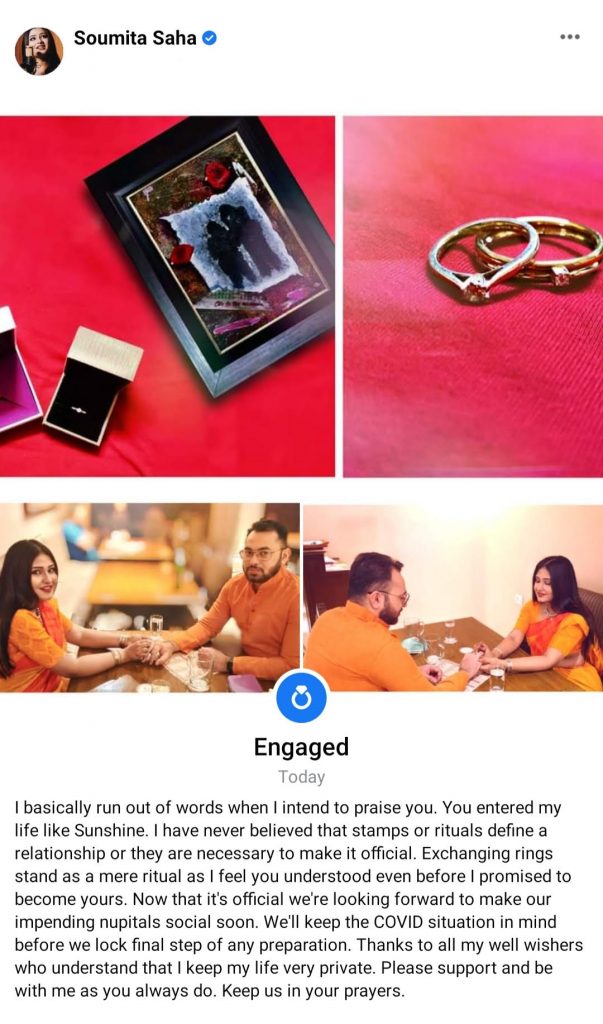 Soumita captioned the image, ” I basically run out of words when I intend to praise you. You entered my life like Sunshine. I have never believed that stamps or rituals define a relationship or they are necessary to make it official. Exchanging rings stand as a mere ritual as I feel you understood even before I promised to become yours. Now that it’s official we’re looking forward to make our impending nupitals social soon. We’ll keep the COVID situation in mind before we lock final step of any preparation. Thanks to all my well wishers who understand that I keep my life very private. Please support and be with me as you always do.”

Soumita Saha is successful playback singer in tollywood who started her journey with EdM. Soumita’s experimental work in the field of Tagore Music is considered revolutionary. She is popular for her contribution to the field of Rabindrasangeet. Soumita is a trained painter too. Her art-work gets exhibited in popular art galleries in metro cities of the nation. Her art work is internationally popular as well. One of her artwork got exhibited at Portland’s ArtReach Art Gallery ( Art Museum ) in 2020. After that her art work got exhibited in many cities in United States. Some of her popular art work includes Aberrant, Afflatus, Conscience of India. During lock down she organised some solo exhibitions amongst which Envisaging Michael on MJ’s death anniversary and Ruminating Frida on Kahlo’s birth anniversary got immensely praised across the globe. 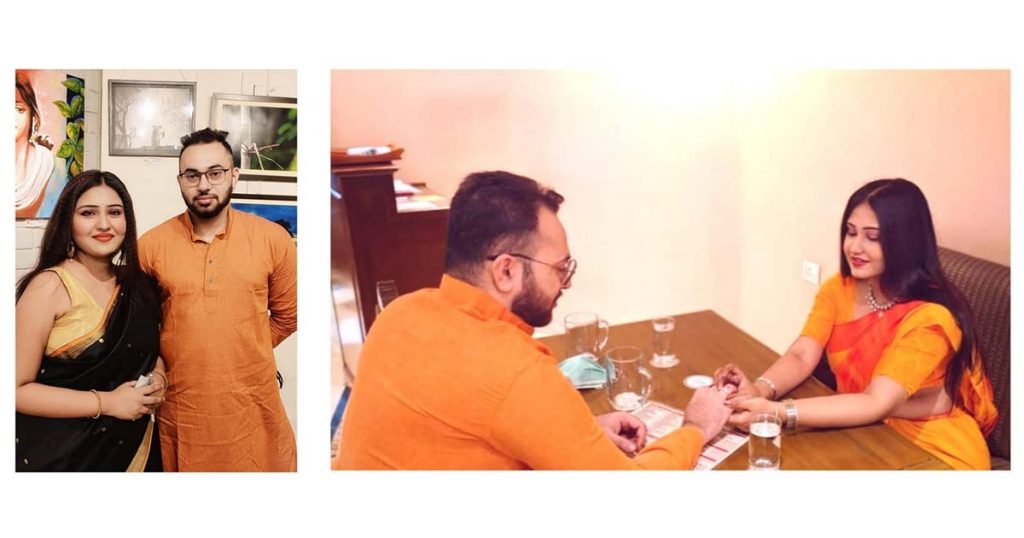 Soumita is active on social networks, she uploads pictures with beau Agniv Chatterjee pretty often. Soumita’s name had been linked to many insiders of Music Industry and outsiders as well. Soumita always prefered to blow away the existence of such rumours. When rumours and stories of Soumita dating software engineer Agniv Chatterjee started cooking up, instead of trying to prove “we’re just friends” she made sure her post say loud and clear where the relationship is heading. Soumita and Agniv are spotted together not only in Malls, multiplexes and popular restaurants and cafes in kolkata but also in Pune and Mumbai as well. Agniv is a software professional working for a software company in a prestigious designation. The duo makes an adorable couple. This admirably adorable Couples completed their ring exchange ceremony in a Five Star restaurant situated in the City of Joy. The couple doned ethnic outfit on their special day.