TECNO Mobile has got India feeling the football fervor, as the premium smartphone brand from TRANSSION India, hosted the Premier League Trophy in Mumbai at Infiniti Mall, today in the presence of legendary English (former) footballer Shaun Wright-Phillips along with TECNO Mobile India CEO Arijeet Talapatra. 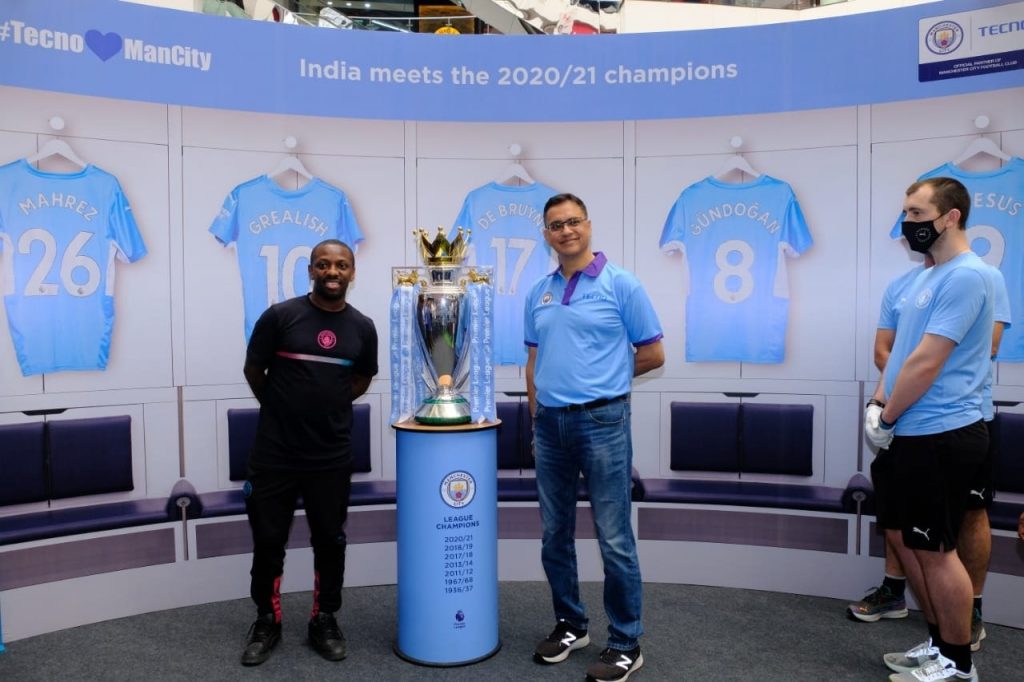 The event was part of Tecno Mobile’s initiative to connect with the youth and boost sports in India. TECNO has been a global partner of Manchester City since 2016 and both the brands follow similar values of holding consumers at the highest pedestal by providing them with unique mobile experiences and exceptional matches every day, respectively.

Shaun Wright-Phillips has been a leading English footballer and he has played in notable football tournaments for Manchester City like Premier League and Football League, and at senior international level for the England national team.

Arijeet Talapatra, CEO, TECNO Mobile India, stated, “TECNO as a brand is known to be catering to a young audience. Out of the multiple verticals that intrigue youth TECNO chose sports as its foundation to attract the Zillennials. Our association embodies perfection, excellence and passion to succeed beyond limitations and is an example of how both the entities endlessly aim to bring the young football admirers’ dreams into reality. We are delighted to bring Premier League Trophy to India, as Man City celebrates a highly successful season and gear up for a much bigger success. With this ongoing association, we are steadfast to form stronger correspondence with aspiring footballers and Indian smartphone users.”

In addition to TECNO and Man City’s efforts to strive to make a positive impact on young minds with the integration of technology and sports, both the brands came together to launch their purpose driven initiative of identifying football enthusiasts from the field of journalism. The winners will be given the once-in-a-lifetime opportunity to work with GOAL and cover Pep Guardiola’s men from close quarters until the end of the season. They will be mentored by GOAL’s regional editorial team as well as dedicated Man City correspondent – Jonathan Smith.

Commenting on his visit to India, Shaun Wright-Phillips, said, “It is fantastic to be in India with Manchester City and attend events like this with club partners such as TECNO in the country. The fans in India have been so welcoming so far and it’s great to see the collaboration between TECNO and Man City inspiring young people across the globe.”

Within five years of inception in India, TECNO has witnessed robust growth and has strengthened its position among the top 5 smartphone players in the country in the sub-10K segment. And with the latest POVA and CAMON series smartphones the brand continues to increase its focus in the 10K and above segments as well. With the approach of staying ‘ahead of the curve’ and a product philosophy that rests on ‘segment-first’ features, TECNO has consistently pushed the envelope by bringing in the latest technology to the Indian consumer at disruptive pricing.

TECNO’s marketing strategy is focused on increasing brand awareness and brand recall by establishing a profound bond with the youth of India. TECNO and Manchester City’s association aims to strengthen their brands’ footprint in terms of marketing and advertising campaigns across the country. Moreover, TECNO is Manchester City’s Official Global Tablet and Handset Partner since 2016. Mancity is already a prominent football club in Africa and is substantially expanding in 40 emerging markets including India, where City’s fan base continues to grow.

TECNO Mobile is a premium smartphone brand from TRANSSION Holdings. With “Stop at Nothing” as its brand essence, TECNO is committed to unlocking the best contemporary technologies for progressive individuals across global emerging markets, giving them elegantly designed products that inspires consumers to uncover a world of possibilities. TECNO understands the needs of consumers from different markets and provides them with localized innovations which is demonstrated through their mastery of serving consumers who are “young at heart” and never stops pursuing excellence. TECNO’s portfolio spans across smartphones, smart wearables and AIoT devices made for consumers in over 60 emerging markets across the world. TECNO is also the global Official Partner of Manchester City Football Club.