Duchess of Sussex, Meghan Markle, is the Guest Editor for the September issue of British ‘Vogue’. The duchess is going to be the first Guest Editor in the history of 103 years. The duchess has curated the content with British Vogue Editor in Chief, Edward Enniful to create an issue that highlights the power of the collective. The issue is named ‘Forces For Change’.

In the issue, fifteen women from a diverse group of life are featured. Each woman on the cover has a driving impact and raising the bar for equality, kindness, justice, and open-mindedness in society. The women featured include models, actors, politicians, advocates, and authors, who have worked towards society and have etched their names in the history of the world.

Meghan Markle showed her gratitude towards the Editor in Chief of British Vogue for providing her with the opportunity where she worked behind the scenes for seven months to create an effective issue. She also called her role as Guest Editor of the magazine, to be rewarding, educational, and inspiring.

We are proud to announce that Her Royal Highness, The Duchess of Sussex is the Guest Editor for the September issue of @BritishVogue. For the past seven months, The Duchess has curated the content with British Vogue's Editor-in-Chief Edward Enninful to create an issue that highlights the power of the collective. They have named the issue: “Forces for Change” For the cover, The Duchess chose a diverse selection of women from all walks of life, each driving impact and raising the bar for equality, kindness, justice and open mindedness. The sixteenth space on the cover, a mirror, was included so that when you hold the issue in your hands, you see yourself as part of this collective. The women on the cover include: @AdwoaAboah @AdutAkech @SomaliBoxer @JacindaArdern @TheSineadBurke @Gemma_Chan @LaverneCox @JaneFonda @SalmaHayek @FrankieGoesToHayward @JameelaJamilOfficial @Chimamanda_Adichie @YaraShahidi @GretaThunberg @CTurlington We are excited to announce that within the issue you’ll find: an exclusive interview between The Duchess and former First Lady of the United States Michelle Obama, a candid conversation between The Duke of Sussex and Dr Jane Goodall, inspirational articles written by Brené Brown, Jameela Jamil and many others. Equally, you’ll find grassroots organisations and incredible trailblazers working tirelessly behind the scenes to change the world for the better. • “Guest Editing the September issue of British Vogue has been rewarding, educational and inspiring. To deep dive into this process, working quietly behind the scenes for so many months, I am happy to now be able to share what we have created. A huge thanks to all of the friends who supported me in this endeavour, lending their time and energy to help within these pages and on the cover. Thank you for saying “Yes!” – and to Edward, thank you for this wonderful opportunity.” – The Duchess of Sussex #ForcesForChange

The sixteenth space on the magazine cover is a mirror, where an individual is able to see herself and feel confident to stand among such great women and try to bring a difference in society.

There will be an exclusive interview between the duchess and the Former First Lady of the United States, Michelle Obama. It will also feature a candid conversation with the Duke of Sussex and Dr. Jane Goodall, who has recently conducted a week-long environment conservation program at Windsor Castle. 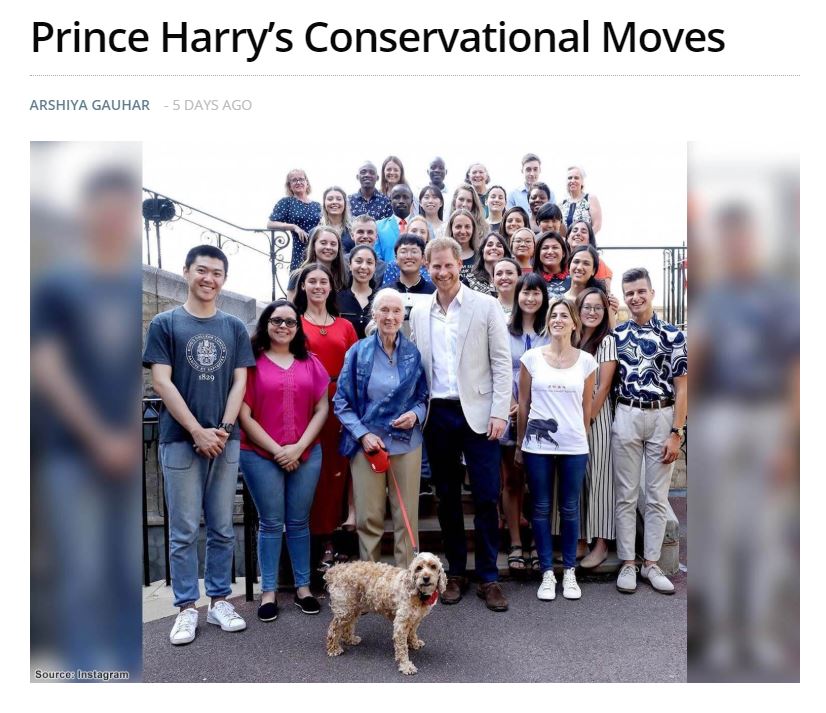 The issue will be out on 02 August.