Directed by Shoojit Sircar, the film marks the brand’s efforts with #SpeakSign 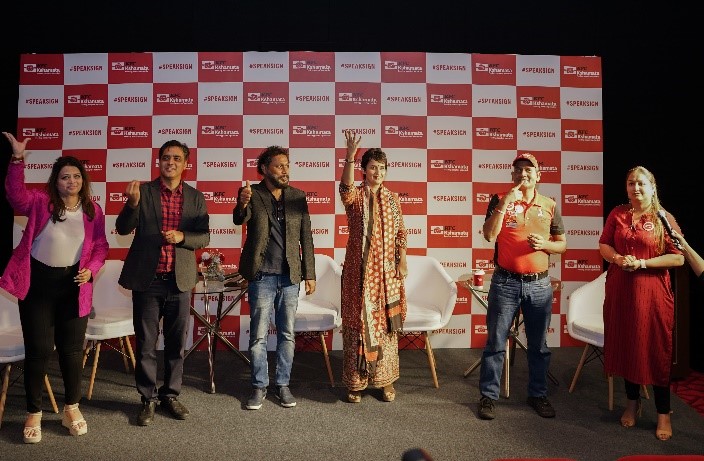 All her life, some one or the other has been holding Ishmeet’s hand, protecting her and showing her the way. Until the day she proclaims that she cannot hear the word ‘no’. What happens then? Watch Ishmeet and follow her journey in KFC’s latest film ‘Kshamata’. Directed by acclaimed filmmaker Shoojit Sircar, the film was launched today on occasion of International Day of Sign Languages at an exclusive screening at PVR Chanakyapuri, Delhi, by Moksh Chopra, GM, KFC India and Shoojit. The heart-warming film is a glimpse into the life of Ishmeet, portrayed beautifully by Ashmit Kaur & Sapna Soni, as she breaks the societal shackles of what she can and cannot do. The screening was followed by a panel discussion with Moksh, Shoojit, Ritu Sharda, Chief Creative Officer, Ogilvy and Dr Sujaya Banerjee, Founder & CEO, Capstone People Consulting & Founder Women Leadership Forum of Asia as the panellists’ exchanged views on unlocking potential for the Speech & Hearing Impaired (SHI). Urging people to #SpeakSign, guests at the event were tutored in basic Sign Language by Indrajeet, a specially abled team member of KFC.

Speaking about the Kshamata film and the brand’s journey towards bridging the ability imbalance gap, Moksh Chopra, General Manager, KFC India, said, “Our work on the Kshamata program goes beyond the hiring function. With #SpeakSign, we are strengthening our efforts to create awareness & acceptance of sign language as a mode of communication, striding to lower barriers and nurture inclusivity. Drawing inspiration from the lives and realities faced by our own specially abled team members, we are extremely humbled to present the story of Ishmeet. We are grateful to Shoojit Sircar and our agency partner Ogilvy in helping us bring this story to life.” 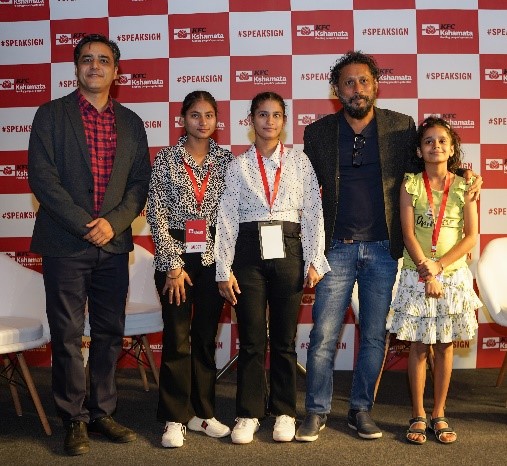 Said Ritu Sharda, Chief Creative Officer North, Ogilvy, as the agency that scripted and conceptualised the film, “This is a story of resilience. The story of a young girl who wants to stand on her own two feet despite all odds. The central thread of the film is the holding, and eventual letting go, of the hand – a poetic declaration of the ‘kshamata’ of our girl. It was an honour to have partnered with Shoojit Sircar to create this for our partners at KFC, who are truly committed to the purpose of diversity and inclusion.” Filmmaker Shoojit Sircar shared his experience of creating the Kshamata film saying, “I wanted to tell the story in a very real and authentic way. For that, it needed to be told from the point of view of the specially abled girl. I wanted to cast people who are specially abled, and not just actors. And eventually, it is the innocence and lived experience of the two girls that has shone through and has made this film feel honest.”

The film opens on a serene background with Ishmeet eagerly awaiting a train to pass by. As she smiles and occasionally waves, perhaps wondering where the passengers are headed to, her sweet revere is broken by her mother clutching her hand, reminding her that she isn’t supposed to let go. Then on, her life is a series of handholding, from one stage to another, always being held on either by a family member, a friend or a teacher at school; seeming more a life reality than a need. But she experiences an unlock moment later in life that changes her perspective. She finally comes into her own surpassing societal barriers, in a moving scene with her mother as she urges ‘Abb to haath chod do’.

KFC India has been a pioneer in enabling the Speech and Hearing Impaired by extending employment & growth opportunities to them since 2008, employing & supporting more than 150 Speech & Hearing-Impaired team members are present. To mark the occasion of International Day of Sign Languages this year, the #SpeakSign campaign was rolled out in 33 Special KFC restaurants (restaurants operated by specially abled team members) across 19 cities, encouraging customers & team members to communicate only in sign language. With KFC Kshamata, the brand has pledged to drive 2X empowerment by 2024, by doubling the number of Special KFC restaurants and increasing the women workforce at their restaurants. Taking the pledge beyond their restaurants, the brand has partnered with the Indian Deaf Cricket Association (IDCA) as ‘Principal Sponsor’ to build visibility and growth for the sport of deaf cricket in the country.

KFC, a subsidiary of Yum! Brands, Inc. (NYSE: YUM.), is a global chicken restaurant brand with a rich, decades-long history of success and innovation. It all started with one cook, Colonel Harland Sanders, who created a finger lickin’ good recipe more than 80 years ago, a list of secret herbs and spices scratched out on the back of the door to his kitchen. Today we still follow his formula for success, with real cooks breading and freshly preparing our delicious chicken by hand in more than 26,000 restaurants in over 145 countries and territories around the world.