Located between piazza del Duomo and piazza della Signoria, Via dei Calzaiuoli in Florence is one of the most prestigious streets for Florentine shopping and it’s where the new Graziella Braccialini store opened, the maison born from the union between the art of leather goods of the Florentine company Braccialini and the fine goldsmiths of Arezzo Graziella Holding, which wanted to further consolidate its presence in the Tuscan city. 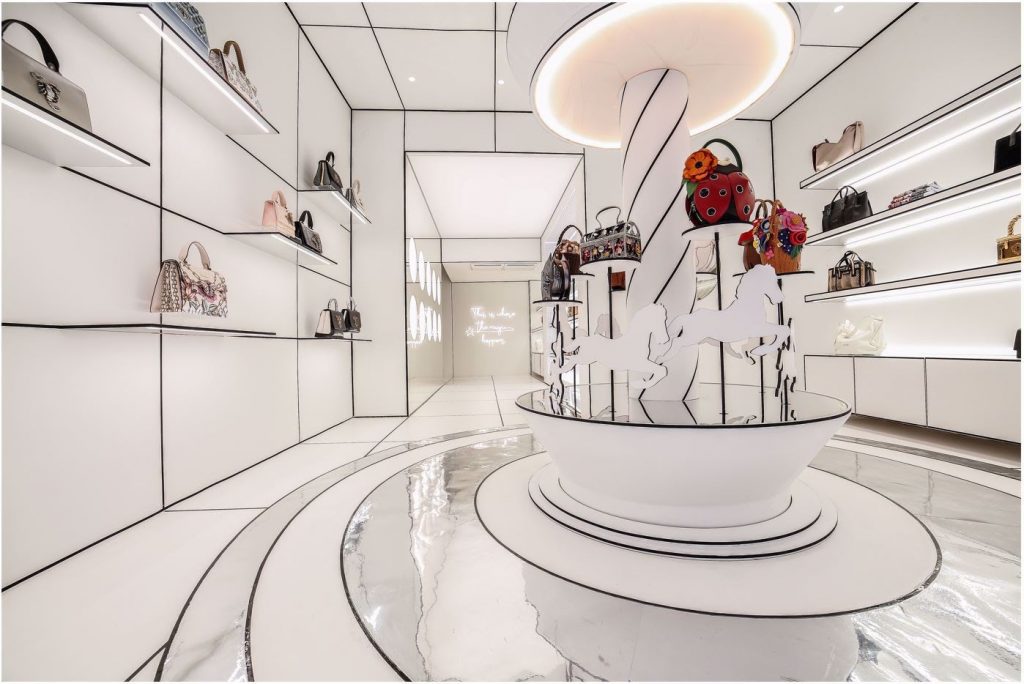 The project, launched in February 2021, was implemented in record time and signed by architect Emanuele Svetti, who has been handling the concept of Graziella Braccialini projects around the world for some time.

“We started with a blank sheet to fill in – explains the architect – with the idea to create a dreamlike, irreverent and at the same time rigorous container”.

The result is a modern store that plays with the desires of the Contemporary Woman but is also ready to face new challenges of the multi-channel approach.

The Florence space is spread over two floors for a total of 200 square meters (130 square meters of commercial area) with a large window on the street.

“Working in a historic building requires sensitivity – continues Emanuele Svetti – for this reason, the intervention was developed taking into account the previous spaces and partitions, opening a sort of dialogue with pre-existing structural elements that involved an obstacle in the future space, this is how we have transformed the ‘limits’ into play”.

For those who follow the Tuscan brand, it will be easy to perceive how the Braccialini store in Florence is a 2.0 version of the first concept created in Rome 3 years ago, with which the company intends to start a policy of new openings at national and international level. In fact, Braccialini considers with great attention and commitment the role of points of sale within its marketing strategies, although many brands have projected themselves towards digitalization of their stores. The Company’s vision today is to develop the concept of multi-channel, integrating at the same time the presence of spaces designed for online sales, as well as events and presentations related to the digital world.

PLAYING WITH THE GAME

“We enjoyed ‘playing with the game’ – says the architect – bringing the wonderful notebook by Braccialini into the store where Contemporary Woman, the one who is not afraid to hide the child inside, can find her joy and the light-heartedness that she jealously keeps in herself. It’s so fascinating to mix the spaces of the store as if they were a Luna Park on Mars or a Casino in the Center of the Earth, waiting for Houdini to come down on the stage.”

With this mood in mind, going up to the first floor, one is struck by the presence of a totemic-shaped display element, composed of overlapping gaming dice taking the customer into a fairytale experience, which continues entering the adjoining room, where a chessboard molds on the vault, letting some pieces fall which, as in a Metaphysical work, lose the influence of the force of gravity following the curvilinear line of the vault itself.

It is a gigantic top, the one that stands out in the center of the “Themes by Braccialini” room, the iconic collection, made up of pieces that have now entered the history of the female accessory par excellence. In this sort of “magic box,” the space has been made multidimensional using 2 mirror surfaces positioned opposite each other, and in particular, in this case, the ceiling and the floor create this atmosphere of “oblivion”, with the customer experiencing the sensation of levitating in the “Magical World of Braccialini”.

“White is not seen as the absence of color, neutrality, absence of personality, but rather as a decisive and essential color – adds Emanuele Svetti – in fact, the design choice did not enhance the chromatic power, it was like painting a white space where nothing is drawn, letting the space define itself.”
This choice results in the celebration of Braccialini’s handcrafted product – which lives of its own color – which finds a sort of the fourth dimension within the spaces created by studio Svetti with a kind of “tailor cut”.

The Florentine store becomes further proof that for Emanuele Svetti it should not be the shop that attracts attention, but what is exhibited inside, so, like the scenography in a theatrical performance, it must only make the customer shopping experience incredible.

From a technical point of view, all the walls have been smoothed and integrated with water-based satin enamel, on which special “wraps” in opaque black tape have been applied, which create the idea of entering the room on the viewer. a three-dimensional model, a bit as if the space were generated by software, so on the pure and refined white of the “box” “decisive and ferocious” lines are drawn that generate exhibition spaces with niches, shelves, and portholes that, through the use of light, become points of attraction and attention for the customer within the store.

“The staircase that serves the two floors of the store was one of the crucial items of the store, because unlike other stores designed by the studio, in this case, it is hidden, it was part of the space but laid inside it in a “shy” mode – says the architect – for this reason we decided to make it “the ladder of every woman’s dreams” imagining it as the terminal to reach heaven, the one where every dream can come true”.

To achieve this result, the studio worked on light as an attractive element, as a stimulus for female curiosity, first creating a sort of “light gallery”, ethereal, which takes the client inside and begins to “tell” a story with a neon outlining the words “where the magic happens”, which then became the claim of the newly opened store.

Works were carried out and coordinated by Marchi Interior, a Modena-based company specialized in the realization of turnkey projects, which made it easy to create furnishing accessories designed by studio Svetti specifically for the Florentine flagship such as the “dama” poufs, the dice-shaped elements, which become seats and displays depending on the size, the Carousel that stands out in the center of the store, the metal hangers and the counters for the sale and display of the product.

The inauguration of the Florence store took place at the end of July 2021, in the presence of the president of Graziella Holding Gianni Gori, the honorary president Graziella Buoncompagni and the commercial and retail director Giacomo Gori, anticipating the presentation of the new Spring-Summer 2022 collection by Braccialini on the theme “Horizons”. 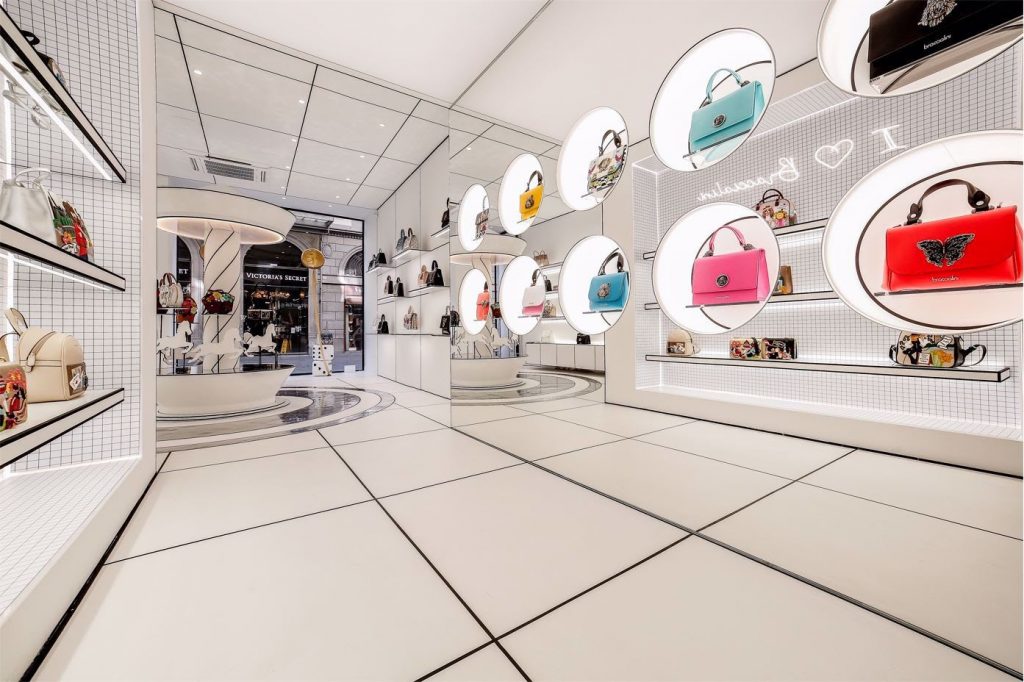 This Autumn,‘Fall’ in love with Starbucks Seasonal Indulgences