National Award winning actor, Ayushmann Khurrana has been making buzz with his upcoming family entertainer titled ‘Dream Girl’ and now the trailer is out, check it out:

The movie is already featuring in the headlines for all the right and funny reasons, packed with humorous one liners and comic sequences, promising a laugh riot.

In this movie, Ayushmann will play the role of Lokesh, who dresses up as female mythological characters for the local theatre shows. Along with it, he doubles as Pooja, who speaks to people as their phone-pal for a living. Most of the people on the other side of the phone fall in love with Pooja, leading to a confusing and chaotic situation which is hilarious.

The ‘Article 15’ actor has reunited with veteran actor Annu Kapoor for this film, who will play the role of his father. ‘Pyaar Ka Punchnama’ actress Nushrat Bharucha will play the role of Ayushmann’s love interest. The other cast includes Sumona Chakravarti, Manjot Singh and Abhishek Banerjee.

The film is directed by Raaj Shaandilyaa and co-produced by Ekta Kapoor and Shobha Kapoor under their banner Balaji Motion Pictures. The trailer has garnered 15 million views in less than 24-hour on YouTube.

Producer Ekta Kapoor shared a picture from the film’s trailer launch event and revealed in her post that the phone number given by the filmmakers to contact Pooja on the film’s poster, crashed telephone servers for five hours.

Poojaaaa I love uuuuu! Tera ko mein Teri! Sachiiiii smoocheeee! In other news the phone number given to call pooja CRASHED THE SERVER FOR FIVE HOURS ! Such was the traffic! Poojaaaa kyaaaa jaaadoooooooooo hai yehhh ur truly #DREAMGIRL

And the movie’s first song ‘Radhe Radhe’ is hitting the charts now!

Ahead of Janmashtami, the new song from the film has hit the internet. In this song, Ayushmann tries to woo his ‘Radha’-Nushrat Bharucha, in the most entertaining way. Composed by musician duo Meet Bros, the song is sung by the brothers along with Amit Gupta and the lyrics are penned down by Kumaar. Keeping the upcoming Janmashtami in mind, the composers have made sure that it is an upbeat track. The song is surely going to become the go to song for any stage performance in the coming days.

One can’t stop humming and dancing to its beats. The song is peppy, loaded with colours and sets a full-on nautanki mood.

Also, Nushrat posted a behind-the-scenes video on her social media in which Ayushmann cribs about being all decked up for his role in ‘Dream Girl’.

‘Dream Girl’ is set to release on September 13. 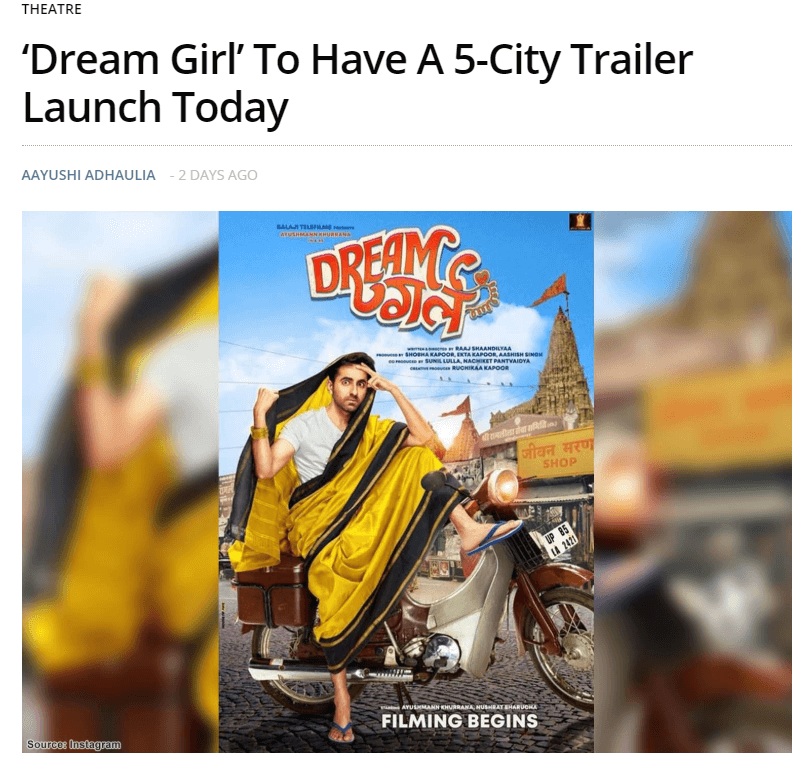