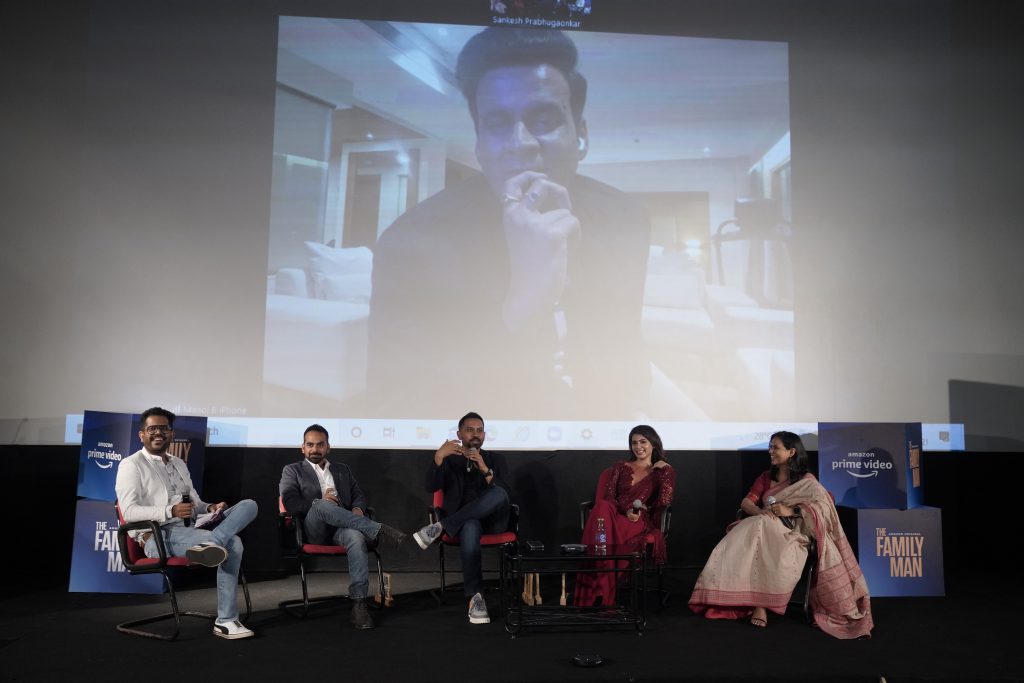 Amazon Prime Video, India’s most loved entertainment destination, curated a successful Masterclass on What Goes into Creating Cult Icons last evening, at the ongoing 52nd edition of International Film Festival of India (IFFI), Asia’s oldest and India’s most iconic international film festival.
The Masterclass on ‘Creating Cult Icons: India’s own James Bond (007)’ had the creators and talent of the award-winning Amazon Original Series The Family Man present. The show has been a catalyst in giving birth to a multi-faceted genre that has equal amounts of action, family drama, suspense, emotions, comedy, and more, all rolled into one. The global appreciation garnered by this series proves that viewers have an insatiable hunger for unique and unconventional, yet authentic and relatable entertainment that resonates deeply with their own culture and traditions while taking them on a flight of thrill and adventure. 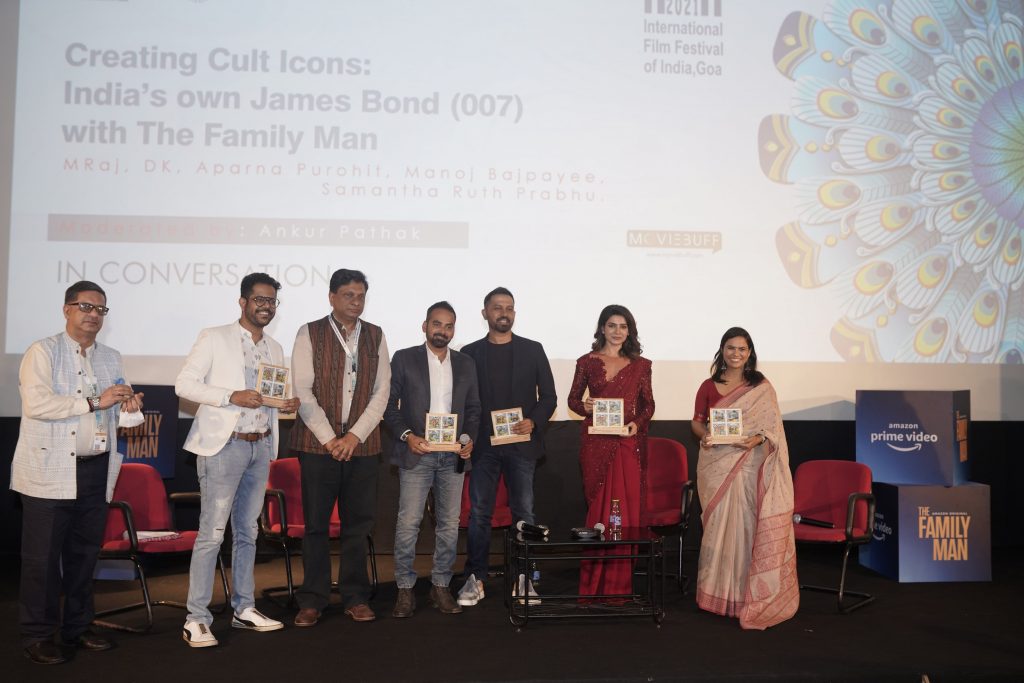 Moderated by Ankur Pathak, the interactive and insightful Masterclass had the dynamic creators of the show – Raj Nidimoru and Krishna DK, popularly known as Raj & DK, Aparna Purohit, Head of India Originals at Amazon Prime Video, along with the talented cast represented by Samantha and Manoj Bajpayee. The hour-long session highlighted the power of authentic storytelling portrayed through realistic incidents, humour, multi-layered and well-developed characters. It also brought to the fore the in-depth research and creative process that went into bringing to life a powerful narrative making The Family Man, Amazon Prime Video’s most viewed Indian Original Series both in and outside India.

Talking about her initial reaction to the show , Aparna Purohit, Head of India Originals, Amazon Prime Video India said “When the show was first pitched to me five years ago, and I heard the character of Srikant Tiwari, I realized that the character was distilled out of the everyday middle-class man that people could easily identify with. On one hand he is trying to thwart the biggest terror plot on the country and on the other, he is travelling in the local train, trying to sort his house loan, and evading demands to buy the latest mobile phone for his kids. It was this duality of the character that made it so relatable, and the story so exciting that it had to be told.” Sharing an anecdote after the launch of the first season, Aparna added, “Incidentally, when our colleagues at Prime Video Mexico saw The Family Man, they said that they felt Srikant Tiwari to be one of their own. And that goes to show that he truly is a quintessential family man and how much the show has become a part of popular culture.”

Adding to Aparna’s views, Raj & DK shared, “The resounding popularity of The Family Man can be attributed to the authenticity and realism that the character of Srikant Tiwari is rooted in. The idea of this character came from observing people in everyday life and we thought that if James Bond was from Chembur, how would he be?” Taking up the narrative, Raj added, “We wanted to create an authentic desi Bond – a common man, probably underpaid, juggling numerous family obligations, averse to risks, under-appreciated at his job, and definitely an unsung hero on a challenging mission. And that is where the different layers of the character of Srikant Tiwari came from.” 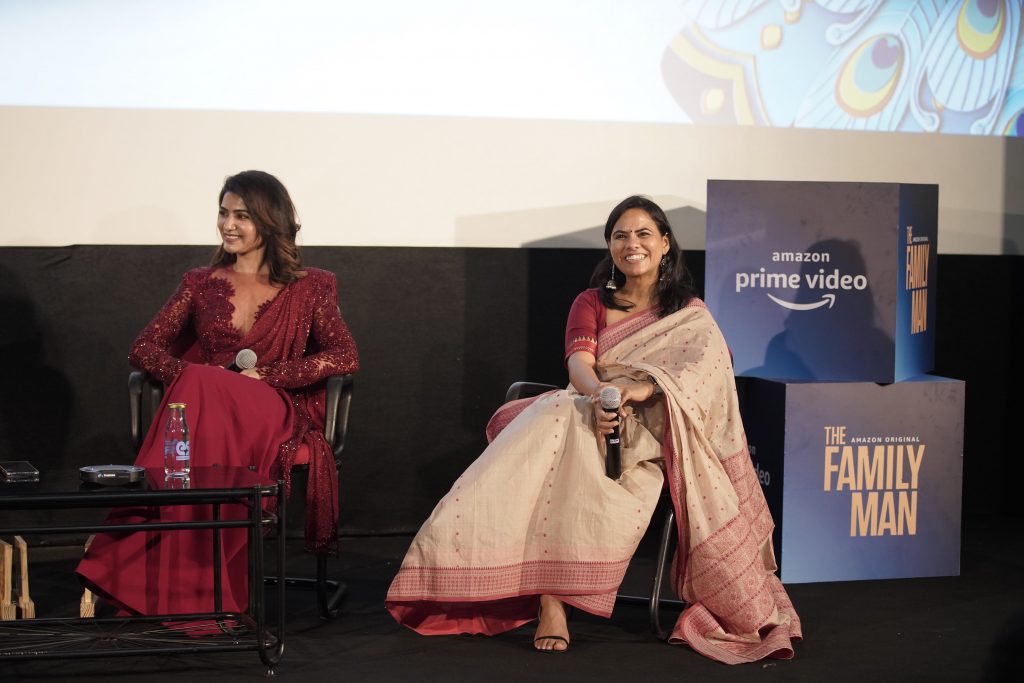 The highly versatile actress, Samantha, shared what drove her to essay the character of Raji. She said, “As an actor, I always want to push my boundaries and explore unfamiliar emotions. Female actors tend to get unidimensional characters and there is this fear of your performance becoming repetitive – which can happen if you choose roles that are in a familiar emotional space. However, with Raji it was very different and exciting. The role allowed me to explore a new dimension, something that had never been offered to me before. The actor in me could not refuse this challenge.”

Besides the ingredients for creating cult icons, the Masterclass had many takeaways for budding creators and talent attending IFFI, as they turn to streaming services with their story ideas and passion projects, with the dream of showcasing their work to the world.
Prime Video’s participation in IFFI is reflective of the increasing popularity, reach and growth of video streaming services in India and across the world. The year 2021 is being earmarked as metamorphic for the video streaming industry as IFFI for the first time ever, since its inception more than fifty years ago, has invited video streaming services to the festival. In addition to the Masterclass with the creators and cast of The Family Man, Prime Video will also host the exclusive world premiere of Amazon Original Movie Chhorii, and a Masterclass with the creators of Amazon Original Movie Sardar Udham, in the coming few days at IFFI. Additionally, in order to commemorate the birth centenary of the legendary filmmaker, Satyajit Ray, Prime Video is showcasing 11 of his iconic films, along with a special documentary on the service, timed with the dates of the festival (20th to 28th November).