As the Oscar fever grips cinephiles, Amazon Prime Video today announced the addition of new films from across the world on its service that have been nominated for the 94th Academy Awards®. Along with Being the Ricardos, that was added in December 2021 on the service, the streaming service will be adding titles including Dune, Spencer, and Lunana: A Yak in the Classroom. Customers will also be able to watch Drive My Car and The Worst Person In The World with an add-on subscription to Prime video channel MUBI. With these additions, Prime Video has extended its extensive library of Oscar nominated films on its service that includes films like No Time to Die, Another Round, Minari among others. 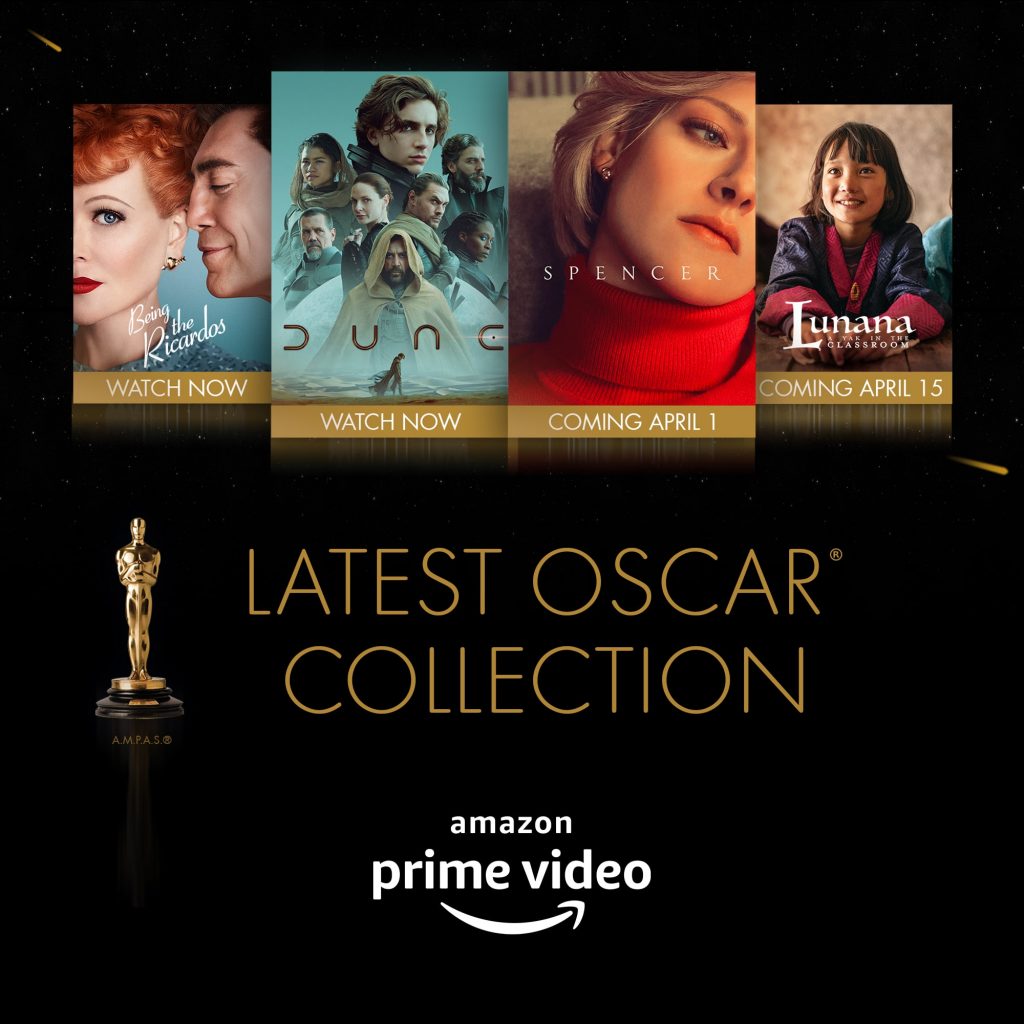 One of the biggest titles in 2021 Dune, which received 10 Oscar nominations at the 94th Academy Awards® namely Best Picture, Cinematography, Film Editing, Music (Original Score), Production Design, Sound, Writing (Adapted Screenplay), Costume Design, Visual Effects, and Makeup & Hairstyling, premiered on Prime Video on March 25th. Spencer (Nominated for Actress in a Leading Role- Kristen Stewart) will stream on the service starting April 1st, and the Bhutanese title Lunana: A Yak in the Classroom (Nominated for International Feature Film) will be available to stream on April 15th.

The Japanese title Drive My Car (Nominated for Best Picture, Directing, International Feature Film, and Writing- Adapted Screenplay) along with Norwegian title The Worst Person in the World (International Feature Film) and (Writing- Original Screenplay) will be available from April 1st and May 13th respectively on Prime Video Channel MUBI with an add on subscription. 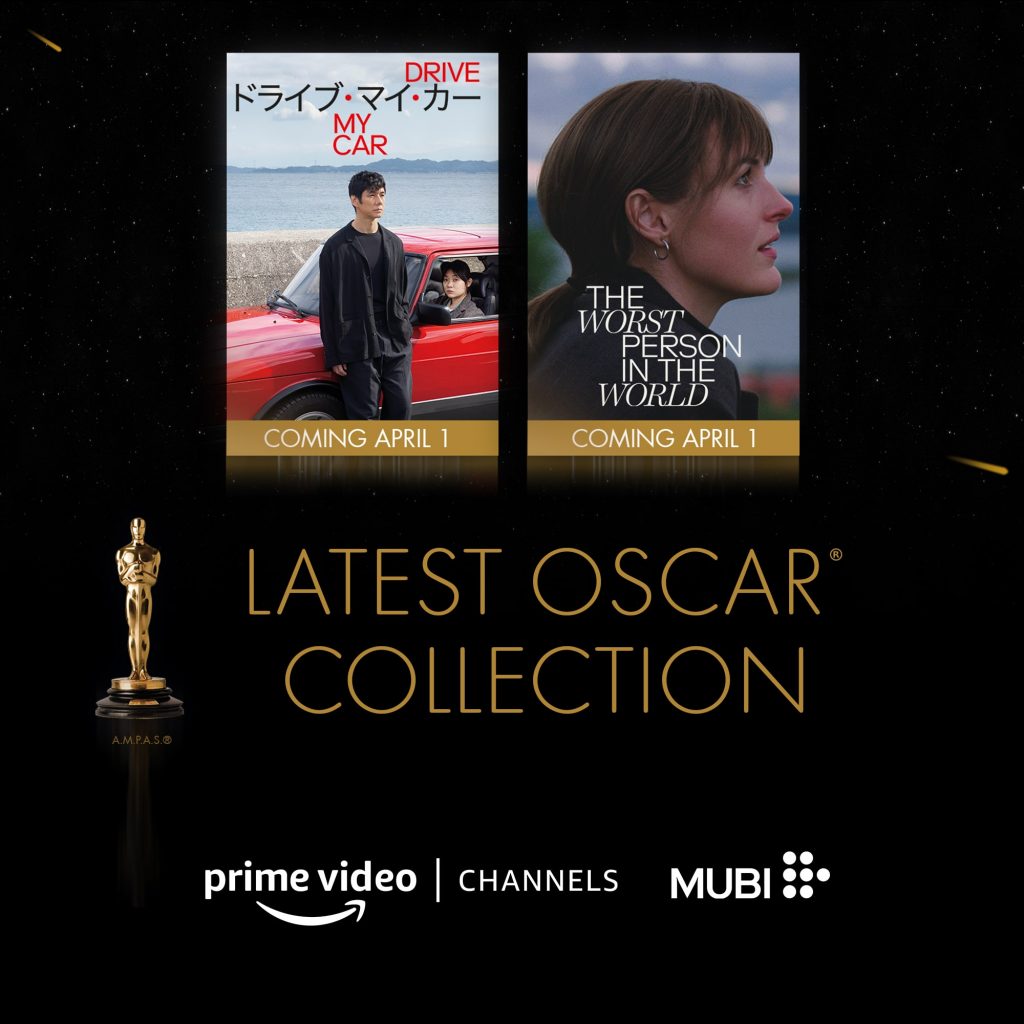 Aaron Sorkin directed Being The Ricardos that is based on the relationship between the lead actors of the hit 1951 TV show ‘I Love Lucy’ received three nominations at the 94th Academy Awards: Actor in a Leading Role for Javier Bardem, Actress in a Leading Role for Nicole Kidman and Actor in a Supporting Actor for J.K. Simmons and is currently available on the service.

Drive My Car, a Japanese title, is a masterful, moving and multi award-winning film based on a short story by Haruki Murakami. When the wife of Kafuku (Hidetoshi Nishijima), a stage actor and director, suddenly passes away, she leaves behind a secret. Two years later, Kafuku meets Misaki (Toko Miura), a reserved young woman assigned to be his chauffeur on a work trip to Hiroshima. As they spend time together, Kafuku confronts the mystery of his wife that quietly haunts him. Drive My Car will be available with English subtitles from April 1st on Prime Video Channel MUBI with an add on subscription.

A Yak in the Classroom is a Bhutanese film which is about an aspiring singer (Sherab Dorji) living with his grandmother in the capital of Bhutan dreams of getting a visa to relocate to Australia. The film will be available in Dzongkha (Original) + Hindi Dubs from April 15th.

Directed by Joachim Trier, The Worst Person in the World, a Norwegian title, is a wistful and subversive romantic drama about the quest for love and meaning. Set in contemporary Oslo, it features Renate Reinsve as a young woman who, on the verge of turning thirty, navigates multiple love affairs, existential uncertainty and career dissatisfaction as she slowly starts deciding what she wants to do, who she wants to be, and ultimately who she wants to become. The Worst Person in the World will be available with English subtitles on Prime Video channel MUBI with an add on subscription from May 13th.

Prime Video is a premium streaming service that offers Prime members a collection of award-winning Amazon Original series, thousands of movies and TV shows—all with the ease of finding what they love to watch in one place. Find out more at PrimeVideo.com.

Prime Video is available in India at no extra cost with Prime membership for just ₹1499 annually. New customers can find out more at www.amazon.in/prime.