Sony YAY! brings leading musicians of the country together to wield the power of music for kids

The power of music can play an instrumental role in kids’ life by instilling hope and inspiring a positive outlooks in them. With this objective in mind, Sony YAY! – the popular kids’ entertainment channel carries forward its tradition of bringing children closer to the power of music on this World Music Day. The channel was joined by the leading musicians of the country like Rekha Bhardwaj, Shankar-Ehsaan-Loy, Vishal Dadlani, Shaan, and Suneeta Rao who have donated their autographed musical instruments for kids who otherwise might not have the privilege of its access.

Through this initiative, the musicians and channel team up to empower kids to start on their much-awaited musical journey. Forces of the Indian music industry like Rekha Bhardwaj who has given us tunes like Sasural Genda Phool. donated her Digital Ragini for this initiative. The coolest sonic trio of the Hindi film industry Shankar-Ehsaan- Loy autographed a Ukulele, Clap Box, and Guitar respectively. Known for his epic romantic tunes and velvety voice, singer Shaan signed a Mandolin for the kids. Lastly, since the 90s fever is trending, the melody queen of the era, Suneeta Rao has also shown her support by signing a Bongo Drum. 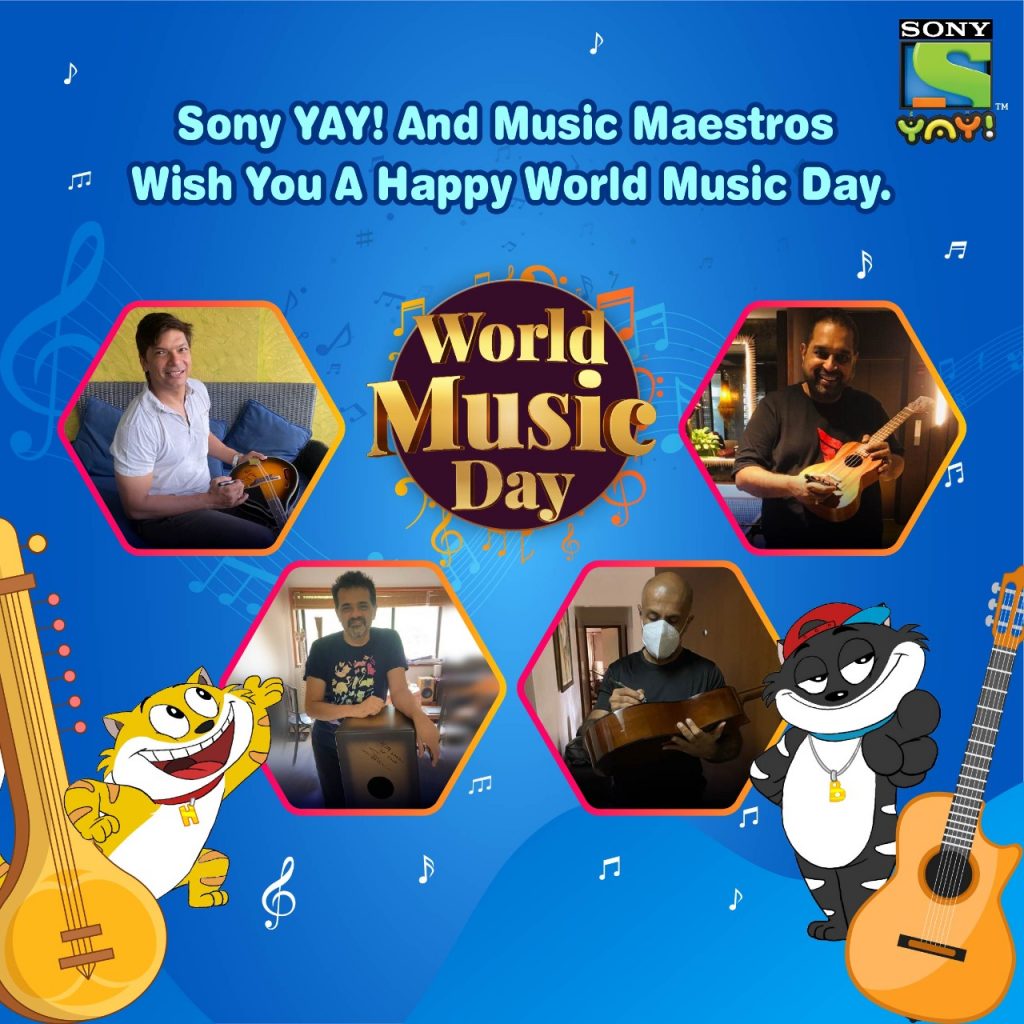 “It’s been a tough year for kids. Music has always gone beyond the boundaries of entertainment to be relaxing and healing thus aiding and empowering kids to overcome any challenges. Our initiative for world music day recognizes the need to reinforce the importance of celebrating music amongst kids. I thank each one of the musical heroes for participating and inspiring hope and positivity in the lives of kids.”

“Throughout my career, music has always taught me valuable life lessons. It has taught me patience and hard work and this World Music Day, I hope that children across the world learn the importance of perseverance and adopt the value of hard work. Through this initiative by Sony YAY!, I hope we bring inspiration in the lives of these kids.”

“It’s a difficult time for everyone as we all have been spending time at home in isolation. Having ample time at our disposal as we stay indoors, we must put some aside to celebrate a wonderful thing called music. For it is something that can be your friend, philosopher, guide, it can just be with you. So, on World Music Day, create, innovate, introspect and see what kind of talent you have and how much can you nurture it. I am extremely thankful to Sony YAY! and their entire team for helping us embark on this beautiful journey of music together.”

Sony YAY! is the first kid offering from Sony Pictures Networks, India. It’s vision is to be a part of kids’ everyday lives through various endeavours. A channel targeted at kids aged 2 – 14 years, Sony YAY! is here to set new standards and benchmarks in kids’ entertainment. The channel’s content is unique, fresh and relatable and is produced in India. The channel, within one year, produced 6 original shows which include  Honey Bunny ka Jholmaal – a slapstick comedy with hilarious adventures of an odd team of pets, Paap-O-Meter- a unique laugh-out-loud ghost comedy and KickO and Super Speedo – a tale of a super-kid and his futuristic gadget car who are out to save Sun City and Guru Aur Bhole – a musical comedy, etc. Available in Hindi, Tamil, Telugu, Bangla, Marathi, Malayalam, Kannada, Gujarati, and English. Sony YAY! is the first kids’ channel to be available in 9 languages. The channel has entered into licensing and merchandising, making their endearing characters a part of kids’ lives wherever they are.

The network is recognized as an employer of choice within and outside the media industry. SPN is a recipient of several awards, including India’s Best Companies to Work For 2020 by the Great Place to Work® Institute, India, ‘Aon Best Employers India’ awards in recognition of SPN’s unique workplace culture and exceptional people practices, consistently ranking amongst India’s Top 10 Companies with Best Health & Wellness Practices by SHRM & CGP Partners and listed by Working Mother & AVTAR as one of the 100 Best Companies for Women in India.