Prime Video unveils the trailer of Four More Shots Please! Season 3; the girls are back with triple the sass and fun 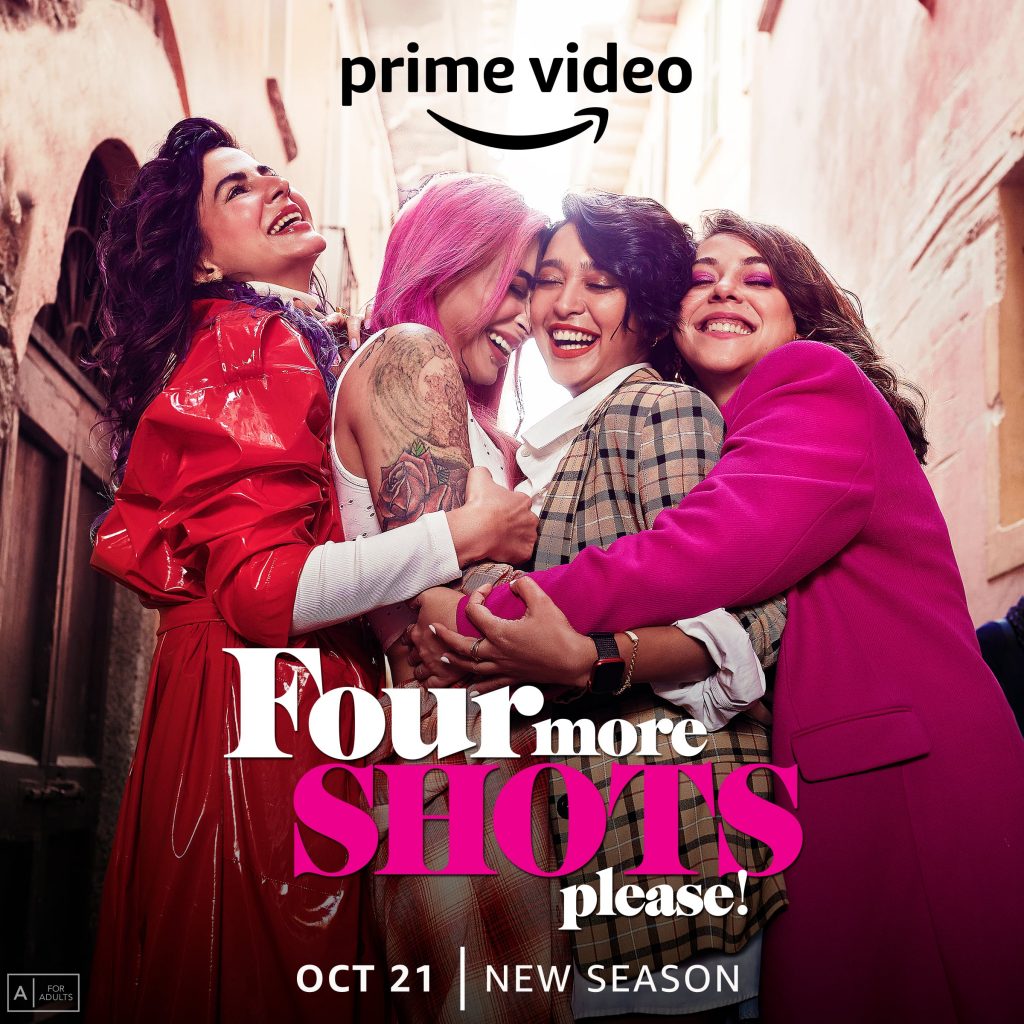 Prime Video today unveiled the trailer of the highly anticipated third season of its Amazon Original Four More Shots Please! With the new season, the girl gang is back with triple the fun and triple the sass as shown in the trailer. Starring Kirti Kulhari, Sayani Gupta, Maanvi Gagroo, and Bani J in the lead roles, Season 3 will see Prateik Babbar, Lisa Ray, Neil Bhoopalam, Rajeev Siddharth, Amrita Puri, Simone Singh, and Samir Kochhar reprising their respective roles whereas Jim Sarbh, Sushant Singh, Shilpa Shukla and Rohan Mehra will be the new faces in this season. Produced by Pritish Nandy Communications, created by Rangita Pritish Nandy and Ishita Pritish Nandy, directed by Joyeeta Patpatia and written by Devika Bhagat, with dialogues by Ishita Moitra, the much-awaited Amazon Original, the much-awaited Amazon Original will be available on the service, starting October 21 in India and more than 240 countries and territories.

Placeholder for the trailer link:

The trailer of the new season of Four More Shots Please! shares a riveting glimpse into the life of four friends – Anjana Menon (Kirti Kulhari), Damini Roy (Sayani Gupta), Siddhi Patel (Maanvi Gagroo) and Umang Singh (Bani J) who strive to navigate through the challenges of life, love and their own flaws. With new faces and old, and an intriguing storyline, the third season of Four More Shots Please! promises to be the most personal season for these 4 women, packed with heady romance, drama, humour, relationships, and of course, their forever friendship.

Talking about the show, Sayani Gupta shared, “The first two seasons were incredibly popular and got so much love and appreciation from the fans. The third season will see the girls having more fun, their camaraderie deepening, their fierceness expanding, but also their acceptance of their frailties. I am very excited for the viewers who have been writing in every day, asking about the third season, to watch the show!”
Sharing her excitement, Kirti Kulhari said, “It’s the love for 4msp that keeps pushing us to do better every season. Hoping that we have managed to do it one again . This season the girls are sassier , sexier and more empowered to make their mistakes and learn from them”

“With the new season of Four More Shots Please! we are leveling up from where we left the last season and offering a deep dive into the character arcs that would intrigue the viewers,” said Bani J. “From various complexities in personal and professional lives, to coming to making conscious efforts and decisions to bring back lives on track, the new season is packed with a lot of ups and downs for the viewers. I am sure they will be intrigued to see where the lives of the four girls will go after the challenges and setbacks that they faced in Season 2.”

“I am thrilled for the new season of Four More Shots Please! as this season will show a different side of Siddhi, as she continues to deal with a personal loss in the series,” says Maanvi Gagroo. “In the new season, Siddhi will make mistakes, she will face challenges, she will stumble and fall more than a few times. But, she won’t give up. I sometimes relate to Siddhi a lot and honestly, I’m always rooting for her. I am glad to be back on Prime Video with the new season for the audiences not just in India but across the globe.”

Amazon Prime Video is a premium streaming service that offers Prime members a collection of award-winning Amazon Original series, thousands of movies and TV shows—all with the ease of finding what they love to watch in one place. Find out more at PrimeVideo.com.

● Instant Access: Prime Members can watch anywhere, anytime on the Prime Video app for smart TVs, mobile devices, Fire TV, Fire TV stick, Fire tablets, Apple TV and multiple gaming devices. Prime Video is also available to consumers through Airtel and Vodafone pre-paid and post-paid subscription plans. In the Prime Video app, Prime members can download episodes on their mobile devices and tablets and watch anywhere offline at no additional cost.
● Enhanced experiences: Make the most of every viewing with 4K Ultra HD- and High Dynamic Range (HDR)-compatible content. Go behind the scenes of your favourite movies and TV shows with exclusive X-Ray access, powered by IMDb. Save it for later with select mobile downloads for offline viewing.
● Video Entertainment Marketplace: In addition to a Prime Video subscription, customers can also purchase add-on subscriptions to other streaming services, as well as, get rental access to movies on Prime Video.
● Prime Video Channels: Prime Video Channels offers friction-free and convenient access to a wide range of premium content from multiple video streaming services all available at a single destination – Amazon Prime Video website and apps. Prime Members can buy add-on subscriptions and enjoy a hassle-free entertainment experience, simplified discovery, frictionless payments and more.
○ Rent: Consumers can enjoy even more movies from new releases to classic favourites, available to rent – no Prime membership required. View titles available by visiting primevideo.com/store. The rental destination can be accessed via the STORE tab on primevideo.com and the Prime Video app on Android smartphones, smart-TVs, connected STBs and Fire TV stick.