After Throwback Thursday and Flashback Friday trend, Throwback Tuesday has been started by producer-director Karan Johar.

KJO took to his social media handle sharing the picture from the sangeet party of Sanjay Kapoor and Maheep Kapoor’s wedding where we can see superstar Shahrukh Khan shaking his leg. The picture also has Karan Johar who is awkwardly trying to dance along with Srk in the background.

Along with the picture, KJo also wrote, “Throwback to @sanjaykapoor2500 and @maheepkapoor ‘s sangeet! The superstar shakes a leg and don’t miss the out of sync background dancer! #throwbacktuesday”.

Throwback to @sanjaykapoor2500 and @maheepkapoor ‘s sangeet! The superstar shakes a leg and don’t miss the out of sync background dancer! #throwbacktuesday

Soon the special picture of Johar received comments from both Sanjay and Maheep Kapoor, where Sanjay quoted the exact date of the ceremony. 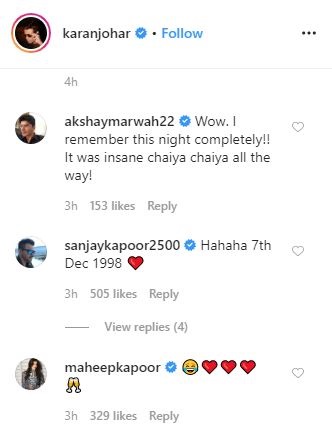 A Surreal Experience Of Rohit Sharma