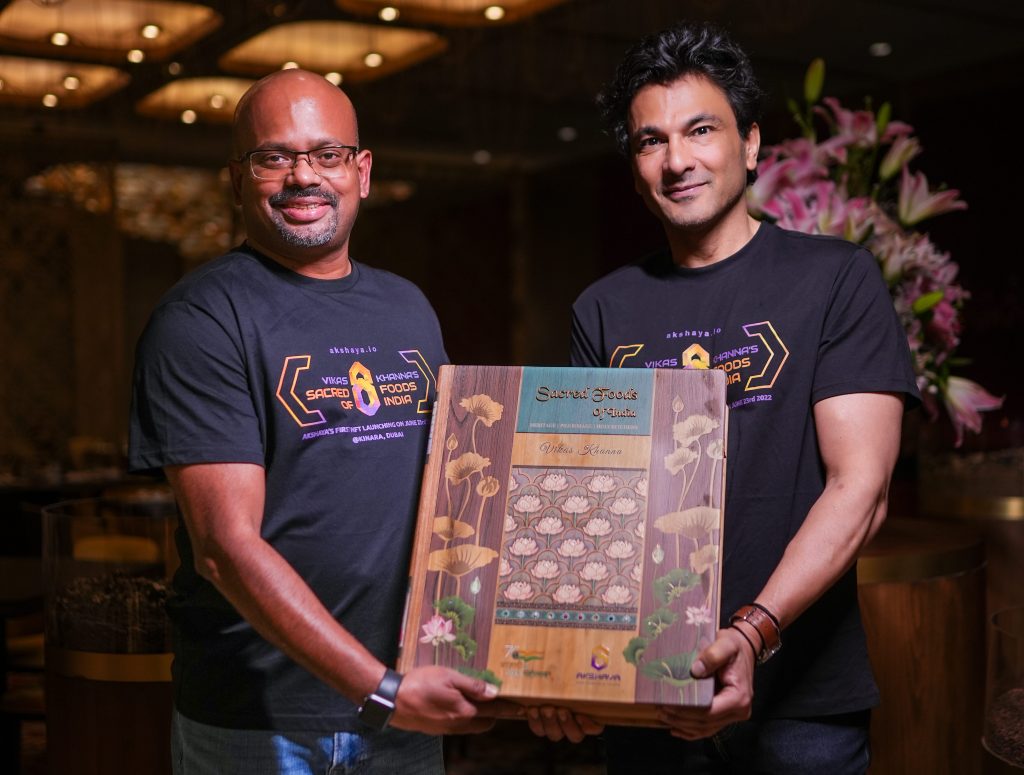 Akshaya.io, World’s first ‘Phygital’ platform has launched first-ever digital twin and NFT of ‘Sacred Foods of India’, a limited-edition book by Michelin Star awarded Chef Vikas Khanna, in Dubai on Thursday. The first Phygital unit of the sandalwood book was bought by Mr. Sanjeh Raja from ICCA (international Centre of Culinary) at a price of $50000. This magnum opus work by Chef Vikas Khanna is a limited-edition book that brings recipes of prasad, and foods served at various holy places around the country.

Starting June 25th, Sacred Foods of India can be ordered from Akshaya website (www.akshaya.io), and NFT of the book will be minted immediately along with its
“digital twin”!
This twin will be connected to the physical book itself and is unique to the owner of the physical copy
Platform allows users to buy using their crypto wallet or any form of fiat currency

Akshaya.io has created Non-Fungible Tokens (NFTs) of the book which will enable Vikas Khanna’s fans and those interested in rare collectables to own original NFT along with physical book. This purchase will authenticate the originality of this limited- edition work, and ownership of the asset cannot be duplicated in any form. This is the first-ever collaboration for Chef Vikas Khanna with a Web 3.0 enterprise, and in the times ahead, there is a possibility he can create more augmented reality
(AR) and virtual reality (VR) assets of his works and creations. 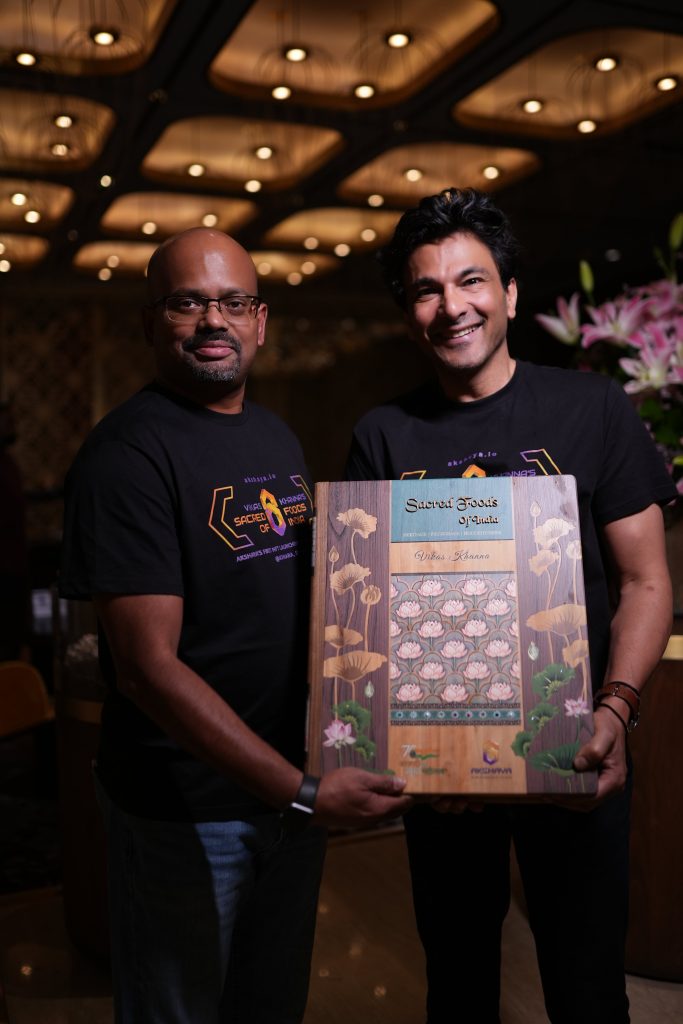 Rare Gemstones, Swarovski crystals and embellished with gold gilding. The book comes in creatively engineered Walnut and Maple wooden box or highly limited edition (only 2) of pure Sandalwood box, acquired with official Indian Government Certifications. The paper used is acquired from special sources from Italy, that will last for generations, which is also treated with embossed knurling to give that canvas painting feel. Vegetable ink sourced from Japan is used for printing the scripts. Even the glue used is vegetable glue, researched and developed in Germany.

Speaking at the launch, Mr. Ganesh Raju, CEO, Akshaya.io said, “Starting today, World is going to witness a new evolution in the digital space! And we are happy to partner with a ‘Brand’ by himself, Vikas Khanna, to create NFTs of his greatest work to date. Web 3.0 will transform the way in which enthusiasts of unique collectibles will engage with him. Considering Chef Vikas Khanna’s popularity and the uniqueness of this book, we expect the NFTs of this work will acquire great eminence as time passes. We are very excited as the first sandalwood phygital unit of the book is sold at 50000$. What a great Start! ”

“In these fast-changing times when the world of internet is metamorphosing into the future rapidly, it is important we take the big leap forward. ‘Sacred Foods of India’ is very dear to my heart, and I wish this will be a prized possession for those who are interested in buying or investing into works of passion. I am happy to be associated with Akshaya.io, World’s first ‘Phygital’ platform, which will enhance user experience by generations. The clarity in vision of those behind Akshaya.io makes me believe, together we are going to create a great asset via this launch. I welcome one and all to be a part of my journey, as I take a giant vault into the new age of internet,” added Chef Vikas Khanna.

While the technology world has been talking about augmented reality (AR), virtual reality (VR), machine learning (ML), and artificial intelligence (AI), the emergence of Metaverse, which can be defined as a simulated digital environment using all the earlier mentioned tools along with blockchain, is all set to mimic the real world. The new-age digital spectrum has created new assets and built avenues to trade with them. Non-fungible tokens (NFTs) are digital assets using which one can trade across products, including online- only assets. A NFT is a non-interchangeable unit of data stored on a blockchain that can be sold or traded. Metaverse, NFT combined with other advanced tools is Web 3.0 transformation which the World has started to experience.

Akshaya.io is country’s first ever platform that brings Metaverse, NFT, and Digital Twin together to enable users claim ownership of physical + digital assets with certified proof of authenticity. From those interested in dealing with unique collectibles to rare artifacts, Akshaya.io will be a healthy community of highly astute customers.

Since its inception, Akshaya.io has created excitement among companies trading in jewelry, boutique furniture, artifacts, sports, entertainment, and other sectors, and is all set to sign many prominent Brands, Enterprises, and few celebrities as partners. Akshaya.io will be the first ever platform to provide the best experience of physical and experiential shopping in the virtual world. This is the only platform which will enable customers experience and own both digital and physical variants of any and every asset.

Akshaya.io has to date invested USD 10 million, through internal accruals from founder and seed investors, to build a robust technology platform that is all set to provide a unique experience to its partners and customers. The money invested has gone in to develop the backend software and to strengthen Network across India. Currently, Akshaya.io has physical offices across 45 cities in India, Bangladesh, and Nepal, and has developed strong connect with prospective partners. Partners will create or add their NFTs to Akshaya.io platform to be sold or traded.

Vikas Khanna is an internationally acclaimed Indian American chef, film maker, and author. He is a James Beard nominee and one of the first Indian chefs to be awarded a Michelin Star in the U.S. He has been featured amongst the 10 most influential chefs in the world by Deutsche Welle and Gazette Review. He is the host of MasterChef India, Twist of Taste and Mega Kitchens on National Geographic. Author of 38 award winning books, including UTSAV (World’s most expensive cookbook) and the creator of documentary series Holy Kitchens and Kitchens of Gratitude. He founded the Museum of Kitchen Arts, which is home to thousands of India’s unique kitchen tools and equipment, located at his alma mater, WGSHA, Manipal, India. His restaurants, Kinara and Ellora in Dubai are rated as Favorite Indian restaurant by Conde Nast. His

initiative Feed India served more than 65 million meals during the Covid-19 Pandemic. The Last Color marks
Khanna’s debut as a film writer and director which was eligible for OSCARS race for Best Feature, 2020.

All secrets are spilled as “Secret Sauce for a Successful Restaurant” makes a comeback!

Flax a restaurant for all things healthy - Satiate your appetite without guilt!